If the football gods have any sense of decency and payback, Alabama sophomore placekicker Leigh Tiffin won't miss a field goal on Saturday against Arkansas (6:45 p.m. ET, ESPN).

Even if it's storming, his kicks will fly true.

"That would be nice," Alabama quarterback John Parker Wilson said, "even though I prefer scoring touchdowns."

Even if there's a Category 3 hurricane blowing through Bryant-Denny Stadium, he'll still drill the ball right through the wind.

"It would be a wonderful day if it works out that way," said Van Tiffin, Tiffin's father, regarded as the greatest placekicker in Alabama history.

Even if there is a bad snap or unsteady hold, his leg will strike the ball as steady and mechanical as the pendulum in a grandfather clock.

Because if there's anybody who deserves a mulligan on his career, it's Tiffin. His Cinderella freshman season ended almost as quickly as it started a year ago, his glass kicking slipper shattering under the pressure of an overtime thriller at Arkansas.

Whether you observed the game in person in Fayetteville or on TV, it was difficult to watch a baby-faced teenager, who had been on campus about six weeks, miss two game-winning field goals and an extra point that allowed Arkansas to escape with a 24-23 victory.

"I still blame myself," said Tiffin just last weekend after making 3-of-5 field goals in a 24-10 Crimson Tide victory at Vanderbilt. "It's my job to make field goals. When they send me out on the field, they don't send me out there to see if I can make it. I'm supposed to make it."

Just two weeks before the meltdown against the Razorbacks, Tiffin, subbing for injured starter Jamie Christensen, was named the SEC's Special Teams Player of the Week. He hit a game-winning 47-yard field goal against Vanderbilt.

The next week, after Tiffin's mind-numbing misses, those same message boards spewed venom like this item found on tidefans.com: "Tiffin is not his daddy, he can be all the practice player that he wants to be. But when it comes down to a game we need game players not practice players."

There's no doubt that if Tiffin had been a kicker at another school and missed the same field goals, the reaction wouldn't have been as severe and as personal.

But when your daddy is Van Tiffin, whose 52-yard game-winning field goal against Auburn in 1985 hangs as a Daniel Moore painting titled "The Kick" in living rooms, restaurants and sports bars throughout the state of Alabama, the failure is magnified.

I've been hearing about this game for three weeks. The main thing is I can't psyche myself out for this game.

-- Leigh Tiffin on the Arkansas game

Leigh knows he could have taken the easy way out. As a senior at Muscle Shoals (Ala.) High, he had scholarship offers to lower division schools. Other SEC schools wanted him to walk-on.

He never backed away, though, from the challenge of walking on at Alabama where his dad created a shadow for him as tall as the Denny Chimes.

"You've got to be as good as they were and better to make a name for yourself," said Leigh of living to his Dad's steep legacy. "There's a lot of expectations to live up to. But I've learned if you're worrying about anything other than what you're trying to do, you don't have a very good chance at being successful."

It was never Van's intention that Leigh carry on the family tradition. Van probably would have been just as happy if Leigh had decided to play the trombone.

"But one day, when we'd just moved to Muscle Shoals for the first time, I was outside doing yard work," Van said. "Leigh was about seven or eight years old. I noticed he'd gotten a tee and a football, and circled the house kicking the ball over and over.

"A few years later when he expressed an interest in kicking, that's when we went to the football field and got a bit more serious about the fundamentals of it."

Van said he never tried to dissuade Leigh from playing for Alabama. And he never said a word about the pressure he would encounter, but Van didn't have to, because it was just understood.

When Leigh cracked last year at Arkansas, it had nothing to do with the pressure of being Van's son. It had everything to do with being an 18-year old freshman feeling all 74,687 live eyes and a national TV audience staring a hole through him.

Leigh later looked at the game tape once.

He saw himself miss a 30-yard field goal with 3:06 left in regulation, which would have given Alabama a 20-17 lead.

And miss a 37-yard field goal wide right that could have won the game in overtime.

And after Alabama scored a touchdown to take a 23-17 lead in the second overtime, he missed the extra point. Arkansas followed with a touchdown of its own and made its extra point to win the game. 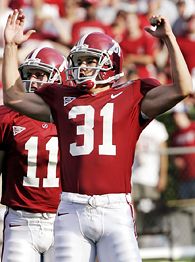 "Mechanically, I knew exactly what I did wrong," Leigh said. "I wasn't squaring my hips up to the target and following through. A lot of that could be pulling your head up because you're so anxious to see you make a big kick. You've got to discipline yourself and focus on the spot and watch the ball.

"Emotionally, I let the Adrenalin and stress of the game get to me. Yeah, I was timid. I was paying way more attention to how nervous I was and how I felt than what I was doing. That's a big lesson to learn. You've got to zone in when it counts."

What compounded Leigh's failure was he barely got off the bench the rest of the year. Christensen healed from a groin pull. Coach Mike Shula, then the Tide's coach, seemed to have no faith in Leigh. He got a chance to kick a couple of extra points in a meaningless 38-3 October blowout of Florida International.

"It messed with my head a bit," Leigh said. "You come off such a bad game and when you don't get a chance to kick much again, you really doubt yourself sometimes."

There were a lot of soothing phone calls from Van and his wife Michelle, reassuring their son brighter days were ahead.

"I just told Leigh the standard, 'Keep your head up, stay positive, keep working'," Van said. "That doesn't go a long way in helping him get over it. Anything traumatic like that, it just takes time to get over it."

One of the first things Leigh did in the days following the Arkansas game was to remove his Facebook page from the Internet.

"It was bombarded [with not-so-friendly comments]," Leigh said. "It's easy for fans to criticize, but a lot of them can't kick it across their front yard. It's something you've got to realize and take it with a grain of salt."

The firing of Shula and his staff might have been the best thing that could have happened to Leigh, who got a fresh start under new Tide coach Saban.

"I was going to work just as hard, no matter what happened, because you can't quit after something like that [the Arkansas game], you've got to bounce back," Leigh said. "But it [the coaching change] was great, I didn't have that stigma of having that rough game on me."

"There's not much that happens around here in games, even if they happened 25 years ago, that you don't hear about," Saban said with a laugh. "But last year's game doesn't really matter unless it bothers you. Leigh has done a really good job for us. I still think he's a young player developing confidence at this point."

Funny thing is, Leigh is about in the same situation as last year, except he's older and wiser. He emerged from training camp as the starter, partially because Christiansen injured a quad muscle, but mostly because Leigh drilled 7-of-9 field goals in the first two scrimmages.

'Bama's season started two weeks ago, and so far Leigh has kicked 4-of-8 field goals, with 8-of-8 extra points. But he understands his season -- and probably his career -- starts in earnest on Saturday.

"I've been hearing about this game for three weeks," Leigh said. "The main thing is I can't psyche myself out for this game.

"A kicker really plays against himself every game. It doesn't matter which team he plays, it's the same crowd, same field.

"I hope it does come down to a game-winning field goal. Because I'm going to be ready for it."

Ron Higgins covers the Southeastern Conference for the Commercial Appeal in Memphis.