Noel Devine didn't have any John Denver in his iPod before he arrived in Morgantown, W.Va.

He still doesn't, actually, and probably never will, but "Take Me Home, Country Roads" is beginning to grow on him. That's the Denver song they crank through the Milan Puskar Stadium loudspeakers after every win. Which means they crank it a lot. 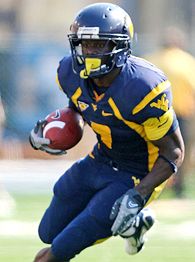 When a 48-7 victory over East Carolina Saturday prompted yet another massive stadium sing-along, somebody asked Devine, West Virginia's sizzling freshman running back, what he thought of the ritual.

"The atmosphere here, I love it," he said, flashing a smile lit by gold-capped teeth. "It's something way different from back home."

"There will be a lot of motivation and a lot of support there for me," Devine said.

The 5-foot-8, 175-pound Devine grew up amid tumult and tragedy in Cape Coral, 125 miles south of Tampa. He also grew into a nationally renowned, game-breaking, YouTube legend at North Fort Myers High.

One popular clip shows Devine spinning and bouncing and racing his way through tacklers like a video-game character on a simple screen-pass-turned-90-yard-touchdown.

"I was there for that," says North Fort Myers athletic director Erik Timko, then an assistant football coach at the school. "It was his freshman year, and it was one of those things where you just shook your head and said, 'That's not right.'"

The team's head coach, James Iandoli, did some head-shaking of his own early in Devine's freshman year.