Fans who used to sleep in for Cincinnati football games are now sleeping out for them.

Take sophomore Lance Durbin, for example. He likes football, but he knew nothing about the team when he enrolled at Cincinnati and had no idea if he'd ever care enough to attend a game. 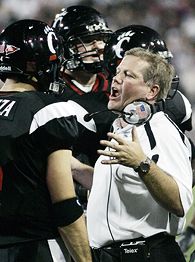 Two years later, the man is prepared to camp out in a tent to ensure he won't miss one.

Durbin said he and several other students were planning to spend Tuesday night outside the Nippert Stadium box office in order to be first in line Wednesday morning for tickets to the Oct. 13 Louisville game.

This is what successful, entertaining football has wrought. Besides, what's the alternative -- the Bengals?

"I've gone to every game this year and I'm excited for the rest of the season; that's for sure," said Durbin, who works in student government. "The whole atmosphere is so different now. Everyone talks about the games. You see a lot more UC apparel when you're walking around campus, and the football players are kind of like celebrities around here now.

"You feel like you're at a big-time football school."

That's been the idea for some time. Dynamic new coach Brian Kelly intends to see it through. Kelly's team is riding an eight-game winning streak, third-longest in the country behind Wisconsin (14) and LSU (12), and has outscored its first five opponents this season, 232-53.

The Bearcats will put their streak on the line Saturday in a grudge match at No. 21 Rutgers (ESPN2, 8 p.m. ET). It is the Big East opener for both teams. Rutgers is the team holding the grudge.

The Scarlet Knights started 9-0 last season and were clinging to their highest ranking ever (No. 7) when they were ambushed at Nippert Stadium, 30-11. That was the night Cincinnati began its eight-game run and returned to the national football map. A national television audience saw the crowd spill onto the field for a wild postgame celebration.

Rutgers fans would love to return the favor. Cincinnati is 0-6 all-time at Rutgers.

"We went up there two years ago, and it was not a very good environment," said Bearcats senior safety Haruki Nakamura, recalling a 44-9 loss. "They're pretty brutal fans. Their student section is very proud of their program -- very loud, very hostile. I mean, it's one of those atmospheres we were yearning for at the University of Cincinnati."

It's finally here. The Bearcats will return home for the Louisville game (ESPNU, 7 p.m. ET) and play in front of their second sellout crowd of the season. That's one more than ancient Nippert Stadium (built in 1902) has hosted in a single season since it was expanded in 1992 and only its 15th since 1946, according to associate sports communications director Kelby Siler.

The West Virginia game Nov. 17 also is sold out, and a record crowd of 35,097 watched the Bearcats maul Marshall two weeks ago. The school was even forced to enact ticket distribution policies aimed at accommodating more students.

That sure beats begging people to come out.

Kelly, basing his model on the Duke basketball team's relationship with fans at Cameron Indoor Stadium, promised to instill an "electric" atmosphere to Nippert, where even last year's big game against Rutgers played to a crowd 7,000 below capacity.

"That's why we run into the student section before the game, to let them know they're the first people we want to engage with," Kelly said. "Afterward, we go into the student section with the band and sing the fight song. It creates an energy that's unlike any event. Football wasn't the primary sport here, you know. It was basketball. There was no excitement in the stadium."

The players remember all too well. 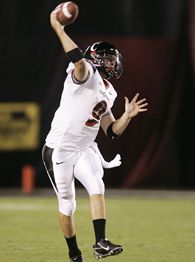 "It's a whole lot different now than when I first got here," said senior running back Greg Moore, from nearby Dayton. "Back then, the majority of the fans were like family or close friends of the family. Now, it's everybody. I have everyone calling me from back home to get tickets."

Ever seen anyone sleeping out on campus for football tickets before?

"Nope," Moore said. "We've only seen that for basketball."

Cincinnati football has been moving forward -- albeit in fits and starts -- for a decade. Rick Minter took the team to three bowl games in his final four years as coach before he was replaced by Mark Dantonio in 2004, a year before the Bearcats joined the Big East.

Dantonio oversaw a 7-5 regular season in 2006, culminating with the victory over Rutgers. He was announced as Michigan State's new head coach nine days later, but not before he predicted the Bearcats would win a Big East title "within three to five years."

Kelly, who arrived from Central Michigan, seems intent on moving up the timetable. About 15 seconds after he stepped foot on campus, he announced, "The 2007 season is about winning championships." He won two Division II national titles at Grand Valley State and a MAC title in his third year at Central Michigan.

The son of a Boston politician, Kelly, 45, worked as a press agent for Gary Hart's presidential campaign in 1988. He has yet to meet a public speaking opportunity he didn't embrace.

"He's a salesman, is what he is," says Grand Valley State coach Chuck Martin, who was Kelly's defensive coordinator at the school. "Whether it's Grand Valley State or Central Michigan or Cincinnati, he has kids believing they can move mountains. His No. 1 strength is offense. His No. 2 strength is how good he is politically at getting people to believe in his program. He sells it door to door, which not a lot of coaches will do.

"I remember at Central Michigan, somebody asked him how long the rebuilding cycle would be. He said, 'About 10 seconds.'"

Nakamura won't soon forget Kelly's first meeting with the team. Players were upset about Dantonio's departure and skeptical of a new regime as they prepared for the International Bowl against Western Michigan.

"When he first walked into our new meeting room, you could feel this energy," Nakamura said. "There was just this spark about him. The second he started speaking, the excitement in his voice was just awesome. He said, 'My goal here isn't to rebuild, it's to win a Big East championship.' He basically said, 'I'm a winner.'"

The biggest on-field difference between Kelly and Dantonio is Kelly's spread offense, which is run by Wake Forest transfer Ben Mauk and averaging 46.4 points per game. Rutgers coach Greg Schiano calls it one of the most innovative schemes he has seen. Kelly calls it his "coast-to-coast" offense.

"I've stolen great stuff from one coast to another," he said.

Cincinnati's nonconference schedule wasn't nearly as daunting as last year's, which included trips to Virginia Tech and Ohio State. The most impressive victory so far was a 34-3 pounding of Oregon State.

Kelly hasn't changed much on a defensive unit that was solid under Dantonio and is allowing just 10.6 points per game, fourth-best in the country. Cincinnati leads the country in turnover margin (plus-2.8 per game).

There's no telling if all these impressive numbers will hold up over the course of a rugged Big East schedule, but this much is certain: Nobody's going to sleep through the season.