Two years ago, Omar Jacobs never left the house without a beanie on his head.

Jacobs, then the star quarterback for Bowling Green, had seen his popularity skyrocket after passing for a nation-high 41 touchdowns in 2004. With sickly stats and an eye-catching hairdo, Jacobs was forced to disguise himself to dodge his adoring masses. 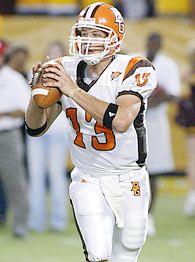 "People see dreads and they think, 'Omar,'" Jacobs said at the time.

Tyler Sheehan doesn't have the name, the track record or the modish 'do to attract hordes whenever he leaves his room. But a recent walk across campus hinted at what could soon be in store for Sheehan, Bowling Green's new standout quarterback.

"Somebody had a T-shirt on with my name and number on the back," Sheehan said. "It was like a homemade shirt. I didn't get to read what it had on the front.

What's really weird for Sheehan is being compared to Jacobs and Josh Harris, the quarterbacks who revolutionized the position at Bowling Green. Sheehan "idolized" both players and was nervous to talk to Jacobs when he met him on his recruiting visit.

After only four games as the Falcons' starter, Sheehan balks at being placed alongside the big two.

"I still feel like they're high up on the food chain," he said.

The 6-foot-3, 225-pound sophomore ranks eighth nationally in passing average (326 ypg), ninth in total offense (335 ypg) and fourth in completions per game (31.8 cpg). He has led the Falcons to their first 3-1 start since 2003 and kindled hope for a title push in the perennially wide-open MAC.

Did anyone foresee this from a guy who entered the season with 43 collegiate pass attempts and no starts?

"I'd like to say, yeah, but no," Falcons coach Gregg Brandon said, laughing. "Not this quick."

Toward the end of training camp, Sheehan inched ahead of Turner and was named the starter Aug. 27, five days before the season opener at Minnesota.

"The main thing we stressed is accuracy," Brandon said. "That's where he stepped up."

A change in Sheehan's throwing motion perfected his precision.

He was a side-armer at LaSalle High School in Cincinnati, slinging the rock in a one-back, shotgun spread offense, similar to the one Bowling Green runs. Though Jacobs also threw sidearm and displayed pinpoint accuracy at Bowling Green, offensive coordinator Mick McCall had Sheehan take a conventional throwing approach.

"I'm trying to come over the top more now, point my shoulder," Sheehan said. "Coach McCall, he told me when he recruited me that he was going to switch it up. I had no problem with that. I figured he knew more than I did."

Sheehan has completed 66.8 percent of his passes this season, throwing 10 touchdowns and four interceptions.
He began the season by completing seven consecutive passes against Minnesota, including a 53-yard touchdown to Eric Ransom on the fourth play from scrimmage. Sheehan also caught a 24-yard touchdown from wide receiver Corey Partridge before his first incompletion midway through the first quarter.

"It's every football player's dream to go play a big-time team if you're not on one," Sheehan said, "just go in there and show 'em what you can do."

Sheehan finished the first half 16 of 24 for 211 yards, eclipsing his passing total from the previous season (192). But could he perform in crunch time?

Down 24-21 with 2:12 remaining in regulation, Sheehan took over at his own 14-yard line and engineered a 12-play drive, setting up Sinisa Vrvilo's tying field goal with three seconds left.

After Minnesota struck first in overtime, Sheehan hit Marques Parks for a 9-yard touchdown. Down 31-30, the Falcons could tie with an extra point, or go for two and the win.

"I was kind of surprised," Sheehan said. "I started running off the field and one of my coaches pulled me back on. Being an underdog like that and going into an environment like that, it's the right thing to do."

Especially when you have a patented two-point play.

There's no formal name for the Falcons' conversion attempt, which sends an outside receiver in motion and, like most of their plays, gives the quarterback multiple options.

But the players believe in it. Big time.

"The DB, we were talking the whole game," said Falcons wideout Freddie Barnes, referring to Minnesota senior safety Jamal Harris. "That's when I just told him, with a big smile on my face, that the game was over.

The hardest part was getting the ball snapped.

"We're supposed to be on a timed cadence where the center has to hear [Sheehan] call the cadence," Barnes said, " but it was so loud in there. Tyler knew he had to go on silent. He made sure he let the center and the linemen know that, 'Coach don't like me doing this, but we've got to do it to win the game.'

"That showed a lot of poise on his part."

Barnes, the motion man, didn't realize Sheehan was going on a silent count until he ran past the tight end. He slowed down his route, avoiding a motion penalty, then cut into the corner of the end zone.

"I just put it on him where it needed to be," Sheehan said. "Then everything just went crazy."

Sheehan finished the game 34-for-51 for 388 yards and two touchdowns.

"It was huge," Brandon said. "Just think about that. He completed a two-point pass to win the game in his first college start. That'd be great for your confidence, wouldn't it?"

After stumbling at Michigan State, the Falcons put up 48 points and 41 points in wins against Temple and Western Kentucky. Sheehan successfully has directed an offense anchored in short passes and ball distribution. Five receivers average 29-80 receiving yards per game, and five, not counting Sheehan, have caught touchdown passes.

Before trying to prove critics wrong in the MAC -- the Falcons were picked fifth in the East Division before the season -- Sheehan and his teammates take on Matt Ryan and Boston College.

"We've got a huge opportunity to make a national name for ourselves, like we used to have here," Sheehan said. "We're out here to prove a lot, not only for us, but for our league and all the underdogs."

Both Harris and Jacobs led Bowling Green to bowl victories and national rankings, but neither won a MAC championship, which has evaded the Falcons since 1992.

"Everybody talks about the next great Bowling Green quarterback," Brandon said. "There's a standard here that's been set with Josh and Omar. Tyler's stepped up big in his first four games and is on track to do some great things here. But the No. 1 thing that he's going to have to do is take the team to a championship.

"When he does that, then you can say he's a great player."

Sheehan continues to laugh off the comparisons, but he and Jacobs have one thing in common -- headgear. Because of his splendid start, Sheehan often wears a hat in public to maintain his anonymity.

"It doesn't always work," he admits. "Maybe the dreads will work for me."