The guys who build those mammoth casinos out in the Nevada desert have a certain image.

Designer suits, silk shirts and the elusive knowledge of an alluring-but-all-too-accurate betting line that will entice others to willingly part with millions. 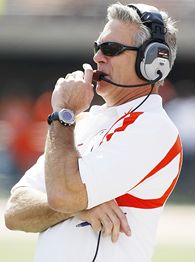 At least he sees something else this week upon learning his Illini are 2½-point favorites Saturday against visiting Wisconsin.

To Zook, the brilliance that's raised a gambling mecca atop sand and tumbleweeds is as transparent as freshly-scrubbed window pane.

"That favorite stuff," Zook sniffed. "That's got to be a Wisconsin guy trying to get them upset. I don't know how you can have a team [favored] that's been 2-10 the last two years playing the No. 5 team in the nation."

Forget the 4-1 start overall, which is as many wins as Illinois managed his first two seasons.

Forget the 2-0 start in Big Ten play, which is double the Illini's conference win total in 2005 and 2006 combined.

And forget the 27-20 upset last week of No. 21 Penn State, which ended Illinois' 17-game losing streak against ranked opponents.

The truest measure of the Illini's rebirth is that those whose wealth depends on never being wrong about these things favor the target of FireRonZook.com over a team ranked fifth in the country and boasting the nation's longest winning streak.

All this leaves the over-caffeinated Zook so conflicted he might need therapy.

In the midst of stifling the slightest hint of satisfaction, he can't help acknowledging the unmistakable advancement of his program in just over two years.

Just how much became evident Saturday after a third interception sealed Illinois' first win over a ranked opponent at home since 1991.

While his players exulted, Zook scanned a sold-out Memorial Stadium that just two years ago had 16,000 empty seats when Penn State came to town and applied a 63-10 beating.

Senior linebacker J Leman was a sophomore then, playing for a head coach who didn't recruit him, but in whom he believed amid a tomb-like locker room afterward.