"It's not your size; it's the size of your heart."

It might be one of the oldest clichés in sports, and most of the time when you hear or read it, you put your attention span on automatic pilot and fly right by it. 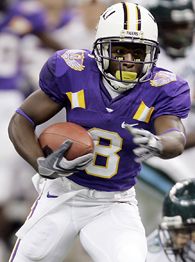 But when a guy who's 5 feet, 5 inches tall and weighs 160 pounds, is a major offensive contributor on college football's No. 1 team and is one of the fastest track sprinters in the world says it, you don't dismiss it.

You realize when LSU sophomore running back/return specialist Trindon Holliday says, "It's not your size, but the size of your heart," it is his mantra. It is what drives him to prove every one of those college recruiters who thought he was too small wrong.

Like the recruiter from Duke who sent him a rejection letter wishing him the best, basically telling him he didn't have the physical attributes to play college football.

Or Rickey Bustle, the coach at Louisiana-Lafayette, who pulled a scholarship offer off the table when he realized Holliday was a tiny dancer.

Or even LSU coach Les Miles, who had second thoughts about honoring a scholarship offer made by previous coach Nick Saban, until holdover offensive coordinator Jimbo Fisher convinced Miles that Holliday was the truth.

Hey, all those recruiters shouldn't feel bad. They need to take a number behind Holliday's mother, his high school coach and every defense that has ever faced him.

They all initially doubted him. They all thought he was too small, not just to get the job done effectively, but to even play.
"My momma wouldn't let me go out for football until the seventh grade," Holliday said. "When I was smaller, she wouldn't let me play. She was afraid I'd get hurt."