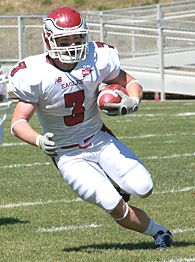 Woodhead got the 121 yards he needed by the third quarter to
surpass the previous record of 7,353 yards held by R.J. Bowers.

Woodhead, who eclipsed the record on a 6-yard run, finished with
208 yards on 34 carries, giving him a total of 7,441 career yards.

He also scored two touchdowns in the Eagles' 21-0 victory over
the Mustangs in a Rocky Mountain Athletic Conference game.

Bowers, who set the record from 1997-2000 at Division III Grove
City (Pa.) College, and Woodhead are the only players to top 7,000
yards rushing in college football.

Woodhead, who won the 2006 Harlon Hill Trophy as the outstanding
player in Division II, had averaged 27 carries and 190 yards over
38 career games.

Woodhead had no Division I offers when he was coming out of
North Platte (Neb.) High. He was 5-foot-8 and 175 pounds at the
time, and judged to be too small.