It took three overtimes, but No. 1 LSU finally fell to No. 17 Kentucky. What did we learn from the game? ESPN.com's Chris Low gives us his instant analysis:

• LSU lost. Why should we be surprised? What a wacky year in college football, and it just got a little crazier tonight with Kentucky knocking off No. 1-ranked LSU 43-37 in three overtimes. The door is wide-open now for Cal to move into the No. 1 spot in the polls, and more importantly, the top spot in the first BCS standings when they come out on Sunday. The Bears are tied right now 7-7 with Oregon State. 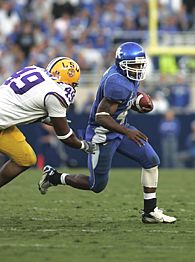 • To beat the No. 1-ranked team in the country, you need special performances from unsung players. Kentucky got a clutch all-around game from freshman running back Derrick Locke, who was filling in for the injured Rafael Little. Locke, who was initially recruited as a sprinter on Kentucky's track team, showed his toughness and vision with some hard-nosed inside runs to keep the LSU defense honest. But it was his pick-up of blitzing LSU defensive end Tyson Jackson that gave Andre' Woodson just enough time to throw the game-winning touchdown to Steve Johnson in the third overtime.

• The wildest race in all of college football this season just might be in the SEC's Eastern Division. How do you pick a favorite at this point with Kentucky upsetting No. 1-ranked LSU tonight? Florida travels to Lexington next weekend in what should be another classic. The Gators, as talented as they are, can't afford a third SEC loss and expect to stay in the race. South Carolina and Tennessee each have just one SEC loss, and they square off in two weeks in Knoxville. There's also the Florida-South Carolina matchup on Nov. 10 in Columbia, and Kentucky and Tennessee meet in the Nov. 24 finale in Lexington. So stay tuned. It's almost a given that the East winner will have two losses this season with it coming down to the tiebreaker.

• With top 10 teams falling at a dizzying rate this season -- the latest being No. 1-ranked LSU tonight to Kentucky in three overtimes -- the door to the BCS National Championship Game is as wide open as ever. Of the unbeaten teams, Cal and Ohio State are in the best shape at this point. The second tier among the unbeatens would be Boston College and South Florida. I do believe that South Florida has the best chance among those teams to stay unbeaten, but it remains to be seen how much love the Bulls will get from the computers and the pollsters at season's end. Of the one-loss teams, I like Oklahoma. The Sooners' schedule sure sets up nicely if they can hang on tonight against Missouri. Even though Southern Cal isn't playing real well right now, it's hard to count out the Trojans. And, again, the sleeper in the Pac-10 is Oregon. It will be interesting to see how far LSU falls. The Tigers, who are as talented as any team in the country, would probably need some help at this point to claw back into the national championship race. But if they win out -- and gain some pop with a second win over Florida in the SEC championship game -- who knows? However it shakes out, it should be fun.