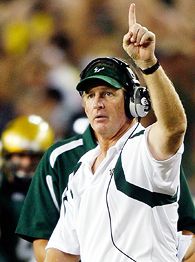 At least not for public displays of it during a game week.

Consider his response when a reporter asked whether, in a quiet moment, Leavitt ever finds himself amazed at the stunning rise of his program, which grew from dirt 11 years ago and is ranked No. 2 in the BCS standings with a legitimate shot at a national championship.

Rutgers was college football's feel-good story for much of last season. South Florida has assumed the title by virtue of its meteoric climb.

"I know you all get bored with this, but it's the truth: I don't really think about it a whole lot," Leavitt said. "I spend so much time, you know, trying to make sure I stay awake looking at all this film."

That is a fairly typical Leavitt response, which is why it was so interesting to hear his answer to another question during Monday's conference call with reporters.

Somebody asked Leavitt about Hayden Fry, who gave Leavitt one of his first big breaks when he made him a graduate assistant coach at Iowa in 1989. A year later, Fry recommended Leavitt for an assistant coaching job at Kansas State.

"When you mentioned his name, I smiled," Leavitt said. "I guess I don't smile all the time. I really appreciated his personality. I appreciated his attention to detail. I mean, he loved his players so much. Demanded a lot of out of his coaches, I can assure you.

"Coach Fry, he's a piece of work. I really appreciated him a lot and do to this day."

The feeling is mutual.

Fry, 78, is retired and living a leisurely life in the resort town of Mesquite, Nev., about an hour's drive north of Las Vegas. The place is dotted with seven golf courses and five casinos, and it sounds as though Fry has sampled each one.

He has three big-screen televisions in his home theater ("I've got a bar in there, too," Fry said), all of which will be tuned to the South Florida-Rutgers game Thursday.

"I'll be hollerin' Thursday night," Fry said Monday in a phone interview. "I bleed and sweat for South Florida."

Fry spotted a future head coach in Leavitt practically the minute they met. Leavitt, a native of St. Petersburg, Fla., had coached at various smaller Iowa schools, in addition to a graduate assistant post at Missouri. To say he was a type A personality wouldn't be quite accurate.

Consider a story from when Leavitt was the defensive coordinator at Morningside College in Sioux City, Iowa. It appears in the South Florida media guide this way:

Leavitt drove from Iowa to St. Petersburg, Fla. to meet a recruit at Lakewood High School for a 9 p.m. meeting. Leavitt pulled a projector out of the trunk of his car, groped in the dark to find a power outlet outside the gym, threw a beach towel over a chair and proceeded to show the recruit Morningside game films. In the two weeks surrounding that one visit, Leavitt put 2,500 miles on his Chrysler LeBaron.

"He's what I would call a wild man," Fry said, laughing. "I think he still runs wind sprints with his players, and he's 50 years old! He's great. He's doing a wonderful job there -- and I remember even as a grad assistant back then, he had great contacts in Florida."

When you consider Leavitt's primary coaching influences, it's really no surprise that he has built South Florida from a pile of gravel into a rock-solid program in 11 years. His main models were Fry and former Kansas State coach Bill Snyder, both of whom executed rebuilding jobs for the ages.

Fry rescued a North Texas State football program that was on the verge of disbandment in 1973 and revamped an Iowa program that had gone 17 consecutive seasons without a winning record. 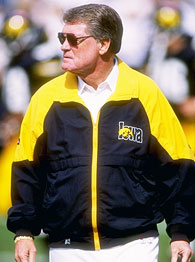 Kansas State was a laughingstock when Snyder arrived in 1989. It had gone 27 games without a victory. Snyder, who'd been Fry's offensive coordinator at Iowa and worked with him at North Texas, installed a creative offense and applied his obsessive work ethic. Kansas State soon became a consistent winner, going to 11 consecutive bowl games.

Like Fry, Snyder will be watching intently Thursday night. Both stay in touch with Leavitt. Snyder had an incredible staff at Kansas State, one so talented that Leavitt and current Oklahoma coach Bob Stoops shared the defensive coordinator post from 1992 to '95.

"That was a period of time where we had Bobby Stoops and Jim and Mike Stoops [now head coach at Arizona]," Snyder, 68, said in a phone interview Monday. "They were all kind of the same vintage and came along together. Bobby and Jim were almost like twins and were so very, very good at what they did. They were tremendously competitive, but not as it related to jealousies over the job.

"They just wanted to win."

Even at Leavitt's first job, as defensive coordinator at Division III Dubuque (Iowa) in 1980, he participated in a radical turnabout. Dubuque snapped its pesky streak of 40 consecutive losing seasons that year and went 8-2-1 to qualify for the playoffs.

Those turnarounds weren't miracles, of course. They were borne of the perspiration of coaches and players following the vision of men such as Fry, Snyder and Leavitt.

"Jim is maybe considered to be a little old-school, but he's old-school with foresight and insight into the future," Snyder said. "He does everything by a fierce example, in such a way that people around him are destined, so to speak, to follow the example. My guess is he's got his hand on virtually everything that takes place there and does it in such a way where he's not stepping on the others' toes. He built that thing from the ground up, and when I say that, I mean, his first office was a trailer."

Burnham was the linebackers coach for Florida State's national championship team in 1993 and later the defensive coordinator at South Carolina. When he arrived at USF in 2000, the Bulls' coaching staff still was working out of trailers, which begged a question:

How does one sell recruits on such a place?

Today, the coaches work out of real offices and the players perform in front of crowds of 65,000-plus at Raymond James Stadium.

The games just keep getting bigger. Rutgers won at South Florida last season, 22-20, and will present a major challenge.

"They're going to get our best shot," says Rutgers defensive tackle Eric Foster. "I can guarantee you that."

Leavitt will make sure his team is fully prepared, too. He has been arriving early at his office this week, as usual, rallying his staff and players.

Is he all fired up at the crack of dawn, too?