SOUTH BEND, Ind. -- Evan Sharpley will start at quarterback
for Notre Dame against No. 13 Southern California, making the
junior the third starting signal-caller for the Fighting Irish this
season.

Coach Charlie Weis said he decided to let Sharpley make his
first career start for the Irish (1-6) because the junior has been
steadily improving. Also, freshman Jimmy Clausen, who has been
starting, is banged up. He's been sacked 23 times.

"I think Evan this week gives us the best chance of winning,"
Weis said Tuesday.

Asked whether the move was permanent, Weis said: "It's a
permanent switch for the USC game."

Sharpley got the majority of work in practice for the first time
Tuesday.

"It was a different experience," Sharpley said. "Once I'm in
that situation I tried to make the best of it and played as hard as
I could." 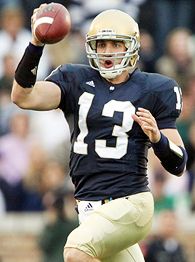 Sharpley has been the No. 2 quarterback for all seven games this
season. Demetrius Jones started the season opener and transferred
to Cincinnati after losing the job. Clausen, the first Notre Dame
quarterback in at least 56 years to start his second game as a
freshman, started the next six.

Sharpley has led the Fighting Irish to four of its seven
offensive touchdowns, despite playing significantly less time than
Clausen.

He said he was excited to receive the news Monday, but tried to
maintain an even keel.

"We're focused on USC and focused on winning, so we need to get
back on track," he said.

Sharpley, who has passed for three touchdowns and two
interceptions in six games, has a 111.42 pass efficiency rating
compared with Clausen's 89.51. Clausen has one touchdown pass and
five interceptions.

Three of the four touchdown drives Sharpley has led have been 79
yards or longer. The other was 37 yards long. Clausen has led the
Irish on TD drives of 9, 80 and 2 yards.

Weis had said Clausen had been the starter because he's been
more accurate, completing 81-of-141 for a 57.4 completion rate,
compared with Sharpley's 43-of-80 passing for a 53.8 completion
rate. But Clausen had his worst outing last week, going 7-of-20 for
60 yards against Boston College with two interceptions.

Sharpley, who was backup to Brady Quinn last season, replaced
Clausen early in the second half against Boston College and was
11-for-29 for 135 yards and a touchdown. Another TD pass was called
back because of a holding penalty. Sharpley also rallied the Irish
in the second half of a loss to Purdue.

Weis said Clausen took the news well. Watching from the sideline
could help Clausen, he said.

"The game slows down for you when you're not in," Weis said.
"The game happens really fast when you're in there."

Weis also announced that James Aldridge, leading the Irish with
249 yards rushing on 67 carries, is doubtful for the game with a
high ankle sprain. That's bad news for an Irish squad that already
is last in the nation in rushing at 32.1 yards a game.

Travis Thomas, who has rushed for 20 yards on 18 carries,
Armando Allen, who has 126 yards on 35 carries and Robert Hughes,
who has 39 yards on 12 carries, will all see increased playing
time.