It's the kind of matchup that would traditionally have the networks salivating and fans excited across the country.

But those across the country who want to follow Saturday's Texas A&M-Nebraska game will have to pull out their satellite radios or telephones for game reports. 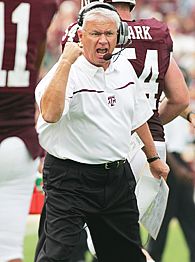 Recent struggles for both teams have led some pundits to call this "The Buyout Bowl" because it likely will determine the futures of A&M coach Dennis Franchione and Nebraska coach Bill Callahan.

The ax already fell at Nebraska this week when athletic director Steve Pederson was fired with five years left on his contract in the wake of a humiliating 45-14 home loss to Oklahoma State last week. It was Nebraska's worst home loss since 1958.

Former Nebraska coach Tom Osborne was hired as interim athletic director for the next several months to right the program. Hopes are that he can steer it back to the prominence it had when he was leading the Huskers to three national championships as head football coach in the 1990s.

Callahan could be next on the chopping block, even after receiving a two-year contract extension from Pederson earlier this season. The current Nebraska coach clearly has lost support from many Nebraska fans in the past month.

Nebraska (4-3, 1-2 Big 12) has yielded 40 points in four of its past five games. The Cornhuskers had never allowed 40 points four times in any previous season in the 118-season history of the program.

Texas A&M (5-2, 2-1 Big 12) isn't in much better shape. Franchione is reeling from the reverberations of his team's 35-7 loss at Texas Tech last week. That came in the first game since the school released the findings of an internal investigation regarding the legality of his VIP Internet newsletter that was sold to a group of select boosters for $1,200 per year.

The school uncovered two secondary NCAA rules violations in the newsletter fiasco, which projects a devastating scenario for Franchione. A&M athletic director Bill Byrne admonished Franchione for the "embarrassment" and "genuine distraction" created by the newsletter.

Both coaches said they weren't concerned about their job status after their most recent losses or the controversy swirling around their respective programs.

"I just feel terrible for these players," Callahan said. "It just hurts to watch these kids hurt.

"I'm not worried about my job. I'm just going to do the best I can, and whatever happens, happens. I don't think you can coach in fear or coach like you're scared or something. I've never coached like that in my life."

Later that evening, Franchione was answering similar questions after a loss that dropped his career Big 12 Conference record below .500.

"That is of no concern to me," Franchione said of his job prospects. "I only care about the players and the coaches."

Nebraska's home loss against the Cowboys last week ranks as one of the lowest points in the school's modern football history. The school attracted a sellout crowd for the 287th consecutive game. A lot less were around for the finish of a homecoming game that was meant to honor Osborne and his 1997 national championship team.

Osborne spoke with Nebraska players before the game, and 1997 team members greeted current members on the sidelines when they emerged from the dressing room shortly before kickoff.

The Cornhuskers responded to that jolt of inspiration by allowing OSU to jump to a 17-0 lead before producing their initial first down.

OSU scored on its first six possessions as it cruised to an early 38-0 advantage. By then, many Cornhuskers fans had already headed for the exits. 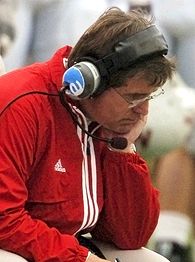 It was the largest home rout for the Cornhuskers since losing to Missouri 31-0 in 1958.

"It was almost like seeing your little brother get beat up," former Cornhusker Aaron Taylor told the Omaha World-Herald after the game.

By the end of the game, several Nebraska fans still in the stadium were wearing paper bags over their heads, and Callahan was serenaded with catcalls and expletives as he left the field.

That humiliating loss led Nebraska coaches to make a symbolic, but entirely fitting, gesture of stripping the defensive unit of its revered black practice jerseys earlier this week. Nebraska starters and other key defensive personnel have collectively been known as "The Blackshirts" since Bob Devaney started outfitting his defense in those colors in 1962 to make them easier to identify.

"It's a decision we all made," embattled Nebraska defensive coordinator Kevin Cosgrove told reporters earlier in the week. "We're going to make them earn those things back. That's all I have to say."

The Cornhuskers rank among the nation's most woeful defensive units -- 104th overall in total defense, allowing 457 yards per game. They have allowed opponents to gash them for 610, 606 and 551 total yards during the recent four-game slide.

Franchione's record is even worse since he came to A&M from Alabama in 2003 to replace R.C. Slocum. Franchione is 30-25 overall and 17-18 in conference play and has seen his team embarrassed in a disturbing set of losses over the years, including a a 59-28 loss to Tech in 2003 and a 77-0 loss to Oklahoma later that season.

After starting 3-0 this season, the Aggies looked ill-prepared in a 34-17 loss to Miami in a nationally televised game in which they fell behind 31-0 after three quarters.

The Aggies dropped their second game of the season last week at Tech, failing to score in their final 10 possessions.

A&M still holds a share of first place in the Big 12 South and needs only one victory to become bowl-eligible.

But a meat-grinder schedule approaches, with road games against Oklahoma and Missouri along with home games against North leader Kansas and Texas. It's hard to imagine the Aggies could win more than a couple of games during the rest of the season.

Nebraska faces a similarly tough finish. It will be interesting to see how the Cornhuskers approach the game after the tumultuous week around the team.

Franchione said he expects his team to play similarly in Saturday's game.

Which makes the "Buyout Bowl" so intriguing.

Mainly, because somebody has got to win it.