In his latest book, "It Never Rains in Tiger Stadium," John Ed Bradley chronicles his rediscovery of the LSU team that he had long forsaken but never forgotten.

I hated Mondays. I hated the monotony of stretching and warmups, the drudgery of running the ropes and driving the eight- and single-man sleds, the frustration of facing scout-squad guys who were so eager to impress the coaches that they were doing bull rushes and swim moves even before I could get the ball to the quarterback and come up out of my stance. "It's Monday," you could tell them. "We're supposed to be half speed." And the next play they were doing it again. I hated how sometimes when I snapped the ball, it banged against my nuts and I felt an immediate urge to puke even though there was someone to block and no time to puke. 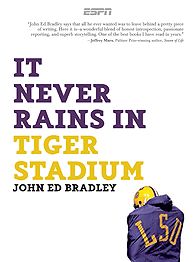 I hated how the thigh pads sucked and pulled at your hair and pinched your skin. I hated the restrictive hip girdle, with pads for the right and left flanks and a third pad that fitted over the crack of your ass and protected your tailbone. Truth is, my ass didn't need protecting; it was so corked with muscle that a master sushi chef couldn't have carved his initials in either buttock with a Ginsu knife.

On Mondays we ran conditioning drills after practice -- another
reason to hate the day. We drilled for ninety minutes, then lined up on the goal line and ran sprints in position groups. Most Mondays, we ran ten consecutive fifty-yard dashes with barely a break. Other Mondays we ran progressions. We began with a ten-yard sprint, then added ten yards to each successive sprint until we finished by running a hundred yards in the tall, soft grass. My sophomore year, the coaches introduced us to gassers. We ran ten yards, touched a foot on the line, broke back hard to the goal line, touched a foot on that line, then raced as hard as we could to the twenty-yard-line. At this point, every man started to feel a sharp pain in his ribs, and his lungs burned, and maybe his hamstrings were starting to cramp, but the drill didn't end there. We planted a foot on the 20 and cut back again for the goal line, then kept advancing by a distance of ten yards until we reached the 50. As soon as we hit that mark, we sprinted all the way back to the goal line, where it had all started. That was a gasser.

I used to wonder, even as I ran them: What kind of evil, twisted mind invents such a thing?

When we were done, I ripped my helmet off and flung it to the ground. I fell to a knee under the goalpost, making sure to keep a distance from the other players to prevent them from stealing my air. I screamed if anyone touched me. At this moment I was in such physical distress, I couldn't bear the weight of another man's finger, let alone his whole hand. Always, I endured the period by telling myself that it would make me stronger come Saturday night -- my legs more resilient, my lungs more robust. I wondered if my opponent was running gassers. I wondered if he was sprinting back and forth in twenty pounds of equipment on days when the local TV weathermen were warning people that the best way to avoid death by heatstroke was to stay inside.

On Mondays, I even hated my knee pads. I could complain to the equipment manager that they were as big and soft as goose-down pillows and did nothing to protect me from tearing an ACL, but NCAA rules said you had to wear them, so I wore them. On Mondays I had nearly as much contempt for my shoes. I hated the black leather cleats dressed with white stripes and strings so long I had to lace them a couple of times around the meat of my foot before tying them off. I hated how blisters formed on the edges of each ankle wrap and hurt so bad that they made me want to find a hacksaw and chop the bottom half of my leg off. I hated how the cleats, screwed into the bottoms of the shoes, felt as if they were poking up through my soles, drilling holes into my flesh, and, in some spots, tapping bone.

Mondays were for masochists. On Monday there was always a fraternity boy driving his new convertible on River Road with the top down and music blaring -- Boz Scaggs, Barry White, the Bee Gees, ELO. On the milky-white leather seat next to him sat a sorority girl with golden hair flowing in the sun. Never a brunette or a redhead. How her little tube top didn't rip in two was one of life's great mysteries. When you spotted them from out on the Ponderosa, your misery meter started to chirp. They were out enjoying a romantic car ride while you were condemned to a life of suffering and sacrifice.

I hated Tuesdays every bit as much. On Tuesday we were tired and sore from Monday, and the uniform hurt when you put it on. On Tuesday you wished somebody would escort you out into the high weeds on the other side of the levee and shoot you dead and let the river wash you out to sea. We ended Tuesday with twenty minutes of team offense and another hard round of conditioning, the coaches having to scream louder now to get us to run.

"Will the damn thing never come?" I yelled one day, loud enough for everyone to hear.

"Saturday. I want it to be Saturday."

"Only trying to make you better."

He sat in the shade of his golf cart, watching from the middle of the field, so we had to run around him and waste more energy.

"Can't let the people down, buddy. Can  not  let  them  down "
Wednesdays were okay. On Wednesday the coaches let up a little. Thursdays we went out in shorts, shoulder pads, and helmets, and the lighter load made everyone feel better. Our legs felt new, and when the days began to cool, we felt downright frisky. On Thursday there was no conditioning, not a single gasser to run until next Monday, four days away, and this made me inestimably happy and pleased with the world. I reunited with my helmet, my pads, and my blisters. I forgave them for what they'd done to me, and they forgave me for hating them.

At the end of practice on Thursday, Mac called us around him and instructed us to take a knee. "They put their jockey shorts on the same way we do, fellas," he said. "One leg at a time, fellas. One leg at a time."

We nodded to show we were listening. Sweat ran down our faces, drained down our necks, and tickled our rib cages, settling in our ass cracks and our cleats. In the cold, steam rose from our bodies like smoke from a barbecue pit. When we were heavily favored, Mac's tone was cautionary: "Don't take them lightly. Don't let them slip up behind you and take what you've worked so hard for. Nothing sneaky, fellas."

We roared, lifted our helmets high, and punched holes in the sky. As soon as the noise stopped, Mac extracted a folded sheet of paper from his shorts and read the list of films playing at the local cinemas. This too was tradition. On Fridays we always went as a team to a movie. "Okay, who wants the Burt Reynolds?" His lips moved as he counted the show of hands. "And now, who wants the Clint Eastwood? And the Charles Bronson? Anybody want the Charles Bronson?"

James Bond movies were the most popular; they outscored even shark and bikini flicks. Movies with fast cars were big too. Only once did we watch the same movie two weeks in a row. That was Walking Tall, where a good man facing long odds beat his opponents senseless with a stick. This was how we saw ourselves -- as underdogs -- even when we were ranked in the Top 20 and beating hell out of teams week after week.

We did not attend romantic comedies or love stories, and we always avoided any movie that critics had touted as worthy of Oscar consideration. "This fellow says this is one of the greatest movies ever made," Mac said.

He held out the newspaper ad for everyone to see.

"Got anything better, Coach?"

We traveled to the movie in a pair of Continental Trailways buses. Team captains passed around shoeboxes filled with fudge made by an elderly Baton Rouge woman, a friend of the football program. According to legend, she had been supplying candy to the team since Coach Mac replaced Paul Dietzel as coach, and either tradition or superstition had kept her as part of the team's Friday routine ever since. "Everybody has a role to play," Mac reminded us. "The big and the small, those who get the attention and those who don't. What is your role?" He pointed to a player, selected at random. "What about yours? And yours? And yours? Will you be the difference come Saturday night? Or will it be you? Or you? Or you  ?"

We never doubted what the fudge lady's role was.

Fifty varsity players filed into the theater and plopped into seats in a roped-off section. Fellow moviegoers cheered when we entered the room, all dressed in slacks and identical white polo shirts with tiger emblems. At times they stood and applauded, whistled and shouted for victory. We never got tired of it. We never stopped believing that they were right to love us. When we were on the road, the movie crowds didn't boo us, but they did make their allegiances known, yelling out, "Roll Tide" and "Go Dawgs" and "Gator Bait." No one seemed to mind. It was Friday before the game, and the cracks of our teeth were black with fudge, and the show was about to start.

My senior year, we went to a movie about Adolph Hitler, hardly the kind of film we typically attended. Players voted to see it after one of our trainers, Dell Flair, campaigned for us to go. Dell was Broussard Hall's resident intellectual. I never knew if he was having a joke at our expense, but so many players fell asleep that patrons in the theater complained to the manager about the snoring. And then suddenly Mac's hand was on my shoulder, nudging me awake. I blinked to consciousness, and there he stood, his big moon face looming inches away. "Are you sure you're ready to show the world what you're made of, buddy?"

I loved Fridays. But I loved Saturdays even more.

"It Never Rains in Tiger Stadium" is published by ESPN Books. This excerpt is run with permission of the publisher.