CORAL GABLES, Fla. -- There they were, minding their own business and dutifully watching practice film when some upperclassmen began to urge Miami's four fab freshmen from Northwestern High to check out their new uniforms in the locker room downstairs.

"They're like, 'Your new jerseys, they've got your name on it and everything. Go see them,'" defensive tackle Marcus Forston remembered with a smile. 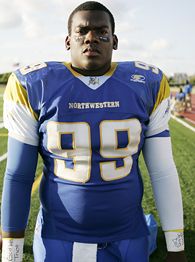 Unable to resist the trap, Forston and fellow freshmen Jacory Harris, Aldarius Johnson and Sean Spence all headed downstairs to find two of their bikes stuffed into bathroom stalls and toilet-papered and two more hung up and taped to giant pillars. (It required scissors and a little teamwork to get them down). Spence was observant enough to catch the "booby trap" rigged above Johnson's locker -- a cup of water -- before it spilled.

"We were laughing," Forston said. "Just part of being a freshman."

These players, though, chose to enroll at Miami early and get their initiations over with now.

Spring football practice began Feb. 26 at Miami, and eight of the Hurricanes' 32 incoming freshmen left their friends, families and high school classmates behind to be there. It's a trendy move urged by coaches -- and sometimes parents, too -- in order for the young players to get acclimated to campus, classes and, of course, Division I-A football.

Most of Miami's newest additions agreed a few early hits will pay off in August.

"By the time [the rest of the freshmen] get here, it's going to be 100 percent full go," said place-kicker Jake Wieclaw, who had to take his English 4 class online in order to finish early at Lincoln Way Central High School in New Lenox, Ill. "Spring ball is a little more laid-back, more learning. It's definitely going to be a huge advantage. We'll have a couple extra credits on our belt, a heads-up on what to expect, and on top of that I'm going to know a lot more people already."

The speed and intensity of practices caught most of the new players off guard -- as did Forston's alarm clock the first time it rang at 5 a.m. One look at a teammate doing a "rolly-polly," in which he's disciplined at the end of practice by lying down and rolling the length of the field (while stopping on occasion to throw up) easily set the tone. After about two days of practice in pads, Hurricanes coach Randy Shannon said, the stunned look on their faces disappears, and any fear is usually knocked out of them.