Editor's Note: Looming over Jeff Samardzija is the one question he can't answer: Football or baseball? With the Senior Bowl coming up on Jan. 27, and the NFL combine and April draft to follow, it'll soon be decision time for the fiery Notre Dame receiver/pitcher, whose mid-90s fastball prompted the Cubs to make him their fifth-round pick in last summer's baseball draft. They signed him to a back loaded $7.25 million deal and sent him to the minors, where he went 1-2 in seven starts with a 2.70 ERA for Boise and Peoria. The Valparaiso, Ind., native chose to return for his senior year, in part because he said his late mother, Deborah, would have wanted him to fulfill his commitment to coach Charlie Weis, and he rewrote the school record book for career catches, receiving TDs and receiving yards. In baseball, the 6-foot-5 righty is projected as a No. 1 starter, and if he commits to the Cubs, they'd likely respond with an even more lucrative major league contract. Conversely, if he commits to football, first-round NFL riches await. Will it be bus rides, bump-and-runs, or both? Samardzija still doesn't know what he'll do. But he sat down for an exclusive interview last week in Chicago to discuss what's on his mind and in his heart. 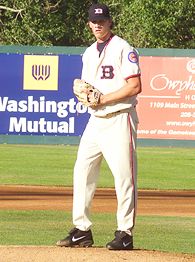 If I have to pick one sport, it will come down to which one I'm going to miss more. There's nothing I can do that's going to make me not want to play both. Say I'm playing football and I have one catch and I go over the middle and get my helmet taken off. Then say I see on TV some dude I know pitching in the bigs. And I'm like, "I just got
killed today and I'm way better than that dude." That's going to happen. Or I could be playing baseball and watch somebody catch eight passes for 120 yards and I just got shelled for six runs and I'm saying, "That dude sucks, I could do that." That's going to happen regardless.

Now how do I deal with that? I don't know. I'm banking on trusting myself to know that when I make a decision I stick with it, and that I did it for the right reasons. The last thing I want to do is be like, "Well if it doesn't work out, I can now go do the other sport." If I choose one I'm going to do it for the rest of my life. There's no way I want to be 28 years old and trying to go play baseball again or try and lace up the cleats again. Because then the whole time you're just setting yourself up for a loss.

What I like about football is when you make a play and coaches are throwing stuff on the sidelines and hitting you. That excitement that comes with football is something you won't find anywhere else.

When I'm pitching I take the same mentality out there that I take on the football field. Instead of spiking the ball or dropping a few f-bombs like in football, I get fired up when I'm on the mound, more so than a lot of other guys. Especially when I get back into the dugout, then it's fair game with anything in your way.

What I hate about football is watching the pros and seeing how quick they get the hook. The injury thing in football I don't like, because I don't care who you are, if you can't play for the team, you don't exist. They might come up and ask how you're doing and stuff, but when it comes down to it, who's coming up next?

The biggest thing I hate about baseball is going out there and giving up runs. I hate not doing well, that's probably what most scares me. You put together a string of 10 terrible starts and the next thing you know you're out of a job.

One time things were going real bad on both sides (maybe I had a bad football game and I didn't know where things stood with the Cubs), and I was like, "You know what? --- I was cussing up a storm -­ I'm just going to do both. I don't care about the money. I don't care if I get drafted in the sixth round of football, whatever. I'm just sick of everyone. I'm just going to do both." And for a while that's what I was going to do. I was happy because that meant I didn't have to make a decision.

I have probably invested an average of six hours a day just thinking of what I want to do, going back and forth in my head. I remember I'd sit in class for an hour and 15 minutes and the whole time looking at my paper and writing down where I might be. It just wears on you after awhile. So there could be a huge relief in just picking one. And maybe that will happen.

When I look at success in either sport, I put a lot of it on my shoulders. It kinds of depends on myself. I'm kind of a "why not?" guy. Ever since I was a kid I'd always say, why not? But the older I got, I coped with the idea of just playing one because I realized I could make one decision and be fine with it. It sucks. I'm getting greedy here, it
sucks big time. But there's a whole lot worse. As long as I can do it with a smile on my face then so be it.

The money doesn't really matter. I'm going to be 22 in a few weeks. I really don't care. And the only reason I do care is because people like my dad and my brother who are older and a little more experienced tell me I should care. And they're right, I should care, I'm not that dumb. If I go do whatever I want to do, the money's going to be there.
The Cubs have been amazing in being open when it comes to football. If in the next two days, or in the next two months, my agent Mark Rodgers calls me up and says, "Hey, the Cubs just came with something I think you should listen to them," then so be it. Then we'll talk about it. 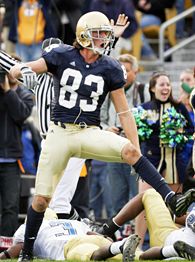 This summer I wanted to get to Boise to start pitching, even though I wasn't signed yet. I had just flown in from my friend Tommy Zbikowski's boxing fight in New York, and I threw that day at Wrigley. A couple of my buddies came up from Valpo and after the Cubs game, we went out. I had planned on driving out the next day with my
brother, but I told him I was going to do it myself because I wanted to go off on my own a little bit and get away from everything. Got some sleep and woke up at about 10 or 10:30 and said bye to my buddies and I hit the road. For 26 hours I just drove, drank Red Bulls, Full Throttles, coffees, cokes and stopped for gas -- that's when gas was
like $2.80, so I was getting killed. I turned the cell phone off; a lot of people were worried. I took a little two-hour nap somewhere in the beginning of Wyoming because the sun was going down and I wanted to drive through the mountains when it was light out, because I had already driven through the great plains for about 12 hours and had
seen more of Nebraska then I ever want to. I finally got to Boise at about 2:30 in the afternoon or so. It was just a crazy trip. I didn't sign until three days after I got there. I just wanted to get out there and do something. Time was short for me. I had to be back July 31 for football, so I had a short window and had to get in as much as I could.

Tommy's a good buddy. He's been through a lot too. It was definitely good to have someone who felt what I was feeling and could talk to about it. Tommy's a little bit biased when you ask for advice because he's a huge Cubs fan. You've got to watch your questions with Tommy because before you know it you'll be wearing red and blue. He's a huge Cubs and Bears fan so unless I went to the Bears, I know what his answer is. But it's always in a joking way.

I think about my mom all the time. I think ultimately she'd just want me to go out and do whatever made me happy. What's easy for me is that I know she'd be cheering either way. I think she'd probably just want me to be home a lot so she'd probably want me to go to the Cubs, unless I got drafted by the Bears. I think my dad wants me to play football, and my brother is more like me, he wants me to prove everyone wrong and play both. But in the end they both want me to be happy and will support me in whatever I choose.

People always ask me if I'm sad to leave Notre Dame. I am. I had a lot of good times there, but I also did what I had to do while I was there. It's sad not to play another football game there because it's such an amazing atmosphere on game day, but I think you've got to be ready to move on. You can't leave your heart and soul in one place. You've got to take it with you.