Last year, it was TCU. Before that, it was BYU...and Fresno State...and Marshall...and Tulane.

Each season, we love to label a team as Cinderella and hope it can win enough to disturb the natural order of things in the Bowl Championship Series. So far, many have challenged, but none has succeeded. 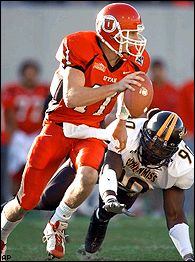 The pending addition of a fifth BCS game will improve access for teams like these -- but not until 2006. Until then, any team outside of the six major conferences must still finish in the Top 12 of the BCS standings to be eligible for selection or in the Top 6 to be guaranteed a spot.

Over these next two years, however, a Top-6 spot might be more difficult to attain than ever before. Because the BCS formula has been changed to give the polls two-thirds weight, any team hoping to reach the upper echelon of the BCS Standings must impress the voters to get there. And in the six-year BCS era, no team outside of the major conferences other than Notre Dame has climbed higher than No. 7 in the polls.

So, who has a realistic chance to break through the barrier this year? Start with Utah. The Utes have the advantages of starting the season ranked in the Top 20 and at least two primetime appearances on national television. In addition, an undefeated season might hold more credibility with voters because of three non-conference opponents from BCS leagues (Texas A&M, Arizona and North Carolina).

Voters are also familiar with TCU because of long winning streaks in 2000 and 2003, but the team from Conference USA with the schedule most conducive to going undefeated might be Memphis. Having already beaten Ole Miss, the Tigers' best remaining opponents seem to be Louisville and Southern Miss, and both must come to Memphis. The schedule rotation also allows them to miss TCU.

Fresno State also has to be in the mix after going on the road and beating Washington, which isn't usually an easy task. If they can go into Manhattan and beat No. 12 Kansas State this weekend, voters in both polls will undoubtedly begin to take them seriously. The same may also hold true for Boise State if it can beat Oregon State on Friday night. The potential exists for Fresno to play a game with significant BCS implications at Boise on Oct. 23.

But with or without a signature win, any team from the non-BCS conferences must go undefeated to have a realistic shot at a BCS berth in the next two years.

Brad Edwards is a college football researcher at ESPN. His Road to the BCS appears weekly during the season.