LITTLE ROCK, Ark. -- Hide the children, or cover their ears, because Robert Dacus is fumbling through his black Yukon for the CD that says "GAME DAY," and it's time to get psyched. Forget decorum. A block up the road, seemingly normal people are raising their hands to the sky, fluttering their fingers, and chanting, "Woooooooooo Pig! Sooie!" Forget the fact that Dacus is a middle-aged optometrist with a balding head and two grown boys.

His younger boy, Weston, is about to play football, and these proud moments are fleeting. Robert presses on the volume button and bobs his head as Kid Rock thumps through four open doors.

The fog has lifted, the earth has shifted and raised the gifted

"Turn it down," Dacus' wife Nancy says between eye rolls. "There are children around."

The thing about Razorback football is that nobody, really, is playing for himself. It's way bigger than that. There are 53,187 square miles in the state of Arkansas, 600,000 acres of lakes and one common interest. Each fall, the 110 boys on the Razorback roster are worshipped, analyzed and scrutinized.

Twice a year, Arkansas leaves Fayetteville to play three hours away in Little Rock, the state capital, to take the team to the people.

If Weston Dacus stopped to ponder the magnitude of it all, he probably wouldn't flinch. He's 235 pounds of linebacking rock, a captain who'd kick his buddies out of the house at 10 o'clock on Friday nights in high school so he could get some sleep. He never was the worrier in the family.

He has roughly 2.8 million people doing that for him.

Three white busses roll down Interstate 540, past winding cliffs and Wal-Mart trucks and a sign that leads to Toad Suck Park. Weston Dacus closes his eyes and listens to his country CDs. He has an iPod but rarely uses it -- the downloads are too much of a hassle. No Garth Brooks, no Rascal Flatts because that's just a little too pretty for him.

At roughly 2 o'clock, the team arrives at Easter Seals Hospital, their first stop in Little Rock. As they walk in, a player is overheard saying, "This just kills me to see these kids like this."

They sign autographs for half an hour, then glance over at Ginny Heiple as she thanks them on the way to the busses. Heiple, a teacher at the Childrens Rehab Center, is wearing an old cheerleading outfit from her college days in 1969. The cardinal-colored dress still fits perfectly.

One half-hour trip, Heiple says, goes a long way. It pulls the kids in front of the TV on Saturdays, and makes them keep stats on their favorite players.

"This," Heiple says, "is like the highlight of their year."

Father and son talk or text nearly every day, but by late afternoon on Fridays, Robert Dacus knows not to bother. Weston sleeps on Fridays. On home weekends, coach Houston Nutt whisks his team off to a hotel in Bentonville, which is about 30 minutes away. There, they are free of distractions and noisy roommates and swooning co-eds. 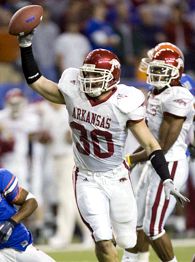 Nutt is big on focus. At the pregame meal on Saturdays, he makes his players turn in their cell phones. They are placed in plastic baggies with the players' names scribbled on the sides and returned after the game.

On Friday nights, the team rarely deviates from its routine -- nap, dinner, team movie, film, and more sleep. On this night, they see "The Bourne Ultimatum." Saturday's game against Tennessee-Chattanooga is at night, and Dacus hates spending the day lying around the hotel and waiting.

He's never been good at waiting. When his big brother Joe lifted weights and trained for football, little Weston had to do the same. When he fixed himself protein shakes to bulk up, Weston grabbed a glass.

"Me and you, one-on-one," little Weston would say when he knocked on doors in Searcy, Ark., with a football. It didn't matter that some of the boys were four years older and six inches taller.

Now Dacus is the one everybody in Searcy looks up to. On Saturday mornings, they pile into cars and honk to complete strangers along Interstate 40. At one point, the town had 160 jerseys with Dacus' No. 30. They flew off the racks.

Dacus is pure hog. Nearly all of his high school graduation presents had some kind of Razorback theme, right down to the monogrammed hog towels. Sitting near the lobby at the Embassy Suites, he almost seems puzzled -- or offended -- when an outsider asks if he's ever been embarrassed doing the Woooooooooo Pig! Sooie! chant.

"I think it irritates a lot of people," Dacus says. "[But] it's not strange.

"There's a country song, and I wouldn't be able to tell you who sang it, but I think part of the song is talking about all the other SEC schools and [then] they say, 'Woo, Pig Sooie sure gets to me. Go Hogs, go.'"

It is just before kickoff, and Robert Dacus is puffing up like a bandy rooster, tailgating and telling stories about the times his boy laid on the floor after football games, late into the night, and watched hours of tape just to see what he did wrong. 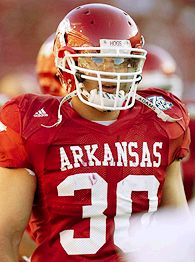 A plane flying overhead breaks his train of thought. It's dragging a long banner that says, "There's Nuttin' like being 0-2 in the SEC!"

Nutt, Robert says, is part of the family. He came to Searcy once for dinner, when Weston was in high school, and grandma was a pistol that night. She asked the coach why her grandbaby, a star fullback, the second-best in the state, had to move to linebacker at Arkansas. If he played defense, grandma said, she'd never hear his name on the radio.

"Miss Dacus," Nutt said, "I promise you. You'll hear your grandson's name on the radio."

And everywhere in Searcy. Everybody, 80-year-old grandmothers, 40-year-old accountants, want to talk football when they ease into a chair at Dacus' optometry office. OK, maybe it's because Robert brings it up sometimes.

"That's my boy!" is what he says every time Weston has a big hit or a sack.

"Football," Nancy says, "is the one thing that brings the whole state together."

Robert frowns as he stares up at the plane, which is lingering high above the stadium.

"Except for the few thousand that are flying around in dumb airplanes making an idiot out of themselves."

All of the rest, the driving, and the buildup, and War Memorial Stadium is quiet and part empty by the fourth quarter. The Razorbacks aren't exactly dominating Tennessee-Chattanooga, a former Division I-AA team whose claims to fame are Terrell Owens -- who didn't show up for his Hall of Fame induction -- and "Saved By the Bell's" Mr. Belding. 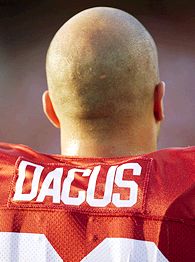 Boos rain down at one point in the first half, when the Mocs are still fighting and in it. In the fourth row, on the 50-yard-line, Romy Morgan's stomach churns. She's Weston's mom, and she's followed him from Florida to USC, just like Robert. They just take different routes. The couple split up when Weston was young, but football brings them together on Saturdays, in the same row, holding their breath through hits and fourth-quarter rallies.

At Alabama a few weeks ago, Romy's head hurt so much she needed two ibuprofen, and the headache still didn't go away. She doesn't seem to enjoy Saturdays as much as Robert. She worries about her son getting hurt. She wonders about his dream of playing in the NFL, where the men taking the hits are much bigger.

But she knows Weston is tough. When he was 9 months old, he fell off the side of a truck, 4 feet, and landed on his face. All he wound up with was a little scratch on his lip.

"Nothing could hurt him," Morgan says. "He was just totally resilient."

The clock runs down, and Weston stays in until the end. The Razorbacks win, and he isn't hurt. For Dacus' family, the ending is perfect. He lingers in the locker room the longest, while two sets of parents wait by the white busses until he emerges. He hugs all four of them, then the driver honks and Robert says goodbye.

Robert is still wearing his No. 30 jersey, but everybody knows. That's his boy.

Elizabeth Merrill is a senior writer for ESPN.com. She can be reached at merrill2323@hotmail.com.