STARKVILLE, Miss. -- If you close your eyes and listen carefully, you can hear a little bit of Jack Cristil all across the Magnolia State each fall.

The voice of Mississippi State football has been a constant for better than half a century, so it's no surprise that there are imitators across the radio dial, calling high school football games from Aberdeen to Yazoo City. 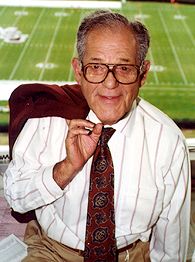 They try to copy Cristil's simple, even cadence that clearly describes the action and leaves the hyperbole behind.

It's something the Memphis, Tenn., native has been doing since 1953 in this SEC outpost.

Through 10 football coaches, nine school presidents and eight athletic directors, there has been exactly one voice calling the fortunes, and more often, failures of Bulldogs football.

Ask anyone with an allegiance to Mississippi State about the legendary voice, and they will likely have a story and a smile about the iconic Jacob S. "Jack" Cristil.

Cristil was hired for $25 a game by legendary Mississippi State athletic director C.R. "Dudy" Noble 55 years ago. At the time, no one could imagine how long Cristil would hold onto his role as the "Voice of the Bulldogs." Between football and men's basketball (which he started broadcasting in 1957), it's around 1,800 games, and counting.

"When I was a sophomore in high school, I used to spot for him and he would do a [Friday night] high school game in," Mississippi State athletic director Larry Templeton said. "And then we would get in the car and drive to Gainesville or Georgia and do a [Saturday] afternoon game and drive back after the game. This has been part of his life, and even though he had a full-time job until he retired, this was his passion and this is what drove him and he's still going strong."