<
>
Buckheit: Get your Grove on
Alabama Crimson Tide
14yMary Buckheit
Hall of Fame voting winners and losers: David Ortiz gets in, who else got good (or bad) news?
Boston Red Sox
9hESPN.com
What makes David Ortiz a Hall of Famer? Stories from those who know him best
Boston Red Sox
9hESPN.com
Ortiz accepts Hall call; Bonds, Clemens shut out
Philadelphia Phillies
9hBradford Doolittle
AB to pursue legal action against Buccaneers
Tampa Bay Buccaneers
5hJenna Laine
Clips do it again, rally from 35 down to stun Wiz
LA Clippers
3hOhm Youngmisuk
Saints' Payton steps away, unsure of what's next
New Orleans Saints
14hMike Triplett
Sources: Louisville in talks to separate with Mack
Louisville Cardinals
8hJeff Borzello and Pete Thamel
Rodgers hints his decision likely by tag deadline
Green Bay Packers
11hRob Demovsky
Auburn survives scare in 1st game ever as No. 1
Auburn Tigers
5h
Swiatek wins 3-hour quarterfinal as temps hit 97
7h
Sean Payton put the New Orleans Saints in a 'better' place, but what's next?
New Orleans Saints
6hMike Triplett
Why Sean Payton's shadow will loom over Cowboys' Mike McCarthy
Dallas Cowboys
9hTodd Archer
32 NFL teams, 32 big free-agent decisions: Which players will return to their 2021 team?
Green Bay Packers
21hNFL Nation
Dustin Johnson, Justin Thomas and Rory McIlroy all looking for different levels of better
20hMark Schlabach
How to watch the PGA Tour's Farmers Insurance Open this Wednesday-Saturday on ESPN+
20hESPN.com
'Sirens are not unusual at AFCON': Inside the stadium disaster in Cameroon
8hEd Dove
Is it dribbling or is it showboating? And where do you draw the line?
16hJulien Laurens
USMNT favors frigid forecast, but will it yield home-field advantage?
16hJeff Carlisle
No Azteca fans? No Flores call-up? Mexico faces tough task ahead of crucial World Cup qualifiers
13hCesar Hernandez
'It's not about the talent': Patrick Ewing and the battle to avoid another lost season at Georgetown
Georgetown Hoyas
21hMyron Medcalf
Breaking down the 2022 girls' McDonald's All American basketball recruits
Georgia Lady Bulldogs
12hShane Laflin
Do the New York Giants need an experienced head coach to pair with rookie GM?
New York Giants
22hJordan Raanan
Will Jon Jones be the next challenger for the UFC heavyweight championship?﻿
2dMarc Raimondi
MLB lockout latest: What can we expect from this week's negotiations?
11hJeff Passan and Jesse Rogers
Time will tell if Villa's gamble on Coutinho pays off for both sides
23hIan Darke
Balotelli's back! What has Italy striker been up to during international exile?
19hChris Wright
LIVE Transfer Talk: Tottenham's Alli wanted by five clubs
8mESPN
Which players could move before the January window closes?
2dMark Ogden
Transgender swimmer Lia Thomas stays the course
3dKatie Barnes
Oct 12, 2007

OXFORD, Miss. -- Beneath the patchwork and the paisley; behind the seersucker, Skoal and Sperry Top-Siders -- it's another world in The Grove.

Literally, until you've seen it, you can't imagine what goes on at Ole Miss for a game day.

In the center of campus at a place called The Grove, fans gather in a crock pot filled with football and formal. I'd call it a tailgate, but I'm not sure that accurately describes the catered tabletops with candelabras under tents toting chandeliers and Direct TV dishes.

While I'm still not sure I can define hoddy toddy, I'm certain I saw it last Saturday. It smelled like cologne, and bourbon, and brownies, and barbeque. It had names like Langston, and Kyle, and Caroline. It looked a little like golf and tennis and sailing. But it was really just football at the University of Mississippi.

Are you ready? Ralph Lauren eat your heart out.

The University of Mississippi is big on unofficial emblems. Shoot, the entire institution operates under an alias. So, Colonel Reb isn't the official mascot, "Dixie" isn't the official anthem, and while folks in Florida and Georgia might have officially cornered the market on big outdoor cocktail parties, Ole Miss unofficially has nabbed the best. 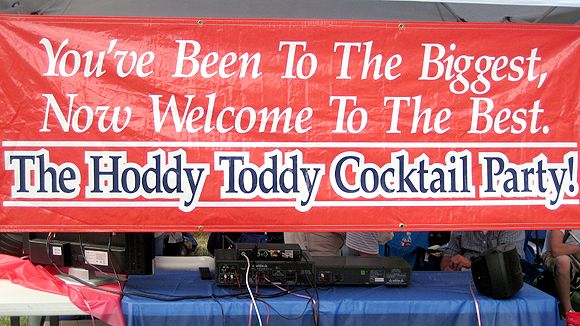 It's never too hot for Hotty Toddy Party in Mississippi.

I'm pretty sure that Polo is the unofficial apparel sponsor of Ole Miss. While it might look like we crashed a wedding on the Vineyard, this is actual a snapshot of the standard attire for football game-going frat brothers. Business casual couldn't cut it around here. And neither would a buzz cut. Perfectly pressed khakis, loafers, button downs, ties and blue blazers aren't some extraordinary paradigm, they're the norm for the gentlemen of Ole Miss and their full-feathered comb-overs. 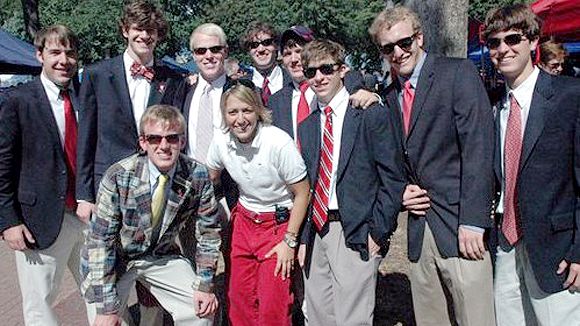 Not to be outdone, the fairer sex also breaks out their Sunday best on Saturdays in Oxford. For the ladies, nothing but a cocktail dress and heels will do. 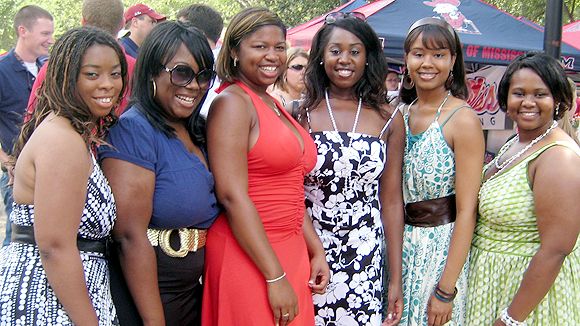 Female fans show they're just as well-heeled as the boys.

Spilling over about 10 acres of campus real estate, shaded by oak trees lies the legendary grassy patch. Coeds, catering servants, kids and alumni sporting class rings the size of tea candles gather under tents in The Grove for the festivities, many arriving before 6 a.m. On its way to the stadium a few hours before kickoff, the football team makes its way under the arch and into the sea of grovers. During the party, the arch makes for great fun and photo ops that assure you are partying like a champion. 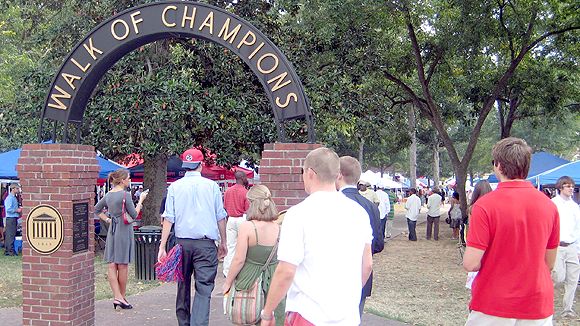 Before each game, fans and players alike walk through the "Walk of Champions" arc, which was donated by Ole Miss' only undefeated team, the 1962 Rebels.

As a New Englander transplanted to Southern California, I had a lot to learn in Mississippi . Lucky for me, the little niblets of the Dixie Dance Company were kind enough to teach me the Hoddy Toddy cheer. Are you ready (for the G-rated version)? "Hotty Toddy, Gosh almighty, Who are we? Hey! Flim Flam, Bim Bam, Ole Miss, Yes Ma'am!" 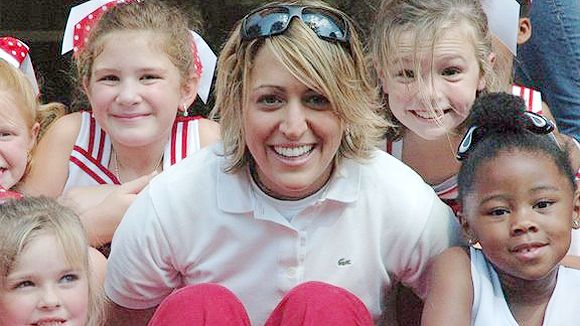 Fandom in the SEC starts at a very early age.

Only the food spread can steal the spotlight from the fashion show. They serve up anything you can imagine in The Grove  most under chandeliers, on table cloths with silver-plated servers, lots of lace and designer doilies. But in a sea of hors d'oeuvres and highbrows, barbeque still has authority and this tricked out grill was a thing of beauty. 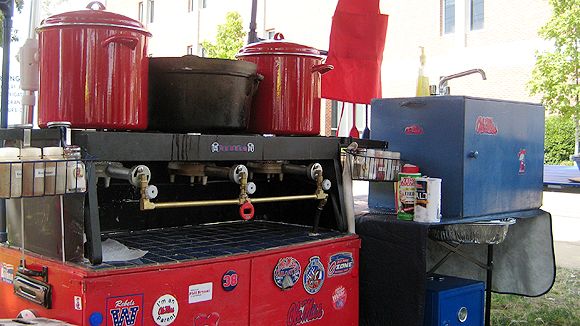 No Southern football Saturday would be complete without a healthy dose of barbeque.

I don't Grove and tell. 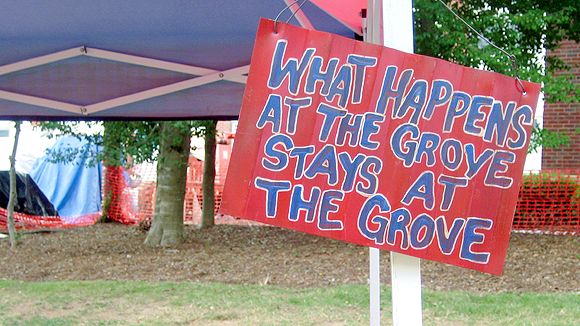 Southern hospitality reigns in the Grove, but that doesn't mean they're sharing all of their secrets.