For Spurrier, it was no socks, no tie and no problems, as the South Carolina football coach recorded his most recent weekly TV show at a Columbia television studio.

Less than nine hours after Spurrier guided the Gamecocks to one of their biggest wins, 38-23 over then-No. 8 Kentucky at Williams-Brice Stadium on Oct. 4, he was walking briskly through the WIS-TV building not far from the South Carolina campus. Former Gamecocks quarterback Todd Ellis, who hosts both Spurrier's TV show and weekly radio call-in show, was waiting for the Head Ball Coach, along with two camera men in a back studio.

The blurry-eyed Spurrier seemed to be in a hurry. Since the Gamecocks played Thursday night, he had a rare weekend off. Once the show was taped, Spurrier and his wife, Jerri, were flying to their beach home in Florida.

First, though, Spurrier had to complete his TV duties.

"[The fans] like watching them," Spurrier said of his TV show. "They want to hear about everything the coach has to say."

Football coaches at each of the SEC's 12 schools have TV shows.

Legendary Alabama coach Paul "Bear" Bryant was one of the first to have his show broadcast regionally. The shows are remembered as much for Bryant endorsing potato chips and soft drinks as any of his comments.

Spurrier didn't even wear the school colors this week. He wore a black jacket, green-and-white checkered shirt and bare feet in loafers.

The "Steve Spurrier Show" opens with -- what else? -- a South Carolina visor and football helmet.

Once the cameras are rolling, Spurrier offers a few opening comments.

"It was maybe one of the best games since I've been here with just the way it happened," Spurrier said. "The fans were super. It might have been the loudest since I've been here. And they were there for the beginning and end, which doesn't always happen." 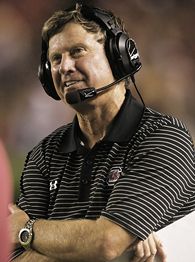 About half the show consists of highlights from the previous game; the rest of the show is filled with a few permanent fixtures, like "My Carolina," which this week is a guest appearance by baseball coach Ray Tanner, and the "Teammate of the Week." Later, Spurrier awards a game ball to a fan.

After Spurrier gives a brief injury report, the show goes to commercials. At least half the 30-minute show is filled with commercials, including advertisements for automobile manufacturers, soft drinks, a realty company and hot dogs. A local bank's logo sits in the bottom right hand corner of the TV screen throughout the show.

The TV show generates a large share of Spurrier's lucrative contract at South Carolina, which pays him about $1.75 million annually.

Spurrier endorses a few sponsors during the show, provides a testimonial for the university and is the voice of a public service announcement to curb drunk driving.

"Anything having to do with Spurrier brings instant credibility in this state," said Drew Stewart, a producer on the show.

Spurrier is most credible when talking about the Gamecocks, which is why viewers tune in each week. The show zips by and is broken into highlights from the first and second halves.

There isn't much to Spurrier's comments. When talking about South Carolina's defense, he says, "We made those guys kick a lot of field goals, which is always good." And about tailback Mike Davis, who scored a touchdown against the Wildcats: "Mike knows how to score, we know that."

One of the easier aspects of the job. It's nothing more than a 30-minute infomercial for Gamecocks football.

"It was just a wonderful night," Spurrier says, as the show neared its end. "All it does is set us up for the future. Every game gets bigger as you continue to win."