Four thousand hogs and 100 cows welcomed Greenway to his parents' 1,000-acre farm in South Dakota, as he boosted the population of Mount Vernon up to 477 during his visit.

Nearly 1,900 miles away, Hodge ate home-cooked meals prepared by his mother, Violet, who after moving from the Virgin Islands, raised Abdul and his four brothers as a single parent in South Florida. 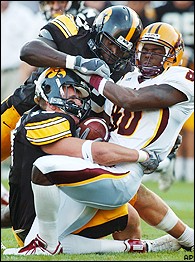 Despite opposite backgrounds, when the two head back to Kinnick Stadium for their junior season in the fall, they'll make up one of the most feared linebacker duos in the country.

When Hodge and Greenway came to Iowa City for recruiting visits over the same weekend, it didn't take long for them to click as the intrigue set in.

"I introduced myself to him and we connected," Hodge said. "I never really spoke to a guy who was raised on the farm, so it was very interesting to communicate with him."

After making the commitment to become Hawkeyes, Hodge and Greenway followed similar paths. Both redshirted their first year and saw minimal action as redshirt freshmen. Greenway underwent reconstructive knee surgery in the spring of 2002, and after a successful recovery, he was ready to prove himself during his sophomore campaign as both he and Hodge were named starters.

"From the minute they got on campus, we really had a good feeling about them," said Iowa coach Kirk Ferentz.

The two would walk past the updated tackle chart in the football complex after every game throughout their sophomore season, never failing to check who was on top. The farm boy made sure to let the city boy who was leading. But in the second to last game, Hodge took over and ended up leading the Big Ten in tackles by the end of the season.

"We're competitive people," said Greenway, the weakside linebacker who finished second in the conference in total tackles. "But we know we're better as a group than individuals."

While the two agree that Hodge, the middle linebacker, is stronger and Greenway is crazier, working alongside one another for three seasons under Parker has molded them into equally fierce competitors.

"Obviously he's black and he's from Florida. I'm white and I'm from a farm, so you're going to have some differences in our culture," said Greenway. "But on the field I think we are very similar and that makes us feed off each other."

Parker said while they still have a lot to learn, they share a hard work ethic, a product of their roots.

"Everyone goes through things, but the ones that just keep trying and working hard come to the top, and that's what she's taught me," Hodge said.

Early mornings and long days on the farm taught Greenway to be relentless. But he isn't sure if his counterpart would survive in the middle of nowhere. "There aren't many hogs in Fort Lauderdale," Ferentz joked.

"He always tells me I won't last on the farm with all the work they have to do," said Hodge, who plans to make a visit to South Dakota when the timing is right. "After he tells me all the stories, I say I might not last, but if he can do it, I can do it."

Their competitive nature steps outside the field as well. As communication majors, Hodge and Greenway often challenge one another to see who can get the higher test score and grade point average. But their biggest goal is simply to put the Hawkeyes in the spotlight as a national contender.

"I think when someone talks about a great group of linebackers, I think one thing that we want to strive for is to have the University of Iowa linebackers mentioned in that group."