Charlie Frye wasn't aware when Gene Swick broke the NCAA career passing record at Toledo in 1975 -- possibly because he hadn't yet been born. He was a toddler when Bowling Green's Brian McClure, in 1985, became the second Division I player to pass for more than 10,000 yards in a career.

Still, Frye gets the idea.

"Somewhere along the line, the Mid-American Conference became known for its quarterbacks," he said.

And the line is getting longer, with Frye apparently standing at the front. 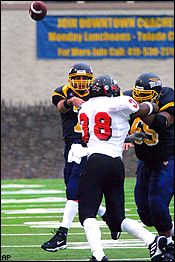 Ben Roethlisberger (Miami) and Josh Harris (Bowling Green) are off to the NFL, but there's no shortage of quality quarterbacks left behind in the MAC.

Four of them -- Frye (Akron), Bruce Gradkowski (Toledo), Josh Haldi (Northern Illinois) and Stan Hill (Marshall) -- are on the preseason watch list for the Davey O'Brien Award. That's as many candidates as can be found in the Big 10.

"The guy that first caught my eye was Chad Pennington [at Marshall]," Frye said of the MAC's success at producing NFL quarterbacks. "That's a great tradition they started and we're trying to carry it over. The guys in the future who come into this league are gonna see what they can do and it's gonna drive them."

Frye still cringes at the promotional efforts being made on his behalf at Akron, including a Web site (Frye2004.com) touting him for the Heisman.

Frye frenzy, however, is understandable. His 319.8 yards of total offense is the top average in the nation among returning players. He holds 49 school records, including the one for single-season passing after throwing for 3,549 yards in '03.

Another season like that would move Frye, who has thrown for 8,426 yards with the Zips, past Marshall's Byron Leftwich on the MAC career passing record list.

At 6-foot-4, 228 pounds, he has the size and arm strength that helped make Roethlisberger the Steelers' first-round pick. Frye also could encroach on another Leftwich milestone -- MAC player taken earliest in the NFL draft (Leftwich went to the Jaguars as the No. 7 pick in '03).

Regardless, he's likely to become the fourth MAC quarterback since 2000 to be taken in the first round, fulfilling a dream that stretches to childhood, when he dressed as a Cleveland Browns player every Halloween.

Frye's progression has been gradual -- he came off the bench to claim the starting job in the season-opening game of his redshirt freshman season. Gradkowski's was sudden, and surprising, at Toledo.

He waited for his chance, then in his first season as a starter completed 71.2 percent of his passes and threw for 3,210 yards and 29 touchdowns with only seven interceptions.

The game that caught everybody's attention came in a 35-31 victory over ninth-ranked Pittsburgh on Sept. 20. Playing in his hometown, Gradkowski set school and MAC records for completions (49) and school records for attempts (62) and yardage (461).

His 9-yard touchdown pass to receiver Lance Moore with 43 seconds remaining was the game-winner. Having both players back, along with six other starters from the nation's 11th-best offense, is first among reasons the Rockets are a top-25 caliber team.

"It's an honor to be mentioned with those other guys who played quarterback in the MAC, or to hear your name for different awards, but I just ignore it and look at what we're trying to accomplish," Gradkowski said.

"We've got a lot of seniors on this team and we want to win a MAC West title and a MAC championship. That's where my focus is."

Haldi (2,544 passing yards, 25 touchdowns and nine interceptions) made his mark last season at Northern Illinois in the school's upset victories over nationally-ranked Maryland and Alabama.

Hill suffered a knee injury that required surgery late in the third quarter at Tennessee, with Marshall trailing, 28-24.

Though Frye, like Gradkowski, prefers to think about what his team could accomplish instead of the individual awards, he admits to some excitement about being a MAC quarterback.

Before Akron's Oct. 4 game at Miami last year, Frye said he sneaked into the Zips' film room on Sunday and grabbed a defensive tape to check out Roethlisberger and see what the buzz was about.