If you want to locate the Big Bang of the passing game in college football, the time and place in which the aerial movement all began, you must go back more than 40 years to an obscure school in the Southwest.

Before BYU, before Bill Walsh and the West Coast offense, before the run-and-shoot, there was Tulsa.

"If you talk about the school that revolutionized the passing game," said former Golden Hurricane quarterback Jerry Rhome, "it's Tulsa." 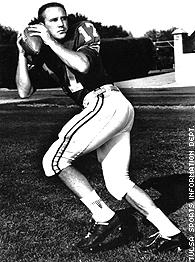 First school to average 300-plus passing yards per game: Tulsa, in 1964, shattering the previous per-game record by 80 yards. First quarterback to throw 30-plus touchdowns in a season: Rhome, in '64. First receiver to catch 100-plus passes in a season: Howard Twilley, in '65.

The play that scared so many coaches became the Golden Hurricanes' coin of the realm.

Or, if you dared, you could throw for a bazillion yards and win games. Which Tulsa did, going 33-19 in the five-year stretch from 1962-66 and playing in two bowl games.

Rhome went on to coach 24 years in the National Football League, many of them as an offensive coordinator. But before that he was a record-setting Tulsa quarterback whose 1964 season was so spectacular that he lost the Heisman Trophy to John Huarte of Notre Dame by just 74 points.

Rhome's numbers were pure mythology for the time: 32 touchdowns, four interceptions, 2,870 yards and a 69 percent completion rate. He easily led the nation in every passing stat, and led his team to a 9-2 record and a Bluebonnet Bowl victory over Mississippi. His efficiency rating of 172.6 still ranks 13th all time -- the only rating in the top 30 that predates 1980. 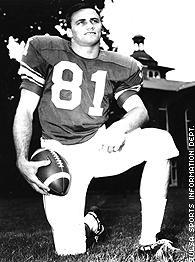 The next year, Twilley caught a preposterous 134 balls -- his 13.4 receptions per game still stands as the NCAA record -- and was the Heisman runner-up to USC running back Mike Garrett.

"If there was anybody who deserved the Heisman, it was Howard Twilley," Rhome said. "He was so far ahead of every receiver."

The Tulsa Experiment was overshadowed while it happened and overlooked in the history books, but it's a Hollywood story with a tumbleweed backdrop.

The passing offense was the brainchild of coach Glenn Dobbs, who had the gall to contradict the universal coaching wisdom of the day. Dobbs hired a fellow named Sammy Baugh as his quarterback coach.

Talk about a different time. Baugh, to this day considered one of the finest quarterbacks in football history, spent some of his post-NFL glory years living in a Tulsa campus dorm room next to Rhome.

"He would bang on the wall for me to come over," Rhome said. "We'd sit there and talk football."

With tobacco spit flying into a spittoon on the floor and cusswords bouncing off the walls, Baugh would diagram plays on a chalkboard. Rhome, the son of a Dallas high school coach, soaked in everything.

"All the stuff he taught me, I used the rest of my life," Rhome said.

While the rest of the nation played the game in bunched masses on the ground, Tulsa pushed the passing-game envelope. It shifted tight ends. It ran receivers in motion. It dabbled with the shotgun.

"We were just way ahead of the game," Rhome said. "We'd split people out, and defenses didn't know how to handle us."

At times, the plays were sandlot simple: "Bobby, shift after the cadence starts. We'll run a hook and I'll drop straight back." Rhome called them himself, just as he had in high school.

He'd begun his career at hometown SMU, but when a new coach arrived and changed philosophies to a run-centric offense, Rhome transferred. The coach was a Mr. Hayden Fry, who years later, at Iowa, let Chuck Long pass his way to a runner-up finish in the 1985 Heisman voting. A few years after that, Rhome said that Fry admitted, "Jerry, you were right," about wanting to throw the ball.

But those words were decades in the future for Rhome in the early 1960s. At the time, the only option was a transfer.

On a recruiting visit to Tulsa, Rhome appraised the huge offensive linemen and heard his coach say, "We live by the pass."

His response: "This sounds like the place for me."

Rhome canceled a visit to Nebraska and loosened up his arm. With half a dozen players imported from Canada, plus a large group of California junior-college players and D-I transfers, Tulsa was a loose and eclectic confederation of talent, performing cutting-edge strategy.

By the time Rhome was done pitching, he'd thrown for a then-NCAA record 5,472 yards. That helped make the passing game something of a cottage industry in the Southwest. Rhome's record was broken, first in 1967, by Billy Stephens of UTEP (6,495 yards), and then by Steve Ramsey of North Texas, in 1969 (7,076 yards).

Rhome played eight years of pro ball before retiring in 1972. He returned to Tulsa as offensive coordinator to head coach F.A. Dry, and worked with a receiver named Steve Largent.

But after three years he moved on to the NFL and never looked back. Tulsa's passing dynasty became a blip in the record books, too easily overlooked and forgotten. That's too bad, given what came after the Tulsa Experiment.

"We didn't invent the passing game," Rhome said. "But we had enough guts to do it when it wasn't the popular thing to do."