COLLEGE PARK, Md. -- "What a lot of people do," Ralph Friedgen said one late summer morning, "is they see how a defense played for the last four or five games, and they plan on the defense being that way.

"My interpretation is that the defense has been game-planning for us. I try to get an understanding of what they like to do, because they will adjust to [our] formations. What's the coverage?

"Then I break us down. What do our tendencies look like? If you have a tendency, that's not bad. That means that's what you do well. I want to know what they know. If I'm them, this is what I do to stop what I do."

"You anticipate what their adjustments are going to be," Friedgen said. 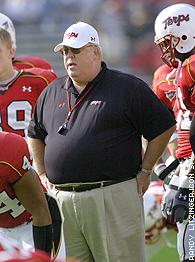 The idea, quite simply, is to find a coach to explain how he watches video. It is one of the go-to clichés for every modern coach: We won't know until we see the film.

Coaching video has a 1-2-3 rhythm: scoreboard, sideline view, end-zone view. There is no slow-motion, no color analyst. It is raw material, ready to be interpreted in as many ways as there are coaches who watch it.

When we looked for a coach to teach us how to watch, it didn't take long to enlist Friedgen, aka, Resurrector of the Lifeless Turtle. In four seasons at Maryland, his alma mater, Friedgen has a record of 36-14 (.720) and one Atlantic Coast Conference championship.

Every coach and every player watches video every week. But a few coaches are known for their ability to dim the lights and pick apart an on-screen opponent -- or his own team -- with the precision of a jeweler.

"Ralph started out as a defensive line coach, so he knows how we work," said Central Florida defensive coordinator Lance Thompson, who worked with Friedgen at Georgia Tech in the late 1990s. "He's really good at knowing what adjustments you're going to make, at finding the softest spot."

There was the 1999 Gator Bowl against Notre Dame, when Friedgen was the Yellow Jackets' offensive coordinator. Friedgen zeroed in on a defensive lineman.

We recently sat down with Friedgen, a pioneer in the use of digital video and a grandmaster in the chess matches played on autumn Saturdays.

"Another thing is finding the philosophy of the defense," he continued. "When I break a coverage down, I look at what the formation is -- OK, this is cover two, that is cover three -- but I want to know what percentage of the time is it man? What percentage is zone?

Then you know how to call plays. Friedgen rises from his chair and grabs one thick three-ring binder from a shelf full of them. It's the game plan for Northern Illinois last year, a team Maryland had played in 2003.

"It's amazing," Friedgen said. "Year in, year out, [defensive coordinators] will stay the same. If he's changed, why? Personnel? Scheme change? I haven't found that there is a big variance. Guys are locked into who they are. I see guys who, once you cross the 50, they change. Navy [Maryland's season-opening opponent on Sept. 3] is a zone team until you get in the red zone. Then they will man up with you. They are as conservative as they can be. Get inside the 25, they come after you."

Friedgen has been studying video since before there was video. He is old enough to recall the days of 16-millimeter film, which is to digital video what the typewriter is to the BlackBerry.

"When I was here as a GA," Friedgen said, referring to his days working on Jerry Claiborne's staff as a graduate assistant during 1970-72, "it was my job to pick up the film at 4 a.m. at National Airport in Washington. Coach Claiborne would come in at 5 a.m. on Sunday and watch the game. He would watch until 10 and go to church.

"He didn't," Friedgen said, smiling, "allow me time to go to church. I would watch the tape. He sat here. I sat next to him, and he's talking to me the whole time. He'd watch offense, defense and special teams. I watched it all. It was a tremendous learning experience.

"You would watch a play and you'd write down the defense and the coverage by formation. You'd have a chart. You'd write down front and coverage, down and distance.  It used to take me all day Sunday. Now it takes me 25 minutes."

Friedgen adapted quickly to the computer age a decade ago. Then with the San Diego Chargers, he went to the Senior Bowl one year and noticed younger assistants carrying laptops. He had one of his daughters teach him how to set up a database, and then he began logging in his charts.

Now the categories in his charts are in the software. One of Friedgen's grad assistants watches the tape, logs in down and distance, defensive front and coverage.

"You're watching the same defense in the same formation," Friedgen said. "I can show the quarterback where the free safety is when they run a corner blitz. The safety is 4 yards off the hash instead of 2.

"I hardly ever watch a game in its entirety. It's all by situation. You used to have to show the whole film. Now I can say, 'Here are five blitzes I want you to see. Watch where the free safety goes. Here are five shots of their favorite coverage out of this formation.' You're so much more efficient in showing your players what you want them to see."

Friedgen walks down the hall from his office to the offensive staff room. It is a long, narrow room, dominated by a long, narrow table. On one of the short ends of the room there is a computer. At the other end is a big screen.

A faulty remote delays Friedgen for a moment -- director of football operations Tom Deahn changes the batteries -- and then Friedgen spins in his chair to a computer and begins to call up video on the screen. He spins back, grabs a laser pointer, and starts barking tips to deal with the defense on the screen.

"This guy is 12 yards deep," he says, pointing a red dot at a West Virginia safety from last season's 19-16 overtime loss."

The red dot swerves to the nearby cornerback.

At the snap, the safety takes one step back, the corner moves forward.

"How can a team beat Florida State and get beat 55-6 by Virginia Tech the next week?" Friedgen asked, forgetting the 16-0 loss to Virginia in between. "It's a crazy game."

His attention returned to the screen.

"Florida State is in cover two," he says. "Normally they like to play cover two in second-and-long. What is it?"

At the bottom of the screen, it says, second-and-10. Friedgen chuckles.

Back to West Virginia. Deep in the Mountaineers' territory, cornerback Adam "Pac-Man" Jones makes an interception, snuffing a Terrapin drive. Jones would become the sixth pick of the 2005 NFL draft, but Friedgen chided him here.

"Pac-Man rolls up. The safety didn't back up," Friedgen said. It makes no sense to him. "The corner is supposed to play deep. He has no help."

He runs the play back and forth a couple of times, as Jones intercepts Maryland quarterback Joel Statham.

"The ball gets tipped at the line," Friedgen said. "It should have been a touchdown for us. The corner screwed up and he got lucky."

The next generation of digital video, Friedgen expects, will incorporate PlayStation features into real life. Take a play, move your mouse over the quarterback, and you see what he sees. He can't wait. It's one advantage he can gain, one more way to capture the opponent's queen on those autumn Saturdays.