OXFORD, Miss. -- This is the heart of the Old South, home of magnolias, home of adjectives like languid and torpid, home of drawls and sweetness, from iced tea to women ("Isn't she the sweetest?"). Gentility isn't making a comeback at Ole Miss. It never left.

The last coach of the Rebels, David Cutcliffe, embodied traits right out of the Southern Gentleman's Handbook: soft-spoken, courteous and loyal to the bitter end. When Cutcliffe refused to make staff changes after going 4-7 last season, he found himself out of a job. 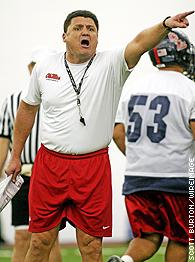 Exit quiet. Enter culture shock. Enter Ed Orgeron, who grew up one state over in Louisiana and about 10 notches over on the intensity dial. Enter a fog-cutter voice and a New Yorker's motor. Defensive line coaches, like their players, are known for their explosiveness. How hard does Orgeron go?

"He's immune to Red Bull," offensive line coach George DeLeone said. How can you ramp up someone who has already put his foot through the floorboard?

Orgeron, 44, isn't out to change the culture anywhere, except within the team meeting room. It is there, in his introductory meeting with his players last January, that he did or didn't rip off his shirt and challenge any of them to take him on.

The story metastasized on the Internet to the point that it became irrelevant whether he did or didn't. Orgeron neither confirms nor denies. Quarterback Micheal Spurlock said it didn't. But it is part of what longtime Ole Miss sports information director Langston Rogers calls "the Ed Orgeron folklore."

How many head coaches who are 11 days away from their first game have their own folklore? About as many as have four national championship rings. Orgeron won two (1989, 1991) at the University of Miami. He has won a ring in each of the last two seasons at USC. He had 10 defensive linemen from those two schools selected in the first round of the NFL draft.

How many head coaches ask their quarterbacks to line up "on the blocks" and knock the hell out of each other in one-on-one drills?

"My first thought," said offensive coordinator and quarterback coach Noel Mazzone, who had never coached with Orgeron, "was, 'Quarterbacks on the blocks. OK, that's different.'

"My second thought was that I was going to make sure the kickers were in [the quarterbacks'] group.

"That was one of many firsts," Mazzone said. "It's really been fun. I don't know where he gets all that energy. I've never been around practices where there has been so much energy. Then it gets contagious. It's not tangent energy. It's a little kinetic. By the middle of the spring, you started to think, 'This is how I've always practiced.'"

Orgeron said it took him half of spring practice to figure out that he couldn't coach the other positions the same way that he taught defensive linemen, who benefit, by his account, from being poked with a sharp verbal stick. But Spurlock, the leading candidate to win the starting job, is enjoying the change.

"You can almost see the fire in his eyes," he said. "You hang on his every word. You see the fire coming back into the players' eyes that you haven't seen for a while."

That's the attitude that Orgeron wants to instill.

"As far as approaching the whole team, when I'm in the team meeting, I'm very aggressive," Orgeron said. "I think meetings have to have intensity. They have to be into it. I want energy in the meeting."

Trojan coach Pete Carroll put Orgeron in charge of the Friday team meetings. Rockne speeches aside, the Friday meeting, and not the pregame locker room, is when coaches appeal to their players' emotions.

"I was the vocal guy," Orgeron said. "Crank it up. Pete gave me control of how the team got ready. I was the hammer. He was able to do the thinking and the organization."

But Orgeron also proved organized enough to serve as Carroll's recruiting coordinator. It is that mixture of hot and cool that Orgeron sold to Ole Miss. It is an experiment even his own staff watches with interest. DeLeone coached the offensive line at Syracuse in the mid-1990s when Orgeron coached the defensive line.

"He forced the offensive line every day to compete their ass off or they would be embarrassed," DeLeone said. "Everybody on defense either caught on or they were going to be left behind."

DeLeone has been a college football coach for the last 35 years, save for one when he went to the NFL. He didn't like it, and he came right back. If he hasn't seen it all, he has seen most of it.

The biggest question about Orgeron is whether he can calibrate his intensity. Where is the line? Three members of Orgeron's first signing class have voluntarily left the team since practice began earlier this month. It could be that Orgeron didn't know when to stop. It could be, as Orgeron suggested, that when you have a month to assemble a recruiting class, you don't make the best choices.

On signing day last February, Orgeron made scholarship offers to 25 juniors for next February. He meant what he said, but he also did it as a symbol. He wanted the recruits and the other schools to know that a new era has begun at Ole Miss. Languid and torpid need not apply.