LOUISVILLE, Ky. -- Louisville sophomore quarterback Brian Brohm had just finished throwing completion after completion in a 7-on-7 passing drill in the summer heat. In an hour's time, you could count on one hand the number of Brohm's passes that hit the ground.

When he was done, I ran some theoretical quarterback stats by the kid. 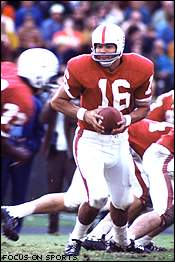 "Suppose a guy throws for 2,700 yards, with 18 touchdowns and 18 interceptions, and completes 53 percent of his passes," I said. "Where would that get him with Bobby Petrino?"

"I think he'd be on the bench," Brohm said. "That wouldn't fly in this system. Efficiency is the name of the game."

Congratulations, Brian. You've just benched Jim Plunkett in his Heisman Trophy-winning season at Stanford in 1970 -- and done it justifiably.

Plunkett deserved the hardware he won, but his career passer efficiency rating was an anachronistic 129. Brohm and Louisville starter Stefan LeFors had a combined efficiency rating of 174.4 in 2004, a number that led the nation. The Cardinals' QBs teamed up to complete 71.3 percent of their passes, with 27 touchdowns and five interceptions.

Gaudy numbers. Crazy numbers. Numbers that dwarfed Plunkett's -- but weren't enough to win any of them the Heisman.

Ironically enough, what Plunkett did helped change the culture of college football. Two years after Plunkett won the Heisman, his success inspired the new head coach at BYU -- a guy named LaVell Edwards -- to make passing the Hall of Fame hallmark of his offense.

"I remember thinking that Stanford was a lot like BYU," said Edwards, on the eve of his induction into the College Football Hall of Fame. "A private school with the same kind of problems getting kids in school. I just decided I was going to throw the football."

Edwards' teams threw it well enough to win 257 games and a national title. What had been a third-down act of desperation for most college teams became an any-down way of life for the Cougars. And the quarterbacks flocked to BYU like paparazzi to Brad and Angelina -- Gifford Nielsen, Marc Wilson, Jim McMahon, Robbie Bosco, Ty Detmer, etc.

"We just snapped 'em out there every year like we knew what we were doing," Edwards said with a laugh.

But by 2005 standards, Plunkett, the catalyst for all of that, couldn't get on the field.

That tells you how far forward the forward pass has come in college football. Compare the numbers from then with the numbers from now, and it's like going from the rotary phone to the BlackBerry. 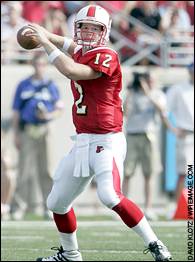 Offensive football steadily has metamorphosed from the Notre Dame box to the single wing to the wing T to the wishbone to the I formation to the run and shoot to the West Coast to the spread, with countless other variations and mutations along the way. Where next, nobody knows. But for today, it's more important than ever to throw the ball -- not just frequently, but efficiently. High completion percentages and low interception totals are the modern imperatives.

Once upon of time, when the handoff ruled the Earth, hard-shelled Michigan coach Bo Schembechler called BYU's offense "Communist football." It's hard to imagine Chairman Mao calling plays in Provo, but it was equally hard to imagine the cavemen coaches in the Midwest and Deep South chucking the ball all over. Today they do.

In the Woody-and-Bo days, coaches solemnly said that three things could happen when you threw the ball, and two of them were bad. (In fact, this is one of the game's earliest coaching clichés.) Funny thing: Petrino, architect of one of the elite passing offenses in the country, used to hear that very bromide from his dad.

Bob Petrino Sr. was an NAIA Hall of Fame coach at Carroll College in Montana -- and he ran the option. Today, when the old man talks football with his oldest son, does he still bring up the two-out-of-three-are-bad axiom?

"He never does," Bobby said with a smile.

From the prehistoric days of Gus Dorais to Knute Rockne (you remember 1913, don't you?) to today, it's been a drastic evolution. Heck, as Plunkett's numbers show, there has been drastic evolution in just the last 35 years.

A few other comparisons:

The same year Plunkett won the Heisman and Archie Manning finished third, Kansas State quarterback Lynn Dickey finished 10th in the voting -- while throwing an ungodly 28 interceptions with just seven TD passes. A quarterback would be busted down to the scout team before reaching such an interception total today. Nobody threw more than 19 picks in all of Division I-A last year, much less anyone who finished in the Heisman top 10.

How many Notre Dame fans have been dreaming of the Saturday when Brady Quinn starts playing like Joe Montana? Statistically, he's playing better than Joe ever did in a gold helmet. Quinn has 26 career touchdown passes and 25 interceptions in two years; Montana had 25 of each in his entire Notre Dame career. Quinn has thrown for 4,417 career yards; Montana threw for 4,121.

"That's kind of cool to think about," Quinn said. "But there's a ton of improving to do on my part."

The modern quarterback does many things that the Plunkett-era quarterback did not. He changes personnel from play to play. He changes plays at the line more frequently. He has more receivers to choose from on any given play. He benefits from rules changes that have allowed offensive linemen to use their hands more in pass protection.

Most significantly, he throws the ball short, taking 4 or 5 yards where the Old School QB is trying to force the ball downfield for 14 or 15. Those high-percentage patterns didn't exist in the past.

"You're taking a 5-yard completion or a check-down to a running back as a positive play," Petrino said. "They didn't have check-downs. That's the difference in the philosophy of how you throw the ball. They used to run for those yards on first and second downs, then throw it deep."

There are shorter throws, more throws to tight ends and backs, more throws that aren't on obvious passing downs. The natural outgrowth of that is a higher completion percentage.

More and more, coaches are able to find those QBs who can complete two-thirds of their throws. Trickling down from the pros to college to high schools, sharper passing attacks simply breed sharper passers.

"Quarterbacks are just a lot better now," said Kentucky coach Rich Brooks, who has seen the game transform dramatically since starting his first head coaching stint at Oregon in 1977. "They're more skilled, more developed in their fundamentals than they were even 15-20 years ago.

"That's come with the advent of all the summer stuff players can do. The passing tournaments, passing camps -- when you don't have pads on, that's the only thing you can do."

Brohm did all that summer stuff as a teenager, on the way to establishing himself as the No. 1 quarterback prospect in the country. After a season as a backup, he's ready to take the reins in Petrino's offense -- and, if things go as planned, he's ready to put up numbers that seem fictitious by 1970 standards.