College football has developed a cult issue within its ranks. The Cult of the Coordinator.

For decades we seemed to get along fine without watching the weekly facial twitches of the second lieutenants who call plays and formations during football games. Surely Ara and Bear and Bo and Woody and Barry and Darrell all had coordinators -- but does anyone remember their names, much less recall seeing them a dozen times per televised game?

Whether it's a result of greater sophistication by fans or television itself, we know our coordinators much better now. They're on screen -- and on the minds of fans -- almost as often as the head coach.

It should be noted that the Cult of the Coordinator is not just a TV phenomenon. Offensive and defensive coordinators are routinely cussed and discussed on talk radio. They're saluted and slammed on message boards. They're interrogated and exalted in newspapers. When they're hired or fired, it's significant news.

Gradually, coordinators are getting contracts proportionate with their newfound stature and scrutiny. Multiyear deals that pay solid six-figure annual salaries are much more common now.

Last year, Wisconsin coach Barry Alvarez tied his coordinators' contracts to his own -- effectively giving them a five-year deal, unheard of for assistant coaches. When Houston Nutt hired away Reggie Herring from North Carolina State this past offseason to be his defensive coordinator, Herring got a three-year contract.

So today we wonder: which head coaches out there still call plays and develop game plans, and which delegate? Who is hands-on, and who is hands-off?

Bottom line: Who coaches, and who is a CEO?

By ESPN.com's estimation, about one-fifth of the 119 Division I-A head coaches serve as their own offensive or defensive coordinators. Interestingly, nearly three times more members of that group work with offense (approximately 19 head coaches) than defense (roughly seven).

(Makes you wonder about one of football's ancient axioms: If offense sells tickets and defense wins games, why do so many more head coaches involve themselves with the ticket-selling side than the game-winning side?)

Among the offensive play callers: Steve Spurrier of South Carolina, Charlie Weis of Notre Dame, Mark Richt of Georgia, Houston Nutt of Arkansas, Bobby Petrino of Louisville, Mike Leach of Texas Tech, Chan Gailey of Georgia Tech, Dirk Koetter of Arizona State, Mike Riley of Oregon State, Walt Harris of Stanford and Rich Rodriguez of West Virginia. Many of them have titular offensive coordinators who help develop game plans -- but in a lot of cases, the title is a way to get an assistant more money.

The defensive guys are led by the Pete Carroll School of head coaches: Carroll himself at USC, former assistants Ed Orgeron at Mississippi and Nick Holt at Idaho, and Carroll's close friend Greg Robinson, now at Syracuse. Others include North Carolina's John Bunting, BYU's Bronco Mendenhall and Rutgers' Greg Schiano.

Some head coaches gravitate to one side or the other because they've just moved up the chain of command from a coordinator spot.

"My dad called the plays for a long time, then gradually weaned himself off it," Clemson's Tommy Bowden said of legendary father Bobby.

Others are play-calling lifers, regardless of how long they've been a head coach. Which, combined with the myriad duties of a head coach, can make for a lot of long days.

"The rest of it" includes checking in with defensive and special teams coaches, administrative duties, dealings with athletic director Frank Broyles, media demands or other face of the program obligations. At practice, Nutt will make some general comments to the entire team, then put on his coordinator's hat again.

The defense belongs to Herring.

And it's largely the same on game day. Calling the plays is "part of the game I really enjoy," Nutt said.

The division of labor is largely the same with recruiting. Defensive tape lands on Herring's desk, offensive on Nutt's. Nutt views film of defensive prospects that Herring recommends, and he makes the final call on who gets scholarship offers and how many go to each side of the ball, but Herring is the defensive gatekeeper. 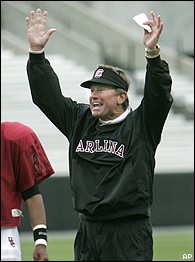 Some coaches are famously uninterested in the unit they don't coach. When Spurrier was at Florida and shopping for a defensive coordinator, he reviewed the national defensive stats and saw that Kansas State allowed opposing offenses significantly fewer plays per game than the Gators.

There is another wide layer of head coaches who could be considered strategy wonks for one side of the ball, even if they're not calling the plays on game day. On the offensive side, the leaders are Jeff Tedford of Cal, Urban Meyer of Florida, Ralph Friedgen of Maryland, Joe Tiller of Purdue and Gregg Brandon of Bowling Green. On the defensive side, there's Chuck Amato of North Carolina State, the brothers Stoops, Bob of Oklahoma and Mike of Arizona, and Al Groh of Virginia.

And then there is the CEO class of coach -- guys who stay more attuned to the big picture than to the specifics of scheming it up on either side of the ball. Among them: Mack Brown of Texas, Barry Alvarez of Wisconsin, Bobby Bowden of Florida State, Lloyd Carr of Michigan and Joe Paterno of Penn State.

"I hire guys and give them positions," Alvarez said. "I stay out of their business and let them do it. If I have to do their jobs, too, I don't need them.

"In meetings I have 51 percent of the vote. I have veto power. And in a game, if I see something I want, I'll call it. I don't want to screw up the flow of the game, but the head coach always has to have that prerogative.

"I manage the game. My coordinators' responsibility is to call the game."

Yet even the CEO types tend to have a greater expertise on either offense or defense. Paterno, for example, has always spent his game planning time with the offense.

The next question: If you don't wear a headset, are you still in the game?

Head coaches without headphones are about as rare as coaches with ties -- Paterno and Howard Schnellenberger of Florida Atlantic, two of the greats of their profession, both go without the headset. (And, coincidentally or not, both still wear sideline ties.)

Most everyone else wears the headset nowadays -- some just for appearance, no doubt.

"They're paying that guy a lot of money to wear a headset," said Clemson's Bowden, who is withdrawing himself more from the offensive play calling this year but will still be on the phones during games. "But I'm a delegator, not a micromanager."

Early in Mike DuBose's disastrous tenure as head coach at Alabama, DuBose took some flak for not wearing a headset. (Perhaps only in the state of Alabama could that become a front-burner issue.)

Nowadays, it wouldn't matter. We'd just look for the coordinator on TV.