If Marcus Vick's offensive line protects him the way the Virginia Tech hierarchy has this preseason, they won't have to wash the quarterback's jersey once all year.

Nobody will lay a hand on him.

Tech did not take its prodigal QB to ACC media days in Hot Springs, Va. When media members inquired at that event about the possibility of a short jaunt to Blacksburg to talk to Vick, they were given the David Spade Capital One response: no, nyet, nein, nunca, saint happenin'. Since fall camp started, Vick's availability has been limited to twice-weekly group interviews, with Tech personnel present. There have been no one-on-one interviews. And those planning to be part of the group interviews are given a preemptive warning that the junior is not very receptive to questions about "the past." 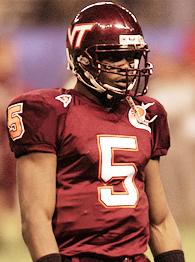 Tech has its reasons for guarding Vick like KFC's secret recipe. The confluence of circumstances -- legal problems and a suspension from school in 2004, a surname that conjures towering expectations, stunning raw talent, leading-actor status on a top-10 team -- has made Marcus Deon Vick America's most scrutinized quarterback who has never started a college game. And if he really is The Second Coming of big brother Michael, the Hokies sure don't want him melting down under media heat before he can get on the field and prove it.

But Vick The Younger has shown signs that he's ready to scramble outside of the school's protective pocket and survive, perhaps even thrive. He's taken the hits since returning to Virginia Tech eight months ago, endured the scrutiny -- and, in his estimation, "I seem to have handled it well."

Lord, it's hard to be humble when you're 21 years old, you run a 4.28 40-yard dash, you throw bullets and you're driving a BMW around Blacksburg, courtesy of your brother's nine-figure NFL contract. But humility is the new mantra in Marcus Vick's life.

"Everything that has happened to him has made him so humble and appreciative," said Tommy Reamon, who coached both Vicks at Warwick High School in Newport News, Va., and remains close with both. "That's why Marcus is now going to be a great college football player. There's not even a question -- he will be a great player this season from day one.

"The public is vicious, now. He knows that. He wants to prove to everyone it was a stupid mistake, he's past it, and that he's one of the top quarterbacks in the country. He's humble and he is excited."

Lesson in humility
Humility presented itself to Marcus Vick suddenly and nonnegotiably last summer, when he was sent home after two run-ins with the law. First was a conviction in May 2004, along with two teammates, on three misdemeanor counts each of contributing to the delinquency of minors for serving alcohol to 14- and 15-year-old girls. Two months later he was charged with reckless driving and possession of marijuana, and his season was over.

Reamon was surprised when it happened. He'd seen Vick back home in the Tidewater area last summer, and everything seemed to be going well.

Marcus had given a glimpse of the future in 2003 -- throwing a touchdown bomb, catching a TD bomb and running for 102 yards as a backup. Now he was battling senior Bryan Randall for the starting quarterback job, and many people suspected he'd win the job in August and start for Virginia Tech when defending national titlist USC came to play the Hokies in Washington, D.C.

But Reamon also knew the spectacular lifestyle change that had hit Marcus as an impressionable teenager, and the difficulty in staying grounded in such a situation. Reamon believes the dizzying leap from a lifetime of poverty to fabulous wealth contributed to Vick's poor decisions at college.

"I was with Michael at the Heisman ceremony, at the draft," Reamon said. "During that time, I had to deal with Marcus. Life after that, the rest of his senior year [at Warwick], I had to watch him just become rags to riches.

Marcus disagrees with Reamon on the corrupting effect of fame and fortune.

"I was well prepared for what was happening to my family," he said.

But you wonder whether he brought the same kind of hunger to Blacksburg that Michael was packing years earlier, coming out of that apartment in Newport News.

In a Q & A with the Richmond Times-Dispatch earlier in his college career, Marcus was asked what he'd ask for if offered anything. He responded that he had everything he wanted.

Then last summer, football was taken away. Just like that, there was a void in Vick's life.

"He was devastated," Reamon said. "He had to walk it alone. I told him, 'This is life telling you a story, and you gotta do it on your own.'"

Vick spent part of his time at home in Virginia, and part of it at his brother's mansion in Atlanta. That at least provided him with one anchor, to keep from drifting.

"The positive was having his brother there, to still look up to something," Reamon said. "He could go see his brother and stay close to the action, keep dreaming."

But the dreams had limits. Marcus didn't have the heart to follow Virginia Tech's season closely, often staying away from the TV when the Hokies were playing.

In what was predicted to be a rebuilding year, Randall led Virginia Tech to a 10-3 record and a Sugar Bowl berth. That might have been the ultimate humility check: While Marcus struggled to move on without the Hokies, the Hokies were doing just fine without Marcus.

"He wasn't around," King said. "He didn't have any chance of winning us any games, so he wasn't really a topic of conversation.

Vick did that. But when he came back to school in January, he had to regain his teammates' trust. He began with an apology, then went about proving himself all over again.

He worked diligently in winter conditioning, but that was nothing new -- Marcus had always been a hard worker. At spring practice he established himself as the best quarterback on the team, and proved he could be counted on.

"When he came back, he addressed everyone," King said. "Then he had to go out and prove it, and I think he did that in spring practice."

Summer was last year's trouble time. It's been this year's quiet time for Vick. But when the season arrived, so did the nationwide curiosity.

"He's a very good person," defensive end Darryl Tapp said. "He worked every day in practice, worked hard in the weight room, and I fully expect him to recover from the mistake he made. That's life. Because of the magnitude of his name, it made more headlines than it would if he were a regular student."

The name is magical to Virginia Tech fans, and a household name to football fans everywhere. It's used to help sell video games and shoes. It conjures images of a player who pushes the human limits of what a quarterback can do. 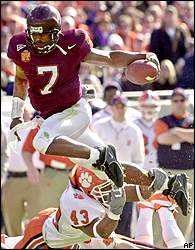 It's good to be a Vick. But not necessarily easy.

For Vick The Younger, the expectations and comparisons are unavoidable. Same school, same position, roughly the same size and the same outrageous athleticism.

The only distinct difference is throwing arm: Michael is a lefty, Marcus is a righty. Oh, and the fact that Michael never got into headline-causing trouble at Tech.

But here again, Virginia Tech is doing its best to alleviate pressure on its QB. The company line: discourage comparisons -- and not just to Michael Vick, but to Randall, who proved to be a charismatic leader last year.

That echo you heard is head coach Frank Beamer.

"Be Marcus Vick," Beamer said. "And trust me, this is a talented guy who can establish his own name. Wherever you go, they're always going to compare him to his brother. If he just does what he's capable of doing, I think he's going to have a fantastic year."

While Vick is capable of great athletic feats, he's still a work in progress as a team leader. It's coming along, he said.

"I want to be more controlling, getting [teammates'] attention during a game," Vick said. "Because, hey, I'm the shot caller. I want them to know that."

He certainly won't have to wait long to feel the pressure of being The Man. Virginia Tech opens a season of great expectations at North Carolina State Sept. 4, in a game that has land mine written all over it. The Wolfpack upset the Hokies last year and return a stellar defense that will test the new starting quarterback's myriad skills immediately.

After what Marcus Vick put himself through in the last year, that challenge will be a joy.

"I try not to take anything for granted," he said. "Appreciate every day. Appreciate life.