HOT SPRINGS, Va. -- If Boston College thought it was going to tiptoe into the Atlantic Coast Conference under the cover of tepid expectations and modest reputation, that cover is blown like Valerie Plame's.

There's no need to investigate leaks or jail reporters in this case, though. Everybody sees the Eagles coming. 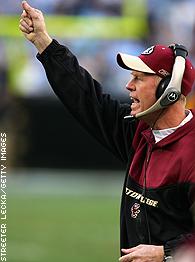 Virginia Tech tight end Jeff King: "It's just another championship contender coming into the conference. It's not out of the question for BC to win it."

Miami offensive tackle Eric Winston: "They're a lot like Virginia Tech. They have a lot of talent, but they pride themselves on hard work and really getting after it."

Miami head coach Larry Coker: "They're a class program, and I don't think people understand how good a program they really are."

ACC media: They named defensive end Mathias Kiwanuka the preseason Player of the Year before he'd ever played a down in the league.

America's football coaches: The USA Today preseason poll ranks Boston College No. 22, the fourth ACC team in the Top 25 behind Virginia Tech, Miami and Florida State. It is the first time in a decade the Eagles have been ranked in the preseason, and it further stokes the stakes for BC's ACC opener, at home Sept. 17 against traditional league kingpin FSU.

For a program that normally is ignored in August, this is like going from wallflower to prom king overnight. The flattery is so thick that BC coach Tom O'Brien doesn't trust it.

Shown a copy of the preseason ACC media poll that had the Eagles a competitive second in their division to perennial power FSU, O'Brien responded, "You guys don't have a clue. I think it's the overreaction to Virginia Tech and the result of the bowl game."

O'Brien could have a point. The Tech Effect is pronounced: The Hokies barged over from the Big East and won the ACC in their first year in 2004; now Boston College is making the same transition. And the Eagles loudly announced their arrival in December by squashing ACC old-timer North Carolina 37-24 in the Continental Tire Bowl in Charlotte.

Is that reason enough to declare Boston College a legit league title contender?

On the side of the hype: the bowl victory was BC's fifth in a row and gave the Eagles a 9-3 record -- their best since 1993, when they cost Notre Dame a national championship. O'Brien has said this is his most experienced team in nine years on Chestnut Hill. And with as many as five players considered potential high NFL draft picks, there is a lot of talent on hand, as well.

On the side of caution: BC has lost in consecutive years to ACC second-division school Wake Forest (9-14 the past two seasons), not to mention back-to-back routs by Syracuse (last winning season: 2001). The latter of the two whippings from the Orange cost the Eagles a BCS berth, which brings into question the team's ability to perform when the stakes are highest.

Perhaps that's why O'Brien said, "You don't want to be judging things on paper."

If BC can transfer what it has off paper and onto grass (real or artificial), this might be O'Brien's best team.

One thing the Eagles bring to the ACC is a smashmouth offensive reputation -- which is a departure from the speed-oriented style that defines much of the league. An offensive line laden with mastodons (three stand 6-foot-7 or taller, and all but one weigh at least 310 pounds) contributes mightily to that.

"They always seem to have those big old offensive linemen who kind of rumble right through you," Virginia Tech coach Frank Beamer said.

Under O'Brien, Boston College has won a lot of games in the trenches.

"That's been BC football," O'Brien said. "We've had tremendous offensive lines. That's our heritage. We've tried to keep that tradition up. I don't believe you're going to play touch football and throw it all over the place and win games."

Fair enough and true enough. But BC threw it pretty well and pretty often last year. The Eagles passed for 245 yards per game. The only ACC team to average more passing yards in 2004 was Miami (258).

This year, the passing duties fall to senior Quinton Porter, the 2003 starter who redshirted last year to make room for senior Paul Peterson. Porter was adequate in '03 but will have to upgrade his playmaking ability to replace Peterson, who had a knack for making big plays.

"Only time is going to tell," O'Brien said. "He has experience; he's played in difficult places in the Big East. We know he has ability, and we've got to maximize what he does best. If you can throw it when you want to throw it and run it when you want to run it, you'll be successful."

In an effort to get more explosiveness on the offensive side of the ball, O'Brien took a calculated risk and moved his best cover corner, Will Blackmon, to wide receiver. Blackmon, considered an NFL prospect at cornerback, took one for the team.

"I definitely had to evaluate myself," he said. "I already had invested three years at cornerback and it's a position that I have a future at. ... I realized what a difference I could make on offense. I put my future aside. I quit worrying about next April and worried about where we could be in January."

In August, it's still a work in progress. Blackmon caught just one pass for 3 yards in the Eagles' first scrimmage. But he also saw time at nickelback on defense and will be BC's primary return man on punts and kickoffs. Blackmon is hoping to be on the field "80 or 90" snaps per game.

He won't be the only two-way performer for the Eagles, either. Linebacker Brian Toal, the Big East Rookie of the Year in 2004, will play short-yardage tailback. O'Brien wants to use the 240-pounder as a battering ram in search of first downs and the goal line.

"It may only be three plays a game," O'Brien said. "But it'll be three pretty important plays."

As BC joins the ACC with an abundance of praise and hype this season, every play is important for the team. For once, all eyes are on the Eagles.