LOUISVILLE, Ky. -- Coaches are fond of saying the videotape never lies, and they're right. But there are times when it defies belief.

This is one of those times.

On a stormy August afternoon, Louisville Cardinals teammates Brian Brohm and Michael Bush are watching a rough and jumpy tape of the day they created football art. Most of the time, they're smiling and shaking their heads at their own exploits. 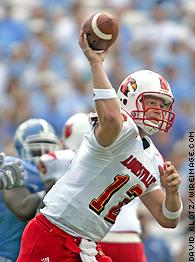 The videotape doesn't lie, but some of the plays they made bordered on the fictional.

Bush, watching Brohm throw the ball 40 yards in the air off one foot, hitting his receiver in the chest for an 85-yard touchdown pass: "It's obscene."

Brohm, watching Bush jump over a tackler and throw a touchdown pass with another defender hanging from his knees: "How'd you even throw that?"

It was a gray and gloomy December Saturday in 2002, the Kentucky Class 4A championship game. Years before they came together as starters and budding stars for a Louisville team ranked in virtually every top 15, Brohm and Bush played a high school game on a major-college level. The numbers were freakish.

Brohm completed 19 of 25 passes for 552 yards and seven touchdowns, averaging an outrageous 22 yards per attempt, and ran for 52 yards and a TD. Plug his numbers into a college efficiency rating and it would come out 353.9. (For comparison's sake, the top single-game efficiency mark in college last year for a quarterback who attempted 25 or more passes was 258.2, by Purdue's Kyle Orton.)

Bush threw for 468 yards and six touchdowns, ran for 116 yards and another TD, caught two passes for 24 yards, returned a punt and a kickoff, and made five solo tackles on defense. He played almost every snap.

The two multisport stars had been featured in Sports Illustrated earlier that fall -- Brohm was on the cover -- and they showed why on this December day.

"For two guys to have a performance like that, I'm not sure we'll ever see it again," said longtime Male coach Bob Redman.

Brohm kept lobbing precision-strike bombs for touchdowns over Male's press coverage, demoralizing Redman to the point that he told his one-way defensive players late in the third quarter, "I love you, great job, but your season's over. Sit down."

Trinity could not be stopped. Redman decided to onside kick after every score.

"That's not in any coaching manual, is it?" Redman said.

Bush, in his first year as a full-time quarterback, made fewer lightning-strike plays, but dropped jaws more often against a defense allowing just 6.1 points per game. He carried his team downfield with his arm and legs, as fundamentally sound tacklers pinged off his massive thighs like children. Not once all game did the first tackler take him down.

The game program that day listed Bush at 223 pounds, a number both players laughed at.

"C'mon," Brohm said to Bush. "What did you really weigh?"

"Two-fifty," Bush said with a smile.

Recalled Trinity coach Bob Beatty: "I saw him in those pants when we were warming up and said, 'My God, 220 my ass! He's pushing 260!'

"When I saw our kids bouncing off him, what do you say to a kid? 'Get up, baby. Because it's coming again.'"

It kept coming until the very end, when Bush's 47th and final pass, a 40-yard bomb to the end zone with one minute and 11 seconds left, was underthrown and intercepted. Nearly three years removed from the moment, Bush hung his head watching it on tape.

"I feel the same way now as I did then," he said glumly.

In the stands at Cardinal Stadium, a decrepit minor-league baseball park with faded artificial turf, one interested party was transfixed. 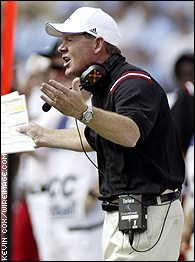 "That," said Bobby Petrino, "was amazing."

Petrino was the offensive coordinator at Auburn then, and was recruiting Bush hard. Within a few weeks, he would become the head coach at Louisville, replacing John L. Smith.

He might have wanted these guys at Auburn, but he had to have them at Louisville. Bush, a senior and the state's Mr. Football, was the first priority. Brohm, just a junior, was second.

Bush was also being pursued hard by Ohio State and a host of other top-shelf football schools. He'd played every position but line on the football field, and had been primarily a wide receiver the year before. Male's Redman, who has coached eight NFL players, including his son Chris, a quarterback, said he has never had anyone with comparable athletic gifts.

"No question about it," Redman said. "His versatility is unbelievable."

But there was only one position Michael Bush wanted to play in college: quarterback. Petrino promised him he could if he came to Louisville, and he got his man.

"If he was going to play quarterback, I wasn't going to come here and sit behind him," said Brohm, who was being ardently pursued by Notre Dame, Tennessee and dozens of others.

Bush saw some playing time at quarterback as a true freshman, but Stefan LeFors had established himself as the immovable starter. To get Bush on the field, Petrino convinced him to play other positions -- receiver, running back, kick returner, even dabbling in some defense.

He settled at running back. After playing little early in the season, Bush rolled up consecutive 100-yard rushing games late in the year and finished the season with 503 rushing yards and another 240 receiving.

But Bush saw that as a temporary solution. He still had his mind set on playing quarterback.

As it became clear that Louisville was in full pursuit of Brohm, Petrino made his pitch to Bush: Your future is at running back.

"I brought him and his dad in, and we watched some video," Petrino said. "I explained that I thought he has some special talent at running back."

"I was hot," he said. "I thought about transferring, had intentions on doing it. I was upset when he signed here. Nothing against him, but I knew I wouldn't be playing quarterback.

"I still think to this day, if I went to another school, I'd be a quarterback. But there's nothing like playing at home. I couldn't leave this place."

The hometown pull was a huge factor with Brohm, as well -- but it wasn't everything. After touring spring practices at some full-fledged football factories, Oscar Brohm told his youngest son, "The talent at Louisville is as good as any of these places." That statement is in the process of being vindicated.

Petrino somehow got his guys, keeping the nation's superpowers at bay and convincing them they could play together. With the two combatants on the same side, they helped the Cardinals to the best season in school history, an 11-1 romp in which they led the nation in scoring.

Brohm saw action in 11 games, spelling LeFors and throwing for 819 yards with six touchdowns and two interceptions. His prove-it moment came in a display of preternatural poise against Miami in a nationally televised Thursday night game. When LeFors went out with a concussion in the fourth quarter, Brohm stepped in and picked apart the Hurricanes' defense, driving the Cardinals 80 yards for the go-ahead score under immense pressure.

"He wasn't even nervous," said Louisville offensive tackle Travis Leffew. "I think he won a lot of us over in the Miami game."

Bush backed up NFL draft pick Eric Shelton at running back -- a 250-pounder following a 248-pounder, pulverizing defenses until they simply stopped tackling in the fourth quarter. With a novice's grasp on the position and still lacking true running back conditioning, Bush ran for 734 yards and seven touchdowns, with another 155 yards in receptions.

"I knew the plays, but sometimes I didn't know where to go," Bush said.

Last year, he leaned on LeFors' encyclopedic knowledge of the offense, often asking him what he was supposed to do in the huddle on a certain play. That didn't work so well when Brohm would step in for LeFors.

"Mike would ask me what to do and I was like, 'Uh, I think that's what you do,'" Brohm said. "I was just a freshman trying to learn the offense."

Brohm has the offense down cold now. (He has little choice, with big brother Jeff serving as his position coach.) Bush is in the best shape of his life -- an alleged 245 pounds -- but admits that he's still winging it, to a degree, at running back.

"I still don't know how to run, to this day," he said, adding that the coaches are working with him to develop a stiff arm. "All my stuff is just off-edge. But I feel like I'm a lot faster. If I get into the secondary, we'll see if I can take it on in."

Bush will get plenty of opportunities to take it on in. Backup Kolby Smith will get a healthy number of carries every game, but Bush has an opportunity to be a 1,200- to 1,500-yard rusher this year, plus catching passes and probably throwing a couple. (Reggie is not the only ultraversatile Bush in college football.)

Brohm, who will not have to give up a possession or more per game the way LeFors did last year, easily could throw for 3,000-plus yards. He has a three veteran receivers -- Montrell Jones, Joshua Tinch and Broderick Clark -- plus a potential breakthrough star in 6-foot-6 redshirt freshman Mario Urrutia, who has been tearing up fall camp.