The arguments on the road last season were enough to pierce the hotel room walls.

Truth is those good-natured sparring sessions were about the only time Patrick Cobbs and Jamario Thomas have ever quarreled over anything. 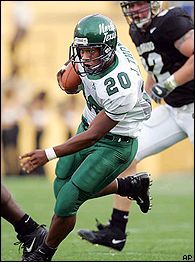 "I'll be a better player because I know he's there pushing me," Cobbs says of Thomas.

"He's the guy who taught me the ropes," Thomas says of Cobbs.

Who's going to start? Cobbs says he could care less. Ditto for Thomas. But there is one problem.
Before the first road game, they have to settle their television viewing differences.

You see, they're roommates on the road. And on game day, Cobbs likes to watch other football games. Thomas prefers the Cartoon Network.

"I tried to get him to play rock, paper and scissors with me to see who gets it, and he wouldn't do it," Thomas jokes.

Counters Cobbs: "Last year, I let him get away with a lot because he was playing and I wasn't. Before that, I watched everything I wanted to watch.

"I guess we'll rotate every other game this year."

As far as who gets first dibs on the television set, that is.

When it comes to divvying up the carries, North Texas head coach Darrell Dickey says that situation will sort itself out.
The North Texas staff has studied other programs to see how they've used two marquee backs in the same offense. One of those was Auburn with Carnell Williams and Ronnie Brown a year ago.

"We've never had a luxury like this, but we're glad we have it," Dickey said. "We're looking at it as a positive. They're both great kids with great character and are both very unselfish. Whether we play them both at the same time sometimes, play one while we're giving the other one a break or however it plays out, we'll find a way to use them both. I think they're actually looking forward to sharing the workload so they don't get beat up quite as much as they have in the past."

Cobbs will be a fifth-year senior after redshirting last season. He sprained ligaments in his left knee during the Mean Green's second game and was done for the season. That's after churning out four 200-yard games in 2003 and rushing for 19 touchdowns.

In his first start as Cobbs' replacement, Thomas rushed for a North Texas freshman record 247 yards against Colorado.

"The first thing on my mind was that I kept telling myself, 'It's just a football game, nothing else, so go out there and have fun,'" Thomas remembered. "Pat also talked to me, and that really motivated me. We've always been in this thing together."

Thomas, who doubles as a sprinter on the track team in the spring, finished the season with 1,801 yards, one of only three freshmen in NCAA history to rush for more than 1,800 yards. He reached the 1,000-yard mark by the seventh game.

"I knew how good he was," Cobbs said. "He just needed to learn the system. He's a great athlete and has all the tools to do anything he wants at the running back position. He just got that chance earlier than everyone expected and made the most of it."

One of the reasons Thomas chose North Texas was because of its program for students with dyslexia. He said he has struggled with the learning disorder since he was a young child.

"They have a very good program here for [dyslexia], one of the best," Thomas said. "I came up here on my visit, and everybody was so nice. I knew this is where I needed to be."

As fate would have it, Cobbs was Thomas' host on his recruiting visit. Little did they know they were about to carve out a little slice of history.
According to Eric Capper, North Texas' associate athletics director for media relations, nobody has had two different players lead the country in rushing in back-to-back seasons since 1970, when the NCAA went to yards-per-game as the barometer to determine the national rushing champion.

As a way to promote Cobbs and Thomas, North Texas unveiled a huge "Back to Back" banner on the side of its stadium where Interstates 35E and 35W come together in Denton.

"Where those two interstates merge is right at our stadium," Capper said. "We got some information from the highway department, and that intersection gets about 45,000 cars every day."

In other words, it should get plenty of hits.

"The best thing about these two kids is that they're all about winning," said Dickey, whose Mean Green have won the last four Sun Belt Conference championships and 25 straight conference games.
"It's not a situation where you're going to see them sitting there counting their carries during the course of a game. The workload is going to balance out. If one's tired, we'll put the other one in. If one of them has the hot hand, we'll leave him in longer. The other thing we've told them is that the more productive you are, the more carries there's going to be for both of you."

One of the headaches for opposing defensive coordinators is that the players have different styles. The 5-foot-9, 200-pound Cobbs, who says his knee is 100 percent, is more of a between-the-tackles bruiser. The 5-11, 195-pound Thomas is more of a speed guy with some serious shake.

Barring an injury, the reality is that staking a claim to a third straight individual rushing title is probably out of the question. At least, not when they're splitting carries.
But that doesn't mean the Mean Green can't lead the country in rushing. Between them, Cobbs and Thomas combined for 3,537 yards and 36 touchdowns over the past two seasons.

"We'll have more energy and will be closer to 100 percent on every play," Thomas said. "It might even give us both a chance to play special teams."

The only streak Cobbs is consumed with is winning a fifth straight Sun Belt Conference crown.
"I really don't set any personal goals," Cobbs said. "My goal is to do whatever I can to help the team win."

By all accounts, sharing the carries won't be a problem this season in Denton. But sharing the remote? That's a different story.