Sometimes it's better to be slapped in the face than patted on the back. Dusty Dvoracek thinks that's the case with the 2005 Oklahoma Sooners, who uncharacteristically find themselves as underdogs instead of underachievers.


"Since I've been here, and this is my fifth year, everybody's picked us to win the national championship or at least be there at the end," the Sooners defensive tackle said. "We haven't won one yet."


And they're not favored to win one this year, not with a young team that must rebuild at quarterback, offensive line, receiver and defense, and which features 23 freshmen and sophomores on the latest two-deep. In fact, the media installed the Sooners' current whipping boy, Texas, as the Big 12 favorite.


Of course, Texas was also the favorite to win in 2000, when the Sooners were breaking in new offensive linemen, new receivers and several key defenders. All the Sooners did that year was wax the Longhorns 63-14, starting the current five-game winning streak over their rivals. 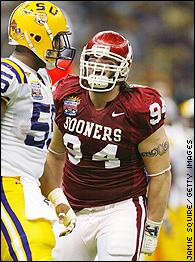 "Probably our youngest and most inexperienced team and least talented team in the last five years was our 2000 national championship team," he said.

"That lets you know that if you stay hungry, experience is great but not a necessity," Dvoracek said.

After coming from a 2000 preseason ranking of No. 20 in the ESPN/USA Today poll to a national championship victory over Florida State in the Orange Bowl, the Sooners were ranked no lower than third at the start of the next four seasons.

In '01, they lost to Nebraska and were upset by rival Oklahoma State. In 2002, Texas A&M pulled a midseason upset and OSU won again. In 2003, while many were debating whether this was the best Sooners team of all time, OU was stunned by heavy underdog Kansas State in the Big 12 title game, then edged by LSU in the Sugar Bowl national title game.

Last year, the Sooners took an unbeaten record into another national title game, only to be embarrassed 55-19 by Southern California. That was followed by the exodus of 15 starters, five of whom were taken in the first two rounds of the NFL draft. The list of the departed included five All-Americans -- tackle Jamaal Brown, kick returner Antonio Perkins, center Vince Carter, receiver Mark Clayton and end Dan Cody -- as well as 2003 Heisman Trophy-winning quarterback Jason White.

"Maybe we just have to dig deeper," Dvoracek said. "Two years ago, people were saying we were the best ever. We let them pat us on the back. We weren't as hungry."

This season, the Sooners have no choice but to be hungry. Their offense will be built around halfback Adrian Peterson, who ran for 1,925 yards last season, an NCAA freshman record and an OU school mark. But Peterson is one of the few proven commodities on offense, aside from receiver Travis Wilson and left tackle Davin Joseph.

Peterson, being brought along carefully in the preseason in deference to his surgically repaired shoulder and a tight hamstring, will be the main focus of defenses, at least until a solid, efficient quarterback emerges from a two-man race between Rhett Bomar and Paul Thompson.

Neither played last year. Thompson redshirted as Tommy Grady, who has since asked for a scholarship release, backed up White. Through mid-August, neither had done enough to pull ahead of the other, though that's not fully their fault. In an Aug. 17 scrimmage, neither had much time to drop back in the face of the pass rush, and each completed barely 50 percent of his passes.

That left Stoops and offensive coordinator Chuck Long far from making a choice. Either player would lend a running threat the Sooners haven't had for a while. Thompson, a junior, has experience. Redshirt freshman Bomar has a reputation as a more polished passer, though he's seen as a risk taker.

"I try to make my reads, put it in there," Bomar said. "I'm sure they want someone who doesn't make mistakes."

Defensively, the Sooners must replace seven starters, but the concern is felt most in the secondary. OU had only eight interceptions last season, 95th in the country, and is trying to replace three starters. Defensive coordinator Brent Venables, looking to avoid the breakdowns that plagued the pass defense last year, is junking the complicated coverage system employed by Bo Pelini last season in favor of the simpler style installed by previous co-coordinator Mike Stoops.

OU opens the season Sept. 3 at home against Texas Christian. Until then, the Sooners toil in Norman, where T-shirts that read "Pay the Price. Rose Bowl" are a common sight as they rebuild.

"Reload," Dvoracek corrects. "We're thinking of it as a reloading year."

Mark Wangrin covers the Big 12 for the San Antonio Express-News.