Maybe it's fitting the strong-armed quarterback who is expected to bring life to Nebraska's West Coast offense shares a name with the 12th president of the United States. Zachary Taylor died 155 years ago, or roughly about the time the Cornhuskers last successfully ran something besides the I-option attack.

This Zachary Taylor isn't a throwback sort. He goes by Zac, hails from Norman, Okla., instead of post-colonial Virginia and professes zero knowledge of his presidential namesake.

He knows slightly more about Cornhusker history. Taylor was raised as an Oklahoma fan but with a healthy respect for Nebraska.

He was vaguely aware of Jerry Tagge, who helped the Huskers get things together the last time they switched from the option to a passing attack.

That was in 1968. Two years later, Tagge led the Cornhuskers to the first of two consecutive national titles.

Nebraska fans don't expect Taylor to lead the Cornhuskers to the national title -- at least not this year -- but they are anxiously awaiting an improvement over last season, a 5-6 downer that ended the Cornhuskers' NCAA-record streak of 35 bowl appearances.

That left a wide-open door for Taylor, a late addition to the Cornhuskers' 2005 recruiting class. Nebraska coaches had already secured a commitment from prep quarterback Harrison Beck in part by assuring him they wouldn't pursue another quarterback. But after realizing the complicated West Coast terminology was too daunting for a true freshman to master, they pursued Taylor -- but only after first getting Beck's blessing.

Taylor was a good fit, having been schooled in the fundamentals of a three- and five-step passing attack at Wake Forest and Butler Community College. 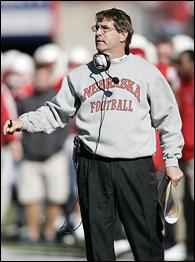 It was an unlikely choice for Taylor, considering Nebraska's once-favored offensive style and that his father Sherwood played defensive back for Oklahoma from 1977-79 and named his only son after Sooners teammate Zach Henderson.

"If you had asked me to rate all 117 teams on where I wanted to play three years ago, Nebraska would have been at the bottom," Taylor said.

But Bill Callahan's switch to a ball-control passing attack intrigued Taylor, and he signed with Nebraska. He also signed on for a crash course in terminology, forcing himself to digest all aspects of the 7-pound, 6-ounce playbook. (He and Beck, impressed with its size, actually weighed it.)

Senior Mark LeFlore, who came to Nebraska when the complexity of the passing attack likely warranted a four-page pamphlet, testified to the new book's depth.

"They have 10 different ways to call one play," LeFlore said Aug. 17, a day before being lost indefinitely with a knee injury. "That can be overwhelming to someone new."

Taylor has gobbled it up.

"He's a mature kid, very stable, very bright," Nebraska offensive coordinator Jay Norvell said. "He throws for a high percentage in practice and in this system, when you're getting completions, the offense is functioning. He gives us credibility in the passing game."

Nebraska's receiving corps will be led by tight end Matt Herian and a collection of wide receivers led by Terrence Nunn, Grant Mulkey and Isaiah Fluellen, who combined for 44 catches last fall. Injuries to Herian, who may not return until October from a broken leg suffered against Missouri last fall, and Fluellen (hamstring) have cost Taylor and his targets needed reps.

Said LeFlore, "The greatest thing about Zac is that he gives you a chance to make a play. He's got great pocket presence. He's a special player."

Norvell has also been pleased with the progress of Beck, a consensus national top-five prep quarterback prospect out of Clearwater (Fla.) Countryside, who picked Nebraska over Florida, Florida State and Miami -- and who was so eager to learn he spent spring break in blustery Lincoln watching practices.

"He's way far ahead of most freshmen in the understanding of the offense," Norvell said. "He's on schedule to be a great player at Nebraska."

Norvell said that when Nebraska signed Beck, he expected he'd play this season. But with Taylor's development -- and the longer-term future of the passing attack to consider -- Beck may redshirt. That became more likely Aug. 17, when redshirt freshman Joe Ganz moved past Beck into the No. 2 spot on the depth chart, all but assuring Taylor the first shot at making a name for himself.

Historical buffs may note it's a bad omen to share a name with the former president, seeing as how he died five days after eating a tainted snack of cherries and milk at an 1850 Independence Day celebration. Or they could say it's a good one, considering the nickname of the hardscrabble former Army general, who was ready to hold the Union together through force rather than compromise. They called him "Old Rough and Ready."

"I guess I fit that description," Zac Taylor says.

In Lincoln, Taylor's working on smoothing out the rough spots. Nebraska fans, ready to revive past glories, are praying he's ready.

Mark Wangrin covers the Big 12 for the San Antonio Express-News.