Hang around locker rooms long enough and you can develop a sort of jock ESP -- an indefinable ability to identify a superstar athlete just from the way he carries himself. At Ohio State, the jock ESP activated when Ted Ginn hit campus.

"As you watched him walk around, you could tell he has an unbelievable amount of athletic talent," center Nick Mangold said. "You see him walking in the locker room -- I don't know what it is, a look, a walking style -- you could tell that guy was something special."

Said coach Jim Tressel: "He has a humble way to have presence. I'm not sure he touches the ground when he walks."

Ginn laughs at those descriptions, but says he did arrive in Columbus last year intent on making an impression. 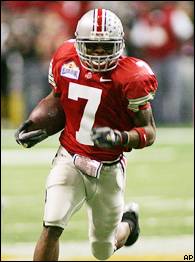 "I just wanted to come in and show guys that I might be small, but I can play ball," the 6-foot, 175-pounder said. "I walked in with confidence. I didn't walk in like a freshman, thinking I'd be redshirted."

But this was more than just walking the walk. If Mangold thought Teddy Ballgame looked good strolling around the locker room, wait until he saw him run on a football field.

As a freshman, Ginn got the ball 59 times and transported it to the end zone on eight of those occasions -- roughly one touchdown for every seven touches. For some perspective, consider that when Barry Sanders was setting the I-A season record of 39 touchdowns in 1989, he reached pay dirt once every 10 touches.

It will be next to impossible for Ginn to maintain such a preposterous percentage of touchdowns-to-touches, but the Buckeyes will certainly give him every opportunity to try. Because if there is a legitimate threat to Reggie Bush's title of scariest player in college football, it's No. 7 for Ohio State.

Six of Ginn's eight TDs came on plays longer than 50 yards. His four punt-return TDs (in just 15 returns) averaged 69 yards in length. The kid who has been timed at 10.5 seconds in the 100 meters can outrun anyone, from anywhere in the stadium.

"You see a lot of fast guys," said Columbus Dispatch columnist Todd Jones, who spent several years covering the NFL for the Cincinnati Post. "But you see him and say, 'Damn, he's fast!' He has that different type of speed. This was like that Deion [Sanders] speed."

What excites Ohio State fans is the chance to see that speed for a full season.

Last year he arrived as the USA Today national Defensive Player of the Year after a gilded two-way career playing for his dad, Ted Sr., at Glenville High School in Cleveland. But it took Ginn five games to make an impact. He came in as a cornerback, then switched to offense and slowly absorbed offensive coordinator Jim Bollman's system.

"It was a process, and you've got to let the process go," Ginn said. "You've got to learn the plays, know the playbook, and the players had to be confident with you in the game. Sometimes I did feel like I could do it [play earlier], and sometimes I felt I wasn't ready."

Ginn might have struggled with the playbook, but there was no hiding his athletic brilliance. That was bursting forth as far back as August camp, playing against the starting defense.

"We had a few times when he'd catch the ball in the flat and reverse it, run all over the field juking guys," said safety Nate Salley. "We watched that and said, 'All right, we've got something here.' He was out there having fun, showing what he's got. We knew his time would come."

It came in an otherwise dispiriting 24-13 home loss to Wisconsin. Ginn scored the Buckeyes' only touchdown on a 65-yard punt return in the first quarter.

"Man, it was like the greatest thing in the world," Ginn said of that return. "There were 111,000 [fans] there, Big Ten game. It was a feeling you'll probably never, ever feel again. Probably not until your first touchdown in the NFL."

There's that confidence again. But as good as that feeling was, he never touched the ball from scrimmage that day against Wisconsin. That agitated Ohio State fans who saw Ginn as a speedy solution to the team's offensive problems.

The kid didn't necessarily see it the same way.

"I don't want to get out there and not know nothing," he said. "You mess up, and that's when the fans go, 'He shouldn't have been in.'"

Finally, at 3-3, the Buckeyes turned Ginn loose within the offense. He caught a 59-yard touchdown bomb against Indiana. He ran the ball twice and caught a couple of passes against Penn State and also returned another punt for six. In the final four games against Michigan State, Purdue, Michigan and the bowl game against Oklahoma State, Ginn was all over the place.

Ever since that late-season explosion, the question has followed Tressel like a lost dog: How often are you going to get Ginn the ball? Ask him these days and you get the thin smile of a man who hears it in his sleep.

"He has been our primary punt returner," Tressel said. "He'll get an opportunity on kickoff returns. Offensively, his evolution, as far as the number of touches increased as the year went last year, and that remained consistent in the spring. Defensively, he may even get a touch or two on a pass breakup. (Although Ginn said last week that he has played no defense in fall camp.)

"We've got to be careful. Sometimes you get excited because he can do so many things, but it's a tough, physical game."

Translation: Buckeye Nation might want to see him handle the ball on every other snap, but Ginn may not have the physique to take 20 hits every Big Ten game. So it will be up to Bollman to pick his spots offensively and up to opponents to decide whether they feel like playing Russian Roulette with their special teams and kicking to Teddy Ballgame.

Ginn, for his part, isn't obsessing about when he'll get the ball or how often. He's taking a more existential approach.

Nobody in college football gets there faster. Ted Ginn might look good when he walks -- feet on the ground or not -- but he looks like a superstar when he runs.