He revealed residual scars from his ill-fated Notre Dame tenure and provided detailed, trenchant position-by-position analysis of the challenges the Huskies face coming off the worst season in team history.

And then everyone woke up. The purple hippo singing Coldplay tunes felt more real in that dream sequence than Willingham's provocatively opening up.

On his third job in five years, Willingham has bounced back and forth across the country and remains his steady, stolid self, though he insists he's juiced about his return to the West Coast.

"If I jumped out of my chair here, it would surprise most of you and that would be an unusual reaction," he said of his excitement. 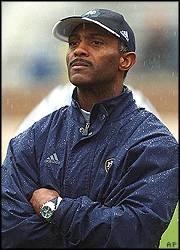 Willingham has been endlessly asked about two things since he was hired: (1) What's the pecking order among the four quarterbacks vying for the starting job? (2) With time for reflection, what are his feelings on his treatment at Notre Dame, where he was unceremoniously fired after only three seasons?

To the first question, Willingham reveals nothing. While the general feeling is junior Isaiah Stanback leads the foursome competing for the job, Willingham has intimated that he might not announce a starter before the Sept. 3 opener against Air Force.

And to what he termed "the Notre Dame episode," he said: "I won't touch that. I don't talk about it. It's a great place. A wonderful place. I did not do all I wanted to do."

Washington fans are taking a wait-and-see attitude with their new coach, particularly after a 30 percent increase in ticket prices. A program that just a few years ago boasted well over 60,000 season-ticket holders is now below 47,000. The first game of the Willingham era will be played at Qwest Field -- the Seattle Seahawks' home -- but fewer than 20,000 tickets have been sold, despite a recent steep discount for the area's significant military community.

Moreover, the team is operating under a veil of secrecy, with practices closed to reporters and little information being provided by Willingham or offensive coordinator Tim Lappano about what the new offense will look like. When asked about his offensive philosophy Willingham, in typical fashion, announced it was: "Win."

Adopting that scheme might take some time. The Huskies went 1-10 last year. They led the nation in turnovers with 42 (seven more than the second worst team, Rutgers), ranked last in scoring offense (14 points per game) and ranked 103rd in total offense (311 yards per game).

Despite 19 returning starters, the Huskies, for the first time, were picked to finish last in the Pac-10 by conference media.

What does Willingham think of his charges?

"I see some good things and some bad things," he said.

The most insight Willingham is willing to provide is an observation that the offensive line and linebackers appear to be team strengths.
Of course, there are other ways to probe for information, such as asking quirky questions.

For example, his mustache. Willingham shaved it during the spring, as he did once at Stanford and later at Notre Dame, but it has returned for the fall.

For a coach who insists that his players be well groomed and sport short haircuts, this has to mean something.

"It just depends on what I think is the right thing to do at that time," he said of his mustache. "If I feel like I need to communicate something to our team, I might or might not [shave]."

Willingham's style of communicating also takes some getting used to. He often responds to mundane football questions with seemingly unrelated aphorisms that might be found in the latest self-help tome.

Asked if preparing for the season-opener against Air Force and its option offense could be "frustrating" because the Falcons' scheme is so rare these days, he said: "You have to forgive me because there are certain words that people mention that I fixate on. I don't get 'frustrated.' If we can't change it, don't worry about it. If we can, good."

Asked about locker-room problems and factions within the team over the past few years, he acts as though he's never heard of such a thing.

"Gosh, you mention those groups but, excuse my facial expression, it's kind of alien to me. I don't know anything to talk about but the team. I don't know another language," he said. "I haven't worried or concerned myself about factions or groupings or cliques. My language has only been team, team, team, team. Hopefully they will reflect my approach about what we're about."

Yet after more than two years of on- and off-field problems, including the Rick Neuheisel gambling accusations and subsequent lawsuit, and a tumultuous two years under Keith Gilbertson, the players apparently have had enough of colorful.

Said center Brad Vanneman: "It's a different style of leadership and it's reshaping a lot of people who kind of had the wrong attitude. I feel it's something this program needed."

Vanneman noted that a couple of players missed classes this spring. After they failed to heed a warning from Willingham and played hooky again, the entire team met on Friday, Saturday and Sunday mornings at 6 a.m. for special conditioning sessions.

"And he did a lot of stuff with us -- you know, he's in a lot better shape than a lot of us," Vanneman said. "It showed his commitment. He's not a person to be taken lightly. With his words ... he lives by everything he says."

His words also appear to be working on the recruiting trail. Four highly rated players have verbally committed to the Huskies, including quarterback Jake Locker (Ferndale, Wash.), an athletic passer with leadership skills reminiscent of Marques Tuiasosopo.

Willingham might not be flashy or quotable. His redundant quotes about working hard and getting better and playing one game at a time may be boring. But he's not going to change.