Here's a way to appear urbane and worldly when the topic of the best running back in college football inevitably comes up at the next cocktail party, square dance or secret society gathering.

Someone surely will volunteer the names of Oklahoma's Adrian Peterson or perhaps USC's Reggie Bush. That's when you should assume a superior look -- a pursing of the lips is always good -- and interject a "tut tut."

Then say this: "[California's sophomore running back] Marshawn Lynch may be the best all-around football player I've ever seen."

Make sure you accurately source the comment. It's a verbatim quote from the lips of Cal coach Jeff Tedford, who may be accused of being biased but isn't known for gushing hyperbole. 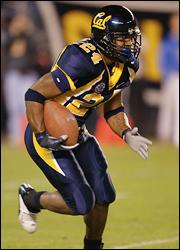 No team in the nation is more excited about losing a 2,000-yard rusher than the Bears. With J.J. Arrington (who should have been a Heisman Trophy finalist last year) off to the NFL, Lynch inherits the starting tailback spot behind one of the nation's best offensive lines. It's a crew that features four returning starters and includes two first-team All-Pac-10 blockers, center Marvin Philip and tackle Ryan O'Callaghan.

Combine that with inexperience at quarterback and receiver, and it figures that Lynch will get a lot of carries. He could put up the sort of numbers that raise eyebrows from Heisman voters.

As a true freshman backup, Lynch rushed for 628 yards and scored eight touchdowns. Oh, and he averaged 8.8 yards per carry, posting runs of 40 or more yards in four games.

Lynch combines outstanding speed, vision and balance with 215 powerful pounds on his 5-foot-11 frame. Like Peterson and unlike Bush, he complements big-play ability with proficiency between the tackles.

Like Bush and unlike Peterson, Lynch also is an outstanding receiver. He caught 19 passes for 147 yards with two touchdowns in 2004, numbers that likely will double this fall. Lynch often will line up as a receiver or go in motion out of the backfield, assuming a Bush-like role in the passing game that makes defensive coordinators shake their fists at the heavens.

So let the debate begin. Or at least advance beyond a, "Mar-who Lynch?" Tedford, for one, believes the only thing that prevented Lynch from having a freshman season like Peterson's was the presence of Arrington.

"I think they are very comparable," Tedford said. "I have no doubt he can be every bit as good -- if not better -- than Adrian Peterson."

Peterson and Lynch did play against a common defense last year: USC. Arrington had 21 carries for 112 yards and Lynch added eight totes for 36 yards, while the Trojans held Peterson to 82 yards on 25 carries.

Considering how lauded the Sooners' offensive line was last year, that probably speaks to how good the Bears should be up-front this year. That boosts the theory that Lynch will be a breakout player this fall.

While he didn't receive the recruiting hype Peterson and Bush did when they were lighting up high-school scoreboards, Lynch was widely regarded as one of the nation's top 10 tailbacks and the top prep back on the West Coast in 2003.

Tedford offered him a scholarship before Lynch's senior year.

Tedford isn't trying to generate hype or act as Lynch's publicist. In fact, in anticipation of a media swarm overwhelming the laconic Lynch, he's limited his future interviews exclusively to Tuesdays.

Of course, not everyone is that impressed with Lynch or interested in comparing him to Peterson. Leading that school of thought is ... Lynch.

Heck, Lynch, a native of Oakland, Calif., said he "doesn't get into that kind of stuff" when asked about All-American or Heisman consideration. He said he's never seen Peterson play because he doesn't watch college football on television.

So the potentially best running back in college football isn't a fan of his own sport.

"I really don't pay much attention to football when I'm not practicing or playing it," said Lynch, who lists his hobbies as fishing and reading. "I don't really keep up with football, period."

Some things do catch his fancy. He's excited about switching to jersey No. 10 -- his high school number -- after wearing 24 last year. The new jersey also puts him in sequence with two Bears teammates who double as his cousins, freshman linebacker Virdell Larkins (No. 9) and sophomore receiver Robert Jordan (No. 11).

Lynch insists there's no reason Cal should drop off from its 10-2 finish last year -- the program's best record in 54 years -- despite considerable personnel losses, particularly on defense. But ask him about his part in making sure that doesn't happen, and he talks about the Bears depth at running back.

He's not alone, at least until, oh, mid-September.

That's the great thing about dropping the Lynch-bomb on folks who don't know about him yet. It's just a matter of time until a glorious "I told you so" moment presents itself.