<
>
Forde: Starting Over
Florida Gators
16yPat Forde
Hall of Fame voting winners and losers: David Ortiz gets in, who else got good (or bad) news?
Boston Red Sox
8hESPN.com
What makes David Ortiz a Hall of Famer? Stories from those who know him best
Boston Red Sox
8hESPN.com
Ortiz accepts Hall call; Bonds, Clemens shut out
Philadelphia Phillies
8hBradford Doolittle
AB to pursue legal action against Buccaneers
Tampa Bay Buccaneers
4hJenna Laine
Clips do it again, rally from 35 down to stun Wiz
LA Clippers
2hOhm Youngmisuk
Saints' Payton steps away, unsure of what's next
New Orleans Saints
12hMike Triplett
Sources: Louisville in talks to separate with Mack
Louisville Cardinals
7hJeff Borzello and Pete Thamel
Rodgers hints his decision likely by tag deadline
Green Bay Packers
10hRob Demovsky
Auburn survives scare in 1st game ever as No. 1
Auburn Tigers
3h
Swiatek wins 3-hour quarterfinal as temps hit 97
5h
Sean Payton put the New Orleans Saints in a 'better' place, but what's next?
New Orleans Saints
5hMike Triplett
Why Sean Payton's shadow will loom over Cowboys' Mike McCarthy
Dallas Cowboys
8hTodd Archer
32 NFL teams, 32 big free-agent decisions: Which players will return to their 2021 team?
Green Bay Packers
19hNFL Nation
Dustin Johnson, Justin Thomas and Rory McIlroy all looking for different levels of better
19hMark Schlabach
How to watch the PGA Tour's Farmers Insurance Open this Wednesday-Saturday on ESPN+
19hESPN.com
'Sirens are not unusual at AFCON': Inside the stadium disaster in Cameroon
7hEd Dove
Is it dribbling or is it showboating? And where do you draw the line?
15hJulien Laurens
USMNT favors frigid forecast, but will it yield home-field advantage?
14hJeff Carlisle
No Azteca fans? No Flores call-up? Mexico faces tough task ahead of crucial World Cup qualifiers
11hCesar Hernandez
'It's not about the talent': Patrick Ewing and the battle to avoid another lost season at Georgetown
Georgetown Hoyas
19hMyron Medcalf
Do the New York Giants need an experienced head coach to pair with rookie GM?
New York Giants
20hJordan Raanan
Will Jon Jones be the next challenger for the UFC heavyweight championship?﻿
2dMarc Raimondi
MLB lockout latest: What can we expect from this week's negotiations?
10hJeff Passan and Jesse Rogers
Time will tell if Villa's gamble on Coutinho pays off for both sides
21hIan Darke
Balotelli's back! What has Italy striker been up to during international exile?
18hChris Wright
Transfer Talk: Tottenham's Dele Alli wanted by five clubs in January window
8hLuke Thrower
Which players could move before the January window closes?
2dMark Ogden
Breaking down the 2022 girls' McDonald's All American basketball recruits
Georgia Lady Bulldogs
11hShane Laflin
Transgender swimmer Lia Thomas stays the course
3dKatie Barnes
Aug 25, 2005

Yet somehow, they've arrived at roughly the same place in 2005: starting SEC quarterbacks who are starting anew, with two tons of expectations riding on their respective shoulder pads.

Leak, the nation's No.1 prep prospect in 2003, has started 21 games in two years at Florida -- and seen the coach who recruited him get fired. Now he is being plugged into Urban Meyer's spread offense, a vehicle some believe will vault Leak into the same breath with USC's Matt Leinart on the list of America's best college QBs. But the SEC's coaches don't even consider him the best in their conference, surprisingly voting Vanderbilt's Jay Cutler to the preseason all-SEC first team.

Shockley, a fifth-year senior, has yet to start a game at Georgia. He's patiently held the clipboard while backing up David Greene, merely the NCAA all-time winningest starter (42 career victories) and the SEC all-time leader in passing yards and total offense. Shockley will have a talented line in front of him and three proven backs behind him, but Bulldogs fans are waiting to see how No. 3 does in the middle of it all.

If they both come through, their Cocktail Party meeting in Jacksonville on Oct. 29 will have America's attention. It will be Leak vs. Shockley in a game with national title implications.

If they both come through. There's a lot of football to be played before then, and a lot of proving for the quarterbacks to do.

Answering The Critics
The Golden Child will not admit it was a slap in the face. It wouldn't be Chris Leak's style.

The less-than-subtle message: a number of SEC coaches must think that Leak is oh-ver-ra-ted.

But you'd sooner get T.O. to take the high road than get Leak to take the low road. He's not going to fire back, complain about being disrespected, or take a swipe at the guy voted ahead of him.

"The only person I'm trying to prove anything to is myself," Leak said. "I'm just trying to be the hardest worker I can be. ... I don't pay attention to those things. I just want my team to be the best in college football."

Considering how much time Leak has spent being labeled first-team All-Everything, this development might not be a bad thing.

"I think I'd rather be in that situation," Florida offensive coordinator Dan Mullen said. "Now, he needs to go out and show people what he can really do. I'd rather be there than, 'Hey, aren't you supposed to be all-SEC?'"

Leak not only has greatness projected upon him because of his high-school rep, but because of the offense he now runs. His new head coach stressed at the SEC media days, "It's not Urban Meyer's offense, it's Chris Leak's offense." And clearly, people expect to see a better Leak today than they saw for two years under Ron Zook.

"When Coach Meyer came in and said he was going to build the offense around me and what we do best, that gave me a lot of confidence," Leak said.

In a roundabout way, he's following the footsteps of Alex Smith, who ran Meyer's spread offense so flawlessly last year at Utah, he was a Heisman Trophy finalist and the No. 1 pick in the NFL draft. Meyer describes both as "high-character human beings," but Mullen -- who was the quarterbacks coach at Utah -- sees some subtle, but significant on-field differences between the two.

For starters, he's amused at the questions about whether Leak can run the option out of the shotgun with the same productivity as Smith. Last year Smith ran the ball for 631 yards and 10 touchdowns, but he was hardly the second coming of Michael Vick. Leak, who has rarely run unless flushed from the pocket by pass rush, apparently has better wheels than he's shown.

"Chris has got quick feet, he's got a burst. He has that athletic ability, he's just never been asked to use it."

Mullen has few concerns about the smallish (6-foot, 205) Leak's taking shots once out of the pocket. Smith was taller but didn't weigh much more than Leak, and he held up fine.

We'll see how Leak holds up under an increased physical demand, as well as an increased mental load. He's the leader of an offense that's proven to work, which makes him the leading man at a program hungry to reprise the Spurrier era glory days.

'We want to compete for the national championship," Leak said. "Anything less than that is short of what being a Florida Gator is all about."

Dawg Day Afternoon
When D.J. Shockley got a quiet minute this summer, the same thing kept happening. His mind kept fast-forwarding to what it will be like on Sept. 3, when he finally steps between the hedges as the Georgia starting quarterback. 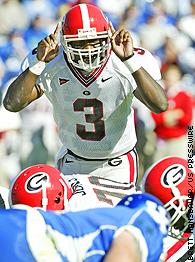 "I've looked forward to it so many times, I can't even count," Shockley said. "Waking up that Saturday morning, walking through the Dawg Walk [to the stadium] -- each time I think about it, it brings a chill to me."

The fact that Shockley sat chilly as a second stringer is remarkable in modern football times. Big-time recruits simply don't take a back seat for four years -- but D.J. did.

"Every athlete coming out of high school that was pretty good never thinks it would take four or five years to get your starting nod," Shockley said. "But it's been good. I've learned a lot and we've won a lot of games. I think this year will be the payoff."

Shockley was considered one of the top quarterbacks in the country while playing for his dad, Don, at North Clayton High School in College Park, Ga. When he signed on with Mark Richt, visions of Heisman winner Charlie Ward -- whom Richt coached as an assistant at Florida State -- danced in Georgia fans' heads.

Then, while Shockley redshirted his first year, David Greene blew up. While he was setting records and becoming a third-round draft pick, Shockley was doing cameo duty as a change-of-pace QB. He was never able to move to the top of the depth chart.

Best he could do was to swallow his ego and push his good friend Greene diligently in practice.

"Our relationship was the best thing we had going," Shockley said. "We were very competitive and both wanted to win every drill, but we had so much respect for each other on and off the field."

He thought about transferring earlier in his career, perhaps to an ACC school such as Maryland, North Carolina or Florida State, but never let it become a public issue. No wonder Richt said Shockley is "probably the most respected guy we have on the team."

An unselfish attitude has earned Shockley the Georgia fans' respect. Now he has to earn their trust as a winning QB.

Nobody doubts his ability to shred a defense by scrambling. ("Shockley is the best athlete I've ever seen," said All-America guard Max Jean-Gilles. "His feet are so quick.") The doubts will increase when the opposition jams everyone but the equipment managers into the box to stop what should be a powerful Bulldogs running game.

Can Shockley beat defenses with his arm?

Watch and see, he says.

"I want people to know that, hey, this guy can run, but he can also hurt you standing in the pocket," Shockley said.

Richt says he'll keep the offense largely the same as it was under Greene. There will be a few more plays in the game plan to take advantage of Shockley's athleticism, but no sweeping changes.

"Once he settles down into his normal game, I think we're all going to be very pleased," Richt said.

Few people in America will be as pleased on Sept. 3 as D.J. Shockley, starting quarterback.

Living Up To Expectations
It's ironic that two players with the credentials, talents and class of Leak and Shockley are being questioned. But they are. That's life in the SEC.