One thing you have to know about LSU fans: they'll find the party, no matter where it is. And if the party is attached to a ball game of some sort, all the better.

Which is why a sizable number of purple-and-gold-clad Tigers fans go to Omaha every year for the College World Series, even when LSU doesn't make the field. The CWS is a party attached to a ball game, so there they are. Laissez les bon temps roulez.

This year was one of those years when Tigers backers showed up without their team. One fan, wearing LSU-colored Mardi Gras beads and a T-shirt profanely disrespecting CWS participant Tulane, was parked on a barstool in Omaha one night when a stranger asked him what people thought of the new football coach, Les Miles. 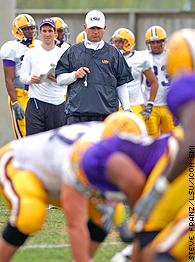 "We like him, think he'll do a good job," the guy said. "With the talent he inherits, we should win 10 games."

The guy laughed, adding, "And if we don't, we'll run him off and get somebody else."

Buttoned-down Les Miles -- born in Ohio, schooled in Michigan, with most of his coaching done in the Big 12 -- has transported himself into a whole new world. It's different in Louisiana, and we're not just talking about the food and the accents and the naked people in the streets on Fat Tuesday. They look at football differently, too -- with a unique mixture of joy, passion and insatiable lust for victories.

You could argue that a dozen different locales in America care as deeply about college football. But there might not be any that care as crazily.

"I said, 'I bet you haven't talked to any crazier people, huh?'" Williams recalled. "He said, 'They haven't been that bad.'"

"Wait till Sept. 3," he said. "He might have a different opinion after that first Saturday."

Until then, the LSU fans will go out of their way to make the outsider coach feel welcome in Baton Rouge -- with the tacit understanding that he really, really needs to win big. Now.

Winning a share of the 2003 national title fulfilled a 45-year craving for LSU fans. But it also seems to have whetted their appetites for more, more, more.

Last year's 9-3 season was greeted with muted applause. A similar record this year, with a loaded roster left behind by Nick Saban, would be greeted with something closer to disappointment.

Miles certainly doesn't sound scared of the expectations. He's far from bombastic, but he's not going to poor-mouth his way into this season, either.

"The program is in great shape," he said. "There's arguably no finer football program in the country."

That kind of rhetoric has been well received on the banquet circuit, where the fans have not been shy about telling the new coach what they want out of him.

"I got in the car as they took me to the opportunity to speak, and the guy talks about nine wins," Miles recounted. "And then at the podium someone mentioned 10 or 11. Then a guy said, 'Well, you know, 12 victories is probably just what we'd like, Coach.' I said, 'Frankly, there's one left.'"

Miles' math is correct. It would take 13 victories to run the table -- nearly half the number of his career wins as a college head coach.

There's no catchy slogan on the cover of the LSU media guide, but there are reasons why it should have read "Settling For Les."

• Miles brings a 28-21 record from Oklahoma State to LSU. Duplicate that in Baton Rouge and he'll be fired.

• Until the preseason polls came out this month, he never coached a team ranked higher than 15th -- and as soon as Oklahoma State reached that ranking in 2003, it was pummeled 52-9 by Oklahoma.

Then again, you can make the counterpoint that the slogan should have read "Les Is More."

• Miles didn't win big at Oklahoma State, but before he arrived, the school had managed just one winning season in the 12 years after Barry Sanders hung up his cleats. The Cowboys were ranked in the top 25 for 15 of Miles' last 18 games at OSU.

• He did compelling work last year revamping a throw-it-around offense into a run-first attack, showing his versatility.

Most of all, he fell right out of the Nick Saban template. Not in terms of personality -- Miles has yet to make a lineman cry, that we know of -- but in terms of career path.

Both worked on the NFL level (Miles coached three years with the Cowboys, Saban coached five years with the Houston Oilers and Cleveland Browns). Both did solid jobs at Little Brother schools in big conferences (Miles at Oklahoma State, Saban at Michigan State). Both have Midwestern roots, but neither saw his complete unfamiliarity with Louisiana as an impediment to getting the job done.

Saban's monomania worked well in Baton Rouge -- he was single-minded in pursuit of victory, and that was fine with the LSU crowd. But when you're riding the Tiger, you sure don't want to fall off. The bones of Saban's predecessors litter the Louisiana landscape: Gerry DiNardo, Curley Hallman, Mike Archer

At least Miles gets to start off with Saban's talent. Winning like Saban would be nice.

And as the guy in the bar in Omaha said, they can always run Les Miles off if he doesn't.