In a season loaded with great games, here are the best of the best.

Notre Dame at Pittsburgh (Sept. 3)
Someone's college coaching career will get off to a good start when Charlie Weis and Dave Wannstedt face off.

Boise State at Georgia (Sept. 3)
If the Broncos plan on following Utah's model on how to crash the BCS, it all starts with a big win on the opening weekend (see Utah's 41-21 win over Texas A&M last year).

Miami at Florida State (Sept. 5)
Both the Canes and the 'Noles are overlooked when it comes to talk about winning the ACC or playing in the Rose Bowl. Both will look to make a statement here.

Tennessee at Florida (Sept. 17)
By the time this game rolls around, it will be one game into the lovefest that is the Urban Meyer era, but if he doesn't beat the Vols, there will be some grumbling in Gainesville.

Bowling Green at Boise State (Sept. 21)
The BCS Buster Bowl? Look for plenty of offensive fireworks on the smurf turf when Omar Jacobs and the Falcons visit Jared Zabransky and the Broncos. 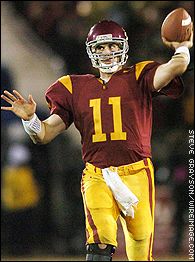 Notre Dame at Washington (Sept. 24)
Getting Tyrone Willingham to admit this game has a little extra juice is about as likely as Touchdown Jesus lowering his arms, but there's little doubt Willingham would love to knock off the Irish.

USC at Oregon (Sept. 24)
Autzen Stadium is still the toughest place to play in the Pac-10. The Ducks are much improved over last year and have a legitimate chance of snapping USC's winning streak (which will likely be 24 by the time the Trojans play Oregon).

Iowa at Ohio State (Sept. 24)
The round-robin tournament between the Big Three (Iowa, Ohio State and Michigan) in the Big Ten begins here.

Tennessee at LSU (Sept. 24)
If Tennessee managed to escape Florida with a win and somehow beats a LSU team many are picking to win the SEC, the Vols claim the inside track on the run for the Rose Bowl.

USC at Arizona State (Oct. 1)
This is what we're reduced to ... looking for any kind of possible roadblock to USC's quest for another perfect season and a threepeat. So, we bring up the Sun Devils, who have a high-flying offense which might be good enough to test the young Trojan defense.

Oklahoma vs. Texas (Oct. 8)
All together now -- is this the year Mack Brown finally beats Oklahoma? Texas is easily talented enough to do it, but this game may be more mental than physical for the Horns.

Texas Tech at Nebraska (Oct. 8)
Nebraska has been waiting 364 days for this game, for a little chance at payback for the 70-10 woodshed beating that was the Huskers worst loss ever (the Huskers had never lost by more than 54 points in its previous 1,136 games).

Iowa at Purdue (Oct. 8)
Should the Big Three stumble, Purdue is poised for a run at the Big Ten title. The Hawkeyes are the Boilermakes toughest test and a win here could mean an undefeated run for Purdue.

Florida at LSU (Oct. 15)
A preview of the SEC title game? A battle between arguably the two most physically talented teams in the conference.

USC at Notre Dame (Oct. 15)
It will take a grotto full of candles and some serious serious luck of the Irish for Charlie Weis and Co. to pull of this upset, but still, stranger things have happened at Notre Dame.

Tennessee at Alabama (Oct. 22)
The classic rivalry gets a little extra juice when Phil Fulmer -- Crimson Tide public enemy No. 1 for ratting out the Tide to the NCAA -- returns to Alabama.

Michigan at Iowa (Oct. 22)
A matchup worth of Bo Schembechler and Hayden Fry.

Florida vs. Georgia (Oct. 29)
The World's Largest Outdoor Cocktail Party is always an event worth watching.

South Carolina at Tennessee (Oct. 29)
Steve Spurrier returns home (people forget he was born in Tennessee) to spar with his favorite whipping boy Phil Fulmer. Unfortunately for the Ol' Ball Coach, he doesn't have the talent he's used to having.

Pittsburgh at Louisville (Nov. 3)
The Big East could be decided in this game. Dave Wannstedt's defense vs. Bobby Petrino's high-flying offense with the winner moving in the driver's seat for a BCS bowl berth. 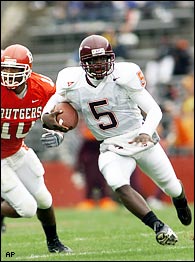 Miami at Virginia Tech (Nov. 5)
A rivalry that is getting better all the time. The Hokies have won the last two -- a fact not lost on the Canes -- and a third sets them up for a possible repeat as ACC champs.

USC at Cal (Nov. 11)
Cal is the only team to beat the Trojans in the last two years and the Bears nearly won last year. The Bears are one of the few tough hurdles for the Trojans.

Florida at South Carolina (Nov. 11)
Now this will be fun. Steve Spurrier doesn't have the talent Florida has, but he'll break out everything in his arsenal to top his alma mater.

Texas A&M at Oklahoma (Nov. 11)
A win here boosts Reggie McNeal's Heisman hopes and turns the Aggies into more than just a sleeper pick in the Big 12.

Alabama at Auburn (Nov. 19)
The Iron Bowl is just too good to miss.

Ohio State at Michigan (Nov. 19)
One of the best rivalries in the game may be for a shot at the Rose Bowl (which this year means a shot at the national championship).

Toledo vs. Bowling Green (Nov. 22)
Like offense? Don't miss this one featuring two of the nation's top -- if not overlooked -- QBs in BG's Omar Jacobs and Toledo's Bruce Gradkowski.

Florida State at Florida (Nov. 26)
The faces on the Florida sideline change, but Florida State remains the same. Bobby Bowden is in his 30th season at FSU and still gets the better of Florida more often than not (he's 17-13-1 against the Gators).

Texas at Texas A&M (Nov. 25)
Ah, now this will be something special. The scene will be phenominal at College Station and the game promises to be one of the best, especially if Texas enters undefeated.

Army vs. Navy (Dec. 3)
The purest rivalry in college football. There is no BCS bowl talk here, just bragging rights. And to the players for Army and Navy, that's more important anyway.