It was an throwaway comment made by Louisville head coach Bobby Petrino during the Big East Conference preview last month, yet it said volumes about the state of the running game in college football.

Petrino spoke of his senior tailback Michael Bush, a 6-foot-3, 247-pound tailback who delivers punishment and first downs in equal doses. Bush rushed for 1,143 yards and 23 touchdowns last season despite missing four starts because of injuries. He is the kind of tailback that every college coach wants. 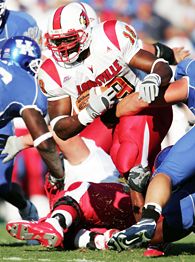 And here is what Petrino said.

It's a sentiment that any coach with a back as talented as Bush would voice. But look again. Petrino didn't say that he wanted Bush to run the ball 25, 30 times a game. He wanted the ball in Bush's hands that many times. Bush may run, but Bush will also catch passes.

As coaches strive for more balance, as they try to find that second dimension that will tamp down aggressive defenses, the coaches have created the era of the Incredible Shrinking Tailback. There just aren't as many carries out there as there used to be.

Though the guys at the top of the NCAA Division I-A rushing list continue to get their 25 carries per game, the numbers throughout all of I-A tell a different story.

Over the last 35 years, according to the NCAA, offenses have averaged a little more than 70 plays per game. In the mid-1970s, at the height of the option game, offenses peaked with an average of 51.9 rushes per game. That average has headed south ever since.

It is hardly news that the passing game has become as much a part of college football as oversalted popcorn. The statistics confirm the anecdotal evidence. The number of backs with 25 carries per game has remained relatively constant over the last 20 years. Cream rises, and the best players are going to be utilized. 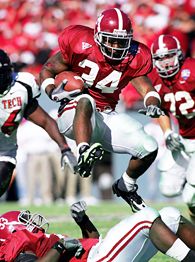 It's what happens below the top rung that has evolved. There are fewer carries because of the increase in passing, and there are more backs to share those carries. As specialization continues to trickle down to college ranks from the NFL, more coaches shuttle two or three tailbacks into the game, depending on the play call or merely the desire to keep players fresh.

Only once in Mark Richt's five seasons at Georgia has a back carried the ball more than 172 times in one season, which is, in a 12-game season, fewer than 15 carries per game. Richt believes in using more than one back.

"We rushed for 1500-1600 yards at the tailback position last year," Richt said last month. "So we ran the ball pretty good. We just spread the wealth, so to speak. I think you [have] got to have at least two that can share it. If you [have] got one guy carrying it 20 to 25 times a game, especially if it's a two- or three-year career, that guy's going to get beat up. [It's] very rare that a guy will stay healthy and very rare that he'll have much left over at the end."

Some coaches turn to one back out of necessity, whether from injury or a lack of depth. The leading rusher in the nation last season, DeAngelo Williams of Memphis, also led I-A in carries per game (28.2). But Memphis lost three quarterbacks to injury. Coach Tommy West depended on Williams because he had little else.

At Alabama, tailback Ken Darby became the offense two years ago after quarterback Brodie Croyle suffered a season-ending injury. In one four-game stretch, Darby carried the ball a total of 125 times. Last season, Darby carried the ball more than 23 times only once, in the Tide's 13-10 Cotton Bowl victory over Texas Tech. This year too, Shula expects to use Darby more judiciously.

"Two years ago we ran the ball probably as much as any team I've ever been around," Shula said. "I'm not sure we'll see him carrying it that much just because of a couple reasons. One, we feel like we have an ability to throw the football. We also feel like we've got some other guys behind him."

Nebraska coach Bill Callahan said he may use as many as five backs this season, depending upon the play on the field. His first goal is offensive balance. He doesn't care how many backs he needs to achieve it.

"I would never box myself into a corner [by saying], 'We're going to be a committee,' or 'This is the guy,'" said Callahan, whose leading rusher last season, Cory Ross, carried the ball 225 times for 882 yards. "We compete on an ongoing basis. These players earn their roles on this team. We will continue to run the football. That is a staple in our philosophy."

What's interesting is that, even as many coaches try to achieve balance in their offense, or balance in their distribution of carries, they continue to acknowledge the advantage that comes from having one special tailback.

Last season, Pittsburgh didn't have a back carry the ball more than 96 times all season. Yet Panthers coach Dave Wannstedt said if you gave him another Tony Dorsett, the Panthers Hall of Famer from the 1970s, Wannstedt's team would go old-school in a heartbeat.

"We're looking for one," Wannstedt said. "If we find one, he'll get it that much. You don't have to worry about it. That has not changed with me. Everything I've always believed in, and every championship team I've worked with, has had one."

The goal remains the same: win the game. How coaches try to do so never remains the same. There may come a time when the power running game reigns supreme once again. But it's been 30 years since it peaked, and the evolution toward offensive balance shows no sign of abating. The shrinking tailback may be here to stay.