In 1987, Barry Sanders sat on the Oklahoma State bench behind senior All-American Thurman Thomas. Sanders, in limited time, rushed for 622 yards. The next season, Sanders won the Heisman Trophy.

In 2004, Ronnie Brown lined up alongside Cadillac Williams at Auburn. Williams rushed for 1,165 yards. Brown rushed for 913. Both players went among the first five picks of the 2005 NFL draft. 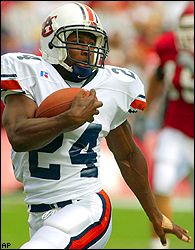 The point is simple. In the intervening 17 seasons, it became not only acceptable but fashionable for a coach to put his two best running backs on the field in tandem. Auburn coach Tommy Tuberville rode Brown and Williams to a 13-0 record and No. 2 ranking in 2004.

This season, the Tigers have All-Southeastern Conference senior Kenny Irons at tailback. But he will line up in the backfield with -- not instead of -- senior Tre Smith, junior Carl Stewart or sophomore Brad Lester.

"We kind of fell into it with Ronnie and Carnell the last few years," Tuberville said. "I think it's helped our offense. We hadn't run that before. It's worked with those two. I think it worked some last year. I think it's even going to be better for us this year."

It is not a traditional fullback-tailback setup, although even teams that use that are looking for a fullback with more traditional tailback skills. Pittsburgh, for instance, moved sophomore Conredge Collins to fullback to get him on the field with tailback LaRod Stephens-Howling. At Rutgers, coach Greg Schiano puts do-it-all senior Brian Leonard in the backfield with a tailback.

The one way an offense doesn't have to eliminate the receiver is if the quarterback has the skills of a tailback, as do Pat White of West Virginia and Troy Smith of Ohio State. It's no coincidence that both teams begin this season highly ranked.

"You can pretty much win games by playing defense and running," Tuberville said. "You're going to have games where you're not going to be successful. The quarterback is off, the weather is not good, dropping passes. Pretty easy to turn around and hand that ball to a running back."

Especially if there are two from which to choose.