CHICAGO -- It is time to refute a rumor, time to put out any fire that might start on the message boards. Before you know it, needless NCAA investigations might begin. Innocent lives might be affected. Feelings might be hurt. Nip it in the bud, as former NCAA president Barney Fife said.

The truth is that Penn State left offensive tackle Levi Brown is a fifth-year senior. Appearances to the contrary, he did not start on Joe Paterno's first Nittany Lions team in 1966. Brown did not play on the same line as two-time All-American Keith Dorney. He did not open holes for Curt Warner. He never protected Kerry Collins in Penn State's undefeated, unrewarded 1994 season.

The Penn State media guide lists Brown's birthday as March 16, 1984. His picture indicates his age of 22 is about as accurate as any that come out of Hollywood. The 6-foot-5, 328-pound frame doesn't make him look like a growing boy, either. Brown's hairline has started to creep northward. His forehead wrinkles make him look closer to 30 than 20.

"He might be," linebacker and teammate Paul Posluszny said, laughing. "He's a grown man. Let's put it that way."

"Pretty much all through high school, my nickname was 'Uncle,'" Brown said. "'Uncle Levi,' something like that. People called me 'Granddaddy.' People say I have an old feel about me. I tend to listen to oldies-type music, music that my parents would listen to, [like] Luther Vandross. I guess I can see where people get that idea about me. It's just who I am."

There are a couple of times when it comes in handy. For one thing, Brown probably hasn't been carded since he was 12. For another, in a season when the Nittany Lions must rebuild an offensive line depleted by graduation if they are to have any chance of repeating as Big Ten Conference champions, Brown's presence will be as important as his talent, which is considerable.

"He's tough to go against," Posluszny said. "He's so big. He got long arms. He's so strong. He's a good athlete, too. He came here as a defensive lineman, so you know he can run a little bit." 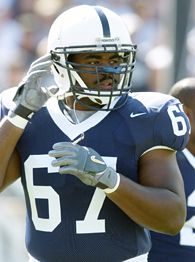 Keep in mind what defensive players generally think of offensive linemen, and Posluszny's words -- "He's a good athlete, too. He came here as a defensive lineman  " -- take on greater weight. Brown had the same concerns as a young tackle when, in the spring practice of his freshman year, the offensive coaches asked him to move. The mental adjustment, Brown said, took a year.

"I personally like to hit people," Brown said. "My preconception about offense was you couldn't really go out and hit a person.

"Everything was so tamed down, more controlled, whatever. After being over there and seeing you can go and just take off and fire into a guy -- you just have to be leveraged and have your hands inside [or get called for holding], I started to enjoy it. I realized I could just try to dominate a guy, flatten a guy. The coaches would just always tell me, 'You have the potential. You just have to believe it. You just have to believe you can be the best at your position. Once you do, things will take off for you.'"

Brown made All-Big Ten last year, and he will be watched closely by NFL scouts all season long. But the old soul in him is necessary this season because he is the only returning starter on the offensive line.

"We've got to get some offensive linemen who grow up in a hurry," Paterno said. "They have a lot of ability, but none of them have played. We've got some guys who are going to play some tough football teams that have never gotten punch-in-the-nose tough yet."

The lack of experience is the biggest reason that Penn State is being picked closer to the middle of the Big Ten pack than to repeat at the top. The offensive line, the unit most in need of chemistry, will depend on Brown's leadership.

"It doesn't take long for chemistry to form as long as you're hanging out with the guys when it's not football time," Brown said. "If you just try to find out what kind of person they are on the football field, it's harder and takes a little bit more time before you really trust this guy, knowing that he'll have your back and help you when you miss a block."

Brown said the offensive linemen performed the traditional bonding rituals -- PlayStation, Xbox -- but they also held bowling nights and disappeared into the woods around campus to play paintball.

"Paintball was the greatest time I've had in a long time," Brown said. "I'm definitely going to do it again. People were saying it was supposed to hurt, that paintballs would break your skin. But from the range people were shooting, hiding behind trees, it wasn't like they were getting a direct hit on you. It felt like somebody was pushing you. It didn't really hurt. More like a pinch than it was sudden pain."

Still, you know how it is when you get old. Everything hurts.