KANSAS CITY, Mo. -- Oklahoma tailback Adrian Peterson burst onto the college scene in 2004 looking like a man among boys. When the pads came off, however, he seemed more like a boy among men. In the few interviews he did, he sounded like the unsure 19-year-old he was.

Fast-forward two years, and there is a noticeable difference. Peterson is comfortable, smiling, engaging in give-and-take with the media. Peterson has had good times and bad in a Sooners uniform, and has come out on the other side of both. He played well enough as a freshman to rush for 1,925 yards and 15 touchdowns and finish second to Matt Leinart in the Heisman Trophy balloting.

As a sophomore, he suffered an ankle injury in the season opener, aggravated it a couple of weeks later and missed a good chunk of four games. Running pretty much on one ankle, with few of the moves he showed as a freshman, Peterson still gained 1,104 yards and scored 14 touchdowns.

As much as he knew instinctively when he got on the field, he learned a larger lesson when he couldn't get out there.

"I guess you'd say [I'm] more determined, a little more hungry to go out there and try to get something done," Peterson said. "I've been preparing myself to get ready for this season. My whole attitude and approach has changed this season. With the ankle injury, sitting back and being able to watch my guys play without me [taught me not] to take that for granted and to take advantage of every opportunity."

That maturity you hear is the only thing standing between Oklahoma and an offensive disaster this fall. With the dismissal of quarterback Rhett Bomar from the team earlier this month, Peterson became the offense.

When Bomar was still around, Peterson said he hoped for at least 20 carries per game. After the dismissal, coach Bob Stoops was quoted as saying Peterson might get 35 to 40 carries per game. That might be an exaggeration. No Division I-A back has ever carried the ball 40 times per game.

But Stoops is not afraid to use Peterson. One of the reasons Peterson rushed for nearly 2,000 yards as a freshman is that he carried the ball 339 times, 26.1 times per game.

Peterson refers to himself "running wild" as a freshman and said he's a much better back now. The difference, he said, is the "little things. Being patient for the hole. Waiting for the hole to develop. Your footwork, little things like that that you don't think matter much make a big difference. So just focus on doing the little things, and [that will] make things a lot easier."

Peterson had an outstanding offensive line in 2004, which he does not have this season.
The question is whether Stoops will have a choice. If fifth-year senior quarterback-turned-wide-receiver-and-back-again Paul Thompson can play catch-up on the tweaks in the offense provided by new coordinator Kevin Wilson, perhaps Peterson won't attract as much attention from the defense. 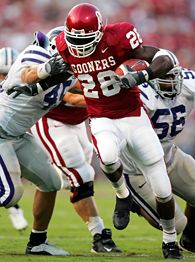 Until that time, however, Peterson will be the man. The emphasis on him might help his chances of winning the Heisman he nearly won two years ago. Another sign of his maturity is that he didn't go mealymouthed when the subject of the Heisman arose.

"It's something that I would love to win, something that I have wanted to win since I was little," Peterson said. "But it's not my main focus. I feel like if we take care of everything else, any individual awards will come along with it."

He is a little more coy about what he would like to achieve this season, more out of a sense of privacy than insecurity, though.

These mysterious goals, Stoops said, might keep Peterson from leaving after this season for the NFL. You probably could get better odds on a San Francisco-Oakland Super Bowl this coming February, but there is a chance.

"There are some college goals that are worth attaining, if that's what he wants," the coach said. And Stoops said he will tell Peterson if it's time for him to go to the NFL.

"I told [former OU All-American safety] Roy Williams, I saw his eyes before the [2002 Cotton Bowl] Arkansas game. I could tell he was bored with this. Everybody felt he would be a top-10 pick, and he was. He asked me, and I said, 'Yeah, you ought to go.' He was a fourth-year junior.

"It shouldn't be assumed," Stoops said of Peterson. "He has goals he wants to attain."

The question: Does Peterson achieve more individually because he will represent a greater part of the offense, or does he achieve less because defenses will focus on him more than ever?

On such answers are seasons built.