BIRMINGHAM, Ala. -- There aren't many freshmen anywhere in Division I-A who can arrive on campus and start. For most of them, just getting from class to dorm to locker room is a good day. Free safety LaRon Landry not only proved himself good enough to start as a freshman but also started 10 games for the LSU team that won the 2003 national championship.

And led the defense with 80 tackles, to boot.

When Landry, now a senior, looks back at video of his play that season, it's all he can do to keep from bursting into laughter. 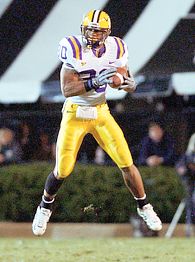 "I had tunnel vision," Landry said. "I really didn't worry about the crowd, what everybody else's assignment was. I just played ball. I really didn't have that mental aspect of the game. I would just guard [the receiver]. It was a physical thing, playing, creating havoc. Now I really sit back there, look at my keys, a guard pulling on you, things like that. I look at things like that.

"It's very funny when I look back on it."

Three years later, Landry is the consensus pick as the top free safety in the nation. He shuns the talk of him as an All-American, but the facts are plain. He has started 35 college games and made 241 tackles, nine interceptions and seven sacks. Listed at 6-foot-2, 204 pounds, Landry has NFL size and the speed to patrol the area between the hash marks.

"Playing center field, going for interceptions, big hits, stopping the run," Landry said. "I like it all."

"He has an intuitive break on a ball that's thrown," Miles said. "When he contacts you, when he brings contact in to bear, it is a very physical force. I think he's as good as there is."

But what made Landry the player that he is hearkens to that freshman year, two seasons before Miles replaced Nick Saban. Whether Landry had tunnel vision or not, he did absorb something important. He watched the way upperclassmen Corey Webster and Travis Daniels carried themselves in the secondary and off the field. He saw how they led the defense, how they helped him when he felt so lost it seemed as if he had never before set foot on a football field.

Those lessons made such an impact on Landry that when the NFL waved high draft status at him last winter, he barely gave it a second thought.

Landry, Miles said, "made a decision last year to postpone wealth and the NFL and chose to return to school, to come back and play with his team and be around his schoolmates. I think it's a very selfless decision. I think it speaks to his leadership."

Landry referred several times to "personal goals" that lured him away from the lucre and back to Baton Rouge for his senior season. Once someone prompted him to list those goals, it became clear how big an impact the older players made on him three years ago.

Landry's personal goals, he said, include "national championship, being a leader, things like that. I look at it like, Corey Webster and [defensive lineman] Marcus Spears were candidates to leave their junior year, and they came back their senior year and did well. They were mentors to the younger guys. I really like those guys' character and I want to follow in their footsteps of finishing up strong."

Landry also attended Senior Day at Georgia Tech last season and watched his older brother, Dawan, the Yellow Jackets' starting free safety, be recognized by the fans before the game. There are other things more important to him, he discovered, than money.

"I knew the whole time what I wanted to do, what I had in my heart," Landry said. "I just really wanted to take my time, don't overwhelm myself, just make the right decision. I always had in my heart [that] I wanted to come back. It's just a feeling I had that I just didn't leave it all on the field like I wanted to."

When you've endured what the LSU team endured last season -- the wrath and aftermath of Hurricane Katrina -- you learn to value what's in your heart.

"We had to overcome adversity," Landry said. "That's one of the main reasons we came together as a team, with one heartbeat. We feel that any obstacle that comes our way this season, we should be able to overcome it."

Landry's leadership is needed on a defense with an inexperienced front seven. His personal goals coincide with the Tigers' needs. It is the reason he isn't in an NFL camp right now. He speaks regularly with Dawan, the Ravens' fifth-round draft choice. He is hearing what his life will be like a year from now. But he feels completely at peace with the notion that the NFL is a year away.

That "amen" came from the entire Tigers Nation.