Since the inception of the Bowl Championship Series in 1998, less than a dozen schools have played in college football's national championship games. Nine of the schools are among the sport's traditional powers: Florida State, LSU, Miami, Nebraska, Ohio State, Oklahoma, Southern California, Tennessee and Texas.

Only once has an upstart team crashed the party: Virginia Tech in 1999, when the Hokies featured a flashy freshman quarterback named Michael Vick and ultimately lost to the Seminoles in the championship game.

This season, more than a half-dozen teams seem to have realistic chances of reaching the BCS championship game, to be played Jan. 8 at Cardinals Stadium in Glendale, Ariz. The usual suspects are again contenders: Notre Dame, Ohio State, Oklahoma, USC and Texas, the defending national champion, are ranked in the top five of the preseason coaches' poll. But what will it take for a team such as California, Louisville, TCU or West Virginia to rise from bystander to legitimate championship contender?

According to several coaches who have won national titles in the past, and others who are still trying to win one, the blueprint for a national championship run includes talent, coaching, balance, playing the right schedule and, perhaps more than anything else, a heavy dose of good luck. 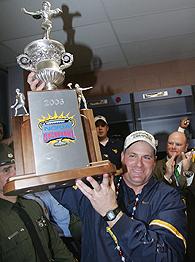 The top contenders for the 2006 national title all have legitimate concerns. Notre Dame plays arguably the country's toughest schedule, with road games at Georgia Tech and USC and home games against Penn State, Michigan and UCLA. Ohio State must replace all three of its linebackers and its entire secondary and plays at Texas and Iowa. Oklahoma lost its starting quarterback, Rhett Bomar, who was booted off the team last week for violating NCAA rules. USC lost the last two Heisman Trophy winners -- quarterback Matt Leinart and tailback Reggie Bush -- along with a host of other top players to the NFL. And Texas has a new quarterback after Vince Young bolted for the NFL.

So which team has fewer concerns than any other, in terms of coaching, personnel, scheme and schedule? West Virginia, which last season made its BCS debut and beat Georgia 38-35 in the Sugar Bowl. The Mountaineers return 15 starters from a team that last season went 11-1 (7-0 Big East). This season, West Virginia might have all the pieces in place to make a sustained run toward a national championship, some 18 years after quarterback Major Harris last had the Mountaineers in such lofty position.

"The expectations are high," West Virginia coach Rich Rodriguez said. "You should have high expectations. They have them at Texas, Ohio State and USC. It's part of building the program up."

Here's a closer look at why West Virginia matches the blueprint for reaching the BCS title game:

Talent
Blueprint: To contend for a national championship, a team needs at least one game breaker, a player like Young, who carried the Longhorns on his back last season and then almost single-handedly beat the Trojans with 467 total yards in the Rose Bowl.

How they fit: The Mountaineers have two game breakers. Quarterback Pat White and tailback Steve Slaton burst onto the college football scene last season like few freshmen have before. 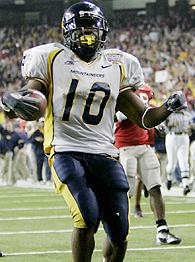 "Normally with young kids, they get nervous when the stage gets bigger," Rodriguez said. "For our guys, though, the bigger the stage was, the calmer they were. That's how smart I was -- Stevie and Pat didn't start until midseason."

White didn't start under center for West Virginia until the eighth game in 2005, and only after Adam Bednarik suffered neck, shoulder, knee and foot injuries. In only five starts, though, White ran for 952 yards and seven touchdowns. He attempted only 114 passes and wasn't particularly accurate (57 percent), but he spent the offseason improving his throwing.

"He's a tailback playing quarterback," said Georgia defensive coordinator Willie Martinez, whose defense allowed White to run for 77 yards and throw for 120 yards and one touchdown in the Sugar Bowl.

Slaton played behind Pernell Williams and Jason Colson during the first month of the 2005 season. He made his first start at Rutgers in the sixth game and never looked back, running for 1,128 yards and 17 touchdowns. Slaton had 204 rushing yards against Georgia in the Sugar Bowl, averaging nearly 10 yards per carry and scoring two early touchdowns to stake the Mountaineers a 28-0 lead.

Coaching
Blueprint: Every national championship contender has exhibited solid coaching and a superior scheme. Nebraska used the option to win national titles in 1994, 1995 and a share of the championship in 1997 under legendary coach Tom Osborne. Steve Spurrier had his Fun 'N' Gun offense when Florida won it all in 1996.

Rodriguez is considered one of the brightest offensive minds in college football. Coaches from Florida, Texas A&M, California, Ohio State and Alabama, among other schools, visited Morgantown during the offseason. They learned aspects about the offense, and Rodriguez discovered the changes defenses were making in defending it.

"The whole philosophy was let's run a two-minute offense for four quarters," Rodriguez said. "See what happens. It all started from that. Every year it has been tweaked. People say all these teams are running spread offenses now, but everybody has a little different version or philosophy. It's not like the wishbone, where a wishbone is a wishbone."

The biggest difference between the spread offense West Virginia employs and the variations run by such teams as Florida and Utah is that the Mountaineers have set running plays out of a one-back set and run reads for the quarterback. And, of course, the Mountaineers have the talent to exploit defenses.

"No. 1, it's the quarterback," Martinez said. "If they don't have the quarterback, they don't stretch you as much. You don't have a hat for that. Somebody has to get off a block. A linebacker has to make a play. A safety has to make a play. [White] makes people miss. Slaton is a great player. The fullback [Owen Schmitt] is a good player. I think what makes them go is not so much the complexity of the scheme, it's that they've got such talented and athletic guys at key positions. They've got the three-headed monster."

Balance
Blueprint: History suggests a balanced team is key to winning a national championship. Since 1994, only three of the 14 teams that won or shared national titles have allowed more than 100 yards rushing per game: Florida in 1996, Miami in 2001 and Texas last season. The Hurricanes ranked No. 1 in pass defense and scored 43.2 points per game that season. Last year, Texas led the country with 50.2 points per game and was fourth in pass defense and eighth in scoring defense. Seven of the teams that won national titles ranked in the top four in run defense.

How they fit: Everyone knows the Mountaineers can move the football and score points -- they ranked fourth in Division I-A in rushing with 272.4 yards per game and averaged 32.1 points. But West Virginia's 3-3 stack defense has been as perplexing to some teams as its spread offense. The Mountaineers ranked No. 19 in run defense last season, allowing 109.7 yards per game. They must replace All-Big East nose tackle Ernest Hunter, but return defensive tackle Keilen Dykes and hard-nosed linebackers Boo McLee and Jay Henry.

"Our defense has been pretty solid and has bailed us out of some situations," Rodriguez said.

How they fit: The Mountaineers start the season ranked seventh in the USA Today coaches' poll. West Virginia is in a better position to start the season than three of the teams that won national championships since 2000. Oklahoma was No. 20 in the preseason poll in 2000; Ohio State was No. 12 in 2002 and LSU was No. 15 in 2003.

Because West Virginia plays in the underappreciated Big East, it has very little room for error because the perception is it has only one team to beat: Louisville. And because the Mountaineers' nonconference schedule -- home games against Marshall, Eastern Washington and Maryland and road games at East Carolina and Mississippi State -- isn't perceived as very daunting, either, they might need to win each game convincingly.

"It's like our own reality show," Rodriguez said. "We play on three Thursdays and a Friday. I just hope they don't kick me off the island. But the exposure is great."

Luck Along The Way
Blueprint: Every team that ends up in college football's championship game has some. In 1996, Florida lost to FSU in its last regular-season game and fell to No. 4 in the national rankings. But then the Gators beat Alabama in the SEC championship game. When Nebraska, a 20-point favorite and two-time defending national champion, lost to Texas in the Big 12 title game, Florida played FSU again in the Sugar Bowl and won the national title.

"We know that we had an extreme amount of good fortune with all the teams ahead of us losing," Spurrier said.

Arkansas quarterback Clint Stoerner dropped the football against Tennessee in 1998. Nebraska's Matt Davison kicked a pass for a touchdown against Missouri in 1997. Ohio State's Maurice Clarett stripped Miami's Sean Taylor of the ball in 2002. Last season, Reggie Bush shoved Matt Leinart into the end zone against Notre Dame to keep the Trojans undefeated.

"You've got to have some bounces of the ball," said former Georgia coach Vince Dooley, who led the Bulldogs to their last national title in 1980. "You've got to make your breaks, but there is a percentage that's just sheer luck. You look up and thank the heavens because, sometimes, it just falls into place."

How they fit: Check back on Dec. 3, 2006, when the final BCS standings are announced.