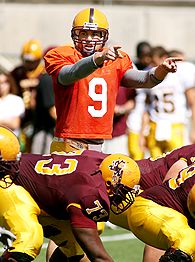 Yet, Keller might not be the Sun Devils' starting quarterback when they open the season against Northern Arizona on Aug. 31.

Rudy Carpenter, who took over when Keller broke his thumb midway through the seventh game of 2005, played so well down the stretch as a freshman that he remains neck-and-neck with the senior incumbent. The starting job probably won't be decided for at least another week, after the Sun Devils finish preseason practice at Camp Tontozona near Payson in the northern Arizona mountains.

"Being me, I see it a certain way and that's me being the guy," Keller said. "But I've got to go out and do it and prove I'm the guy. This kid came in and played great once I got hurt. There are no free rides past go. This kid can play."

From Eugene, Ore., to Austin, Texas, to Athens, Ga., coaches at several schools with championship aspirations are facing tough quarterback questions this preseason. Six of the top 10 teams in the final Associated Press poll last season will have new quarterbacks when they kick off the season in just over three weeks. That includes defending national champion Texas, which will choose between redshirt freshman Colt McCoy and freshman Jevan Snead, and Southern California, which will probably select John David Booty over Mark Sanchez to replace 2004 Heisman Trophy winner Matt Leinart.

Choosing a starting quarterback is always a delicate matter. In 2000, Texas coach Mack Brown rotated Major Applewhite and Chris Simms, the son of former New York Giants quarterback Phil Simms. Applewhite set more than 40 Texas and Big 12 passing records and was a fan favorite. But Applewhite lost the job to Simms during his senior season in 2001.

Simms committed four turnovers in a loss to Oklahoma that season and then again in a loss to Colorado in the Big 12 title game, and Longhorns fans were clamoring for Applewhite. Neither quarterback seemed to like the attention or the controversy.

Like Brown, coaches at schools such as Arkansas, Georgia and Virginia Tech must decide whether to choose a more experienced quarterback or a freshman with more potential. Tennessee coach Phillip Fulmer chose the younger quarterback last season, selecting then-sophomore Erik Ainge over senior Rick Clausen. But Ainge struggled, so Fulmer yanked him and started Clausen in seven of 12 games. Fulmer went back to Ainge late in the season, but by then neither quarterback seemed to have much confidence.

"Certainly, looking back, I could have managed that differently," Fulmer said. "Hindsight is 20/20."

Most coaches say the most difficult aspect of a quarterback battle is choosing one player and sticking with him.

"The closer you are in a competition, the tighter the competition is, the tougher it is to be patient with a guy," said Georgia coach Mark Richt, who is trying to choose a new starter from among four quarterbacks. "When you have your first-teamer not all that far ahead of your second-teamer, then you are more likely to want to see if the other guy can do it if your starter struggles. Then on the other hand, you don't want your starter to be looking around for the hook. You want him to know you've got enough confidence in him to go through the rough times.

"Every quarterback I've had has gone through some rough times. If the first time something bad happens you yank your starter out, that doesn't bode well, either, no matter what the fans want."

Virginia Tech coach Frank Beamer must replace quarterback Marcus Vick, who was kicked off the team in January for his conduct on and off the field. Beamer will choose from three quarterbacks -- sophomores Sean Glennon and Cory Holt and redshirt freshman Ike Whitaker. Beamer said he will choose only one and won't rotate quarterbacks. Beamer rotated Bryan Randall and Vick during the 2003 season. Hokies fans were enamored with Vick, the younger brother of former Tech All-American and current NFL star Michael Vick, and Randall's confidence wavered.

When Vick was suspended by the university during the 2004 season, Randall blossomed in the full-time role and led the Hokies to an ACC title in their first season in the league. That experience is why Beamer will choose a starter, probably Glennon, and stay with him.

"We've been down the dual-quarterback system before and most of them don't work well," Beamer said. "Most of the people up in the stands are looking too much at results. If the results are good, it's OK. But the first time the results are not good, they're going to say, 'I told you so.' You need to go with a guy and he needs to be the guy for a while."

Perhaps no coach faces as tough of a decision this season as Arizona State's Dirk Koetter. Keller started for injured Andrew Walter in the 2004 Sun Bowl when he threw for 370 yards and three touchdowns and was named MVP in a 27-23 victory over Purdue. He looked just as spectacular early last season, throwing four touchdowns in each of his first four starts and for more than 300 yards in four of his first six games.

But the Sun Devils lost four of their first seven games, and Keller threw five interceptions in a 38-28 loss to USC. All hope seemed lost when Keller was hurt during a 45-35 loss to Stanford. 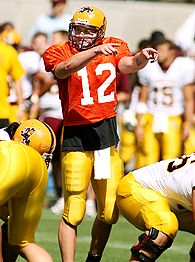 But Carpenter, who redshirted in 2004 after playing his senior season at Westlake High in Los Angeles, sparked the Sun Devils to a 4-1 record in their last five games. He threw for 2,273 yards and 17 touchdowns and led the country in pass efficiency (175.01). Carpenter threw only two interceptions in 228 pass attempts and was named MVP in a 45-40 victory over Rutgers in the Insight Bowl after throwing for 467 yards and four touchdowns.

"My mindset is just to worry about me and control what I can control," Carpenter said. "I can get better in all aspects of my game -- leadership, technique, reading defense and getting mentally tougher. Coach Koetter told us the best player is going to play. I'm sure there's going to be some disappointment with whoever doesn't win the job. But there's only one ball. That's just life, you know?"

Koetter felt that disappointment as a senior quarterback at Idaho State in 1981. He lost the starting job to a junior college transfer, Mike Machurek, who led the Bengals to the Division I-AA national championship that season.

Carpenter might have been named the starter after out-performing Keller during spring practice. But Koetter has a policy preventing players from losing their starting jobs because of injuries and he felt Keller rushed back from his broken thumb to practice during the spring.

The 6-foot-3, 240-pound Keller is a prototype drop-back passer with good arm strength. He is also more vocal than the reserved Carpenter, who is an inch shorter but faster and more athletic. "They are pretty much the opposite," Sun Devils offensive tackle Andrew Carnahan said during Pac-10 media days in Los Angeles earlier this month.

Richt, whose team must replace starting quarterback D.J. Shockley, is choosing from twice as many quarterbacks as Koetter and could play two or even three in the Bulldogs' first game against Division I-AA Western Kentucky on Sept. 2.

Senior Joe Tereshinski III has a tenuous hold on the starting job after starting one game last season when Shockley was hurt and couldn't play against Florida. But much of the attention focuses on freshman Matthew Stafford, who was widely ranked the No. 1 quarterback prospect in the country last season after leading Highland Park (Texas) High to its first Class AAAA state title in 49 years.The 6-foot-3, 228-pound Stafford graduated from high school early and enrolled at Georgia in January. Sophomore Blake Barnes and redshirt freshman Joe Cox, a highly recruited passer from Charlotte, also are in the mix.

"We can't play a guy based on potential," Richt said. "I don't want to look at our seniors and say, 'We're going to play Joe Cox or Stafford to get them ready for next year.' We're going to try to win this year."

Tereshinski is a third-generation Georgia player and his father, Joe Tereshinski Jr., is the team's video coordinator. Tereshinksi has been an unselfish player, lining up as the personal protector on punts and even snapping in one game because the starter was suspended. Tereshinski's knowledge of Georgia's offense -- he was offered an academic scholarship to Harvard coming out of high school -- and his seniority might mean he starts the opener.

Whether he holds the job depends on how he plays, and how quickly Stafford learns the nuances of the offense. Stafford has a much stronger arm and is more athletic than Tereshinski.

"You can never tell what's going to happen," Tereshinski said. "I've never been in a competition with three other guys. You've got to go out there every day to compete. You can't take a day off. Someone you're competing against might have an off day, but two other guys are out there, too."

Richt said he might play two quarterbacks in the first few games, then decide on a starter. Georgia plays its SEC opener at South Carolina on Sept. 9.

Richt can only hope this quarterback decision works out as well as some of the ones he made in the past. For two seasons, Shockley sat behind starter David Greene, who led Georgia to its first SEC title in 20 years in 2002 and left the school as the NCAA's all-time winningest quarterback. Playing parts of games in 2003 and 2004, Shockley waited patiently before starting last season and then led the Bulldogs to another SEC championship last season.

"It worked about as well as it could work considering they were one year apart," Richt said.

Richt faced another tough call when he was the quarterbacks coach at Florida State in 1991. The Seminoles had two senior quarterbacks -- Brad Johnson and Casey Weldon. Johnson started the season but was eventually replaced by Weldon, who led FSU to an 11-2 record and 10-2 win over Texas A&M in the Cotton Bowl. Johnson is still playing in the NFL and has remained close to Richt despite getting the hook as a senior. Johnson's wife Nikki is Richt's sister.

If only all quarterback decisions turned out that well.