AUBURN, Ala. -- Auburn cornerback David Irons Jr. couldn't take his eyes off the reporter's notebook as he sat down for an interview last week. On the back and front covers of the notebook were color photographs of Louisville quarterback Brian Brohm and tailback Michael Bush, whom the school is touting as the "Derby City Duo" in its Heisman Trophy promotions. 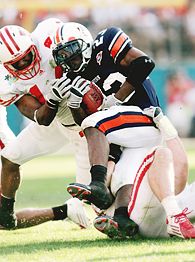 "Man, my brother better step up his game," Irons said of his younger brother, Kenny Irons, the Tigers' star tailback. "Auburn probably won't do that for him because he's an ugly guy. His looks might hurt his Heisman campaign. It sure won't help. But if there was an award for being ugly, he'd definitely win it hands down."

David Irons Jr. might be his brother's biggest critic, but he is also one of the primary reasons Kenny went from being a fourth-string tailback at South Carolina to a Heisman Trophy hopeful at Auburn and possible first-round selection in next year's NFL draft. As cruel as the elder brother might sound, the needling and sarcasm are what Kenny missed most during the three years he was separated from his sibling.

Kenny Irons always had the rare combination of size, power and speed needed to become one of the most feared running backs in college football. But during his two seasons at South Carolina, he lacked confidence and drive. And without his older brother constantly barking in his ear, whether it was shouts of encouragement or criticism, Kenny went into a shell. He spent most of his time off the field alone in his dorm room banging on a broken TV, and much of his time on the field falling deeper and deeper into former Gamecocks coach Lou Holtz's doghouse.

"I was depressed and I was running like a robot," Kenny Irons said. "Just like how Lou Holtz wanted me to run."

The Irons brothers always have been especially close and were seemingly always together growing up in Voorhees, N.J. They were born less than a year apart -- Kenny turns 23 on Sept. 15; David will be 24 on Oct. 9. Their father, David Irons Sr., took sole custody of his sons when Kenny was 2 and David was 3.

The patriarch of the Irons clan played football at North Carolina A&T and immediately pushed his sons toward the sport.

Kenny Irons played fullback on their 75-pound Pop Warner League football team, and his brother David and Adam Taliaferro, the former Penn State cornerback who broke his neck against Ohio State in September 2000, were the tailbacks in a wishbone offense.

Kenny and David's stepmother, Tawana Irons, became concerned that her husband was spending too much time teaching their sons to play football. She thought they needed to play other sports, too.

"So I got mad one day and went to Sears and bought baseballs, bats, gloves, basketballs, soccer balls and equipment for every sport," their father recalled. "But they loved football."

After the family moved to Georgia in 1996, both sons became star running backs at Dacula High School in suburban Atlanta and among the most recruited prospects in the Southeast.

In 2001, David signed to play football at Auburn, but failed to academically qualify and instead enrolled at Butler County Community College in Kansas that fall. Kenny was left behind to finish his senior season of high school. David tore knee ligaments during the first week of practice at Butler Community College and ended up staying there for three football seasons.

"David was calling me all the time, saying, 'Man, this place sucks. You look out and all you see is cows,'" Kenny recalled. "He said they would eat hamburgers every night. He said he would have to change up the condiments so he could have some variety. He would eat a hamburger with lettuce one day, no lettuce the next and then with just ketchup and mustard. He said it wasn't like playing football at a big university, where you got a new pair of cleats, gloves, Under Armour shirts and whatever. It wasn't like that in junior college."

Kenny was determined to avoid the daunting path his brother was forced to take to big-time college football. Although the younger Irons brother still hadn't qualified academically during his senior year of high school, he was receiving tutoring for the SAT. That spring, he received a qualifying SAT score. Auburn had recruited Kenny to play tailback, but with David still headed there to play defensive back, the brothers figured it was time to go their separate ways. So Kenny chose to sign with South Carolina.

"I don't think it was about us," Auburn coach Tommy Tuberville said. "I think Kenny just wanted to do his own thing and go somewhere his brother wasn't going."

Kenny got off to a fast start at South Carolina in 2002. He played in nine games as a freshman and started against Mississippi State, running for 43 yards and scoring on a 30-yard catch in a 34-10 victory over the Bulldogs. His future there seemed bright. 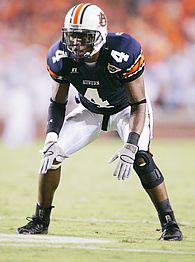 But then Holtz signed highly regarded recruit Demetris Summers of nearby Lexington, S.C., who was the state's all-time leading rusher and considered the top tailback prospect in the country. Holtz promised Summers that if he signed with the Gamecocks, he would run the football on the team's very first play of the 2003 season. Before Summers enrolled at South Carolina, his No. 31 jersey was being sold in the school's bookstore.

Holtz followed through on his promise to Summers, who ran for 10 yards on the first offensive play in the opener against Louisiana-Lafayette.

Kenny became an afterthought at South Carolina and fell on the depth chart, behind not only Summers, but also lesser talented running backs such as Daccus Turman and Gonzie Gray.

Kenny Irons carried 19 times in five games for the Gamecocks as a sophomore. Off the field, he often remained in his dorm room, away from his teammates and coaches.

"My energy just vanished," Kenny Irons said. "I didn't want to do anything. My father had given me a broken TV that would turn off every five minutes and you'd have to hit it for it to come back on. I preferred to sit there all day banging that TV than go out with the fellas. My biggest fear was being a failure. I always wanted to be successful. I didn't know if I was going to be bagging groceries or what."

When David Sr. arrived in Columbia, S.C., in November 2003 to take his son home, he noticed Kenny had lost more than 30 pounds, his hair was unkempt and and he was dating a girl his father didn't approve of. David Sr. knew his son was depressed.

After the 2003 season, Kenny asked Holtz to release him from his scholarship so he could transfer. He never mentioned the possibility of going to Auburn, and Holtz told him he could go wherever he wanted. Kenny chose to join his brother and play for the Tigers.

Holtz, who retired as the Gamecocks' coach two years ago and is now a college football analyst for ESPN, didn't return telephone calls seeking comment for this story. Summers played two seasons for the Gamecocks and was dismissed from the team by new coach Steve Spurrier in March 2005.

"My wife always tells me to drop it," David Sr. said. "But it would be easier for me if Holtz would just call and say he made a mistake."

The eldest brother arrived at Auburn in January 2004, a few months before his younger brother enrolled there. David Irons expected to play for the Tigers that season, but tore knee ligaments again during preseason camp. So both brothers spent the 2004 season watching from the sideline, as Kenny was forced to sit under NCAA transfer rules. The Tigers went undefeated and finished No. 2 in the country.

David was able to learn from Carlos Rogers, a first-round NFL draft pick by the Washington Redskins, and Kenny watched tailbacks Ronnie Brown and Carnell "Cadillac" Williams, another pair of NFL first-rounders.

"Kenny surprised me," Tuberville said. "I thought he was more of a fullback. I never thought in high school that he'd be a pure tailback. When he got here, I said, 'We don't want to play South Carolina if they've got better running backs than this old boy.'"

But Kenny said he still had plenty to learn. When he arrived at Auburn, the coaches were surprised by his inability to block and read defenses. He couldn't recognize a blitz or formations such as a diamond front. So even after Brown and Williams left for the NFL, Kenny started the 2005 season behind Tre Smith and Brad Lester on the depth chart.

Tuberville said Kenny probably would have started the opener against Georgia Tech, but with quarterback Brandon Cox making his first college start, the Tigers' coaching staff knew Yellow Jackets defensive coordinator Jon Tenuta would use a lot of blitzes.

"We tried not to play him, but eventually we got him in the game," Tuberville said.

Kenny ran for more than 100 yards against both Ball State and Division I-AA Western Kentucky, and then scored two touchdowns in a satisfying 48-7 victory over South Carolina, his former team.

When Lester strained his groin against Arkansas in the sixth game, Kenny became the Tigers' every-down back. He averaged 139.4 yards and scored eight touchdowns in the final seven games. Kenny was named All-SEC and his 1,293 rushing yards were the sixth-best single-season total in school history.

"He ran for a bunch of yards against great defenses," Tuberville said. "He makes his own holes.

"He's a determined running back. We've coached Deuce McAllister at Ole Miss and Ronnie Brown and Cadillac Williams here. I'd throw Kenny right there with them. Kenny's got the whole package. He can run inside and outside and run by people. He can catch the ball better."

David, now a senior, becomes the leader of Auburn's secondary this season. He started 11 games last season and had 48 tackles. With another solid season, David is a possible NFL draft choice next year, too.

Off the field, the brothers share an apartment near the Auburn campus. David complains that his brother is messy and doesn't have proper hygiene. Last season, Auburn's sports information department had to separate the Irons brothers during interviews because they spent too much time ripping each other to reporters. Both players say it's all in fun.

"They'll jab at each other and argue and fight," their father said. "But they really love each other."

Both players are happy they're together again.

"We sit back and look at everything that has happened," Kenny said. "I tell David, 'Man, look at everything you went through just to get to Auburn.' The way he struggled in the classroom. A lot of people thought he would never graduate from college. Wow, look at how far we've come."

The Irons brothers hope they still have a long way to go. Their uncle, Gerald Irons, was a defensive tackle for the Oakland Raiders and Cleveland Browns during 1970-79. Another uncle, Leroy Jackson, played running back for the Washington Redskins in the early 1960s. Cousin Grant Irons was a star defensive end at Notre Dame and plays for the Oakland Raiders, and cousin Paul Irons was a tight end at Florida State and plays for the Browns. Yet another cousin, Jarrett Irons, was an All-American linebacker at Michigan.

"I guess it's good genes," David Irons said. "I hope my kids are like that. I hope I don't mess it up. I guarantee you that Kenny will find a way to mess it up, though."