ATHENS, Ga.. -- Perhaps Tony Cole did do something good for the University of Georgia.

If Cole hadn't blown the whistle on academic irregularities and other NCAA violations in the school's basketball program in March 2003, Quentin Moses might have been grabbing rebounds for the Bulldogs instead of chasing quarterbacks this season. 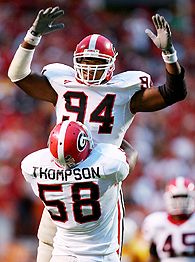 Moses, 22, was a reserve forward on the 2002-03 Bulldogs basketball team that was banned from playing in the SEC and NCAA tournaments. The penalties came after Cole told ESPN that former basketball coach Jim Harrick and his son and assistant coach, Jim Harrick Jr., provided him with improper financial benefits. Harrick Jr. also taught an infamous basketball class at the school, in which the final exam included questions such as "How many points is a three-pointer worth?"

If the elder Harrick hadn't been fired, Moses said there was a pretty good chance he would have played basketball for the Bulldogs instead of football.

"If Coach Harrick was still around, I might not be talking to you here today," Moses said during an interview earlier this month.

At an SEC school where basketball still seems to be a filler between football season and spring football practice, perhaps Cole actually did the Bulldogs a favor. Moses, a 6-foot-5, 250-pound senior, has blossomed into one of the best pass rushers in the country. He had a whopping 11½ sacks, 20½ tackles for loss and 38 quarterback pressures as a junior and nearly entered the NFL draft after the 2005 season.

But the NFL's underclassmen advisory committee projected Moses to be selected in the third or fourth round. So Moses did what his predecessor, former Bulldogs All-American David Pollack, decided to do -- return to Georgia for his senior season.

"I always knew I could improve in a lot of facets as a player," Moses said. "Just being able to be a senior and be one of the leaders of the team made it worth coming back."

Despite his gaudy production, Moses is still a work in progress. He played football and basketball at Cedar Shoals High School, not far from the Georgia campus. Initially, Moses thought he would play basketball in college. He was a Georgia Class AAAA all-state selection in basketball as a senior and played in the state's North/South All-Star Game.

Moses said he had scholarship offers to play basketball at mid-major schools such as Rhode Island, Western Kentucky and Alabama-Birmingham and thought he might sign a national letter of
intent with one of them in the fall of 2001. But when bigger programs such as Duke and Kentucky didn't show interest in him, Moses decided to wait and accept a scholarship the following spring.

By then, Moses had earned the reputation of being a pretty good football player, too. He had played a variety of positions at Cedar Shoals High -- tight end, inside linebacker, outside linebacker and defensive end. Georgia's coaches liked his athleticism, speed and long arms and thought he might grow into a good pass rusher.

By the end of the 2001 football season, Moses had football scholarship offers from Alabama, Auburn, Georgia, Georgia Tech, LSU, Louisville, Maryland and North Carolina. He chose to stay close to home and play for the Bulldogs. 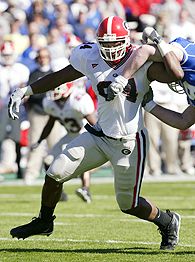 Moses reported to Georgia's campus the following fall looking more like a small forward than a defensive end. He weighed about 210 pounds and was often physically overmatched by stronger offensive tackles. He redshirted during the 2002 season. Moses still wasn't ready to give up
basketball, though, and persuaded Harrick let him join the team midway through the 2002-03 season. He played in three games and was on the verge of getting more playing time when the Cole scandal broke.

Georgia basketball coach Dennis Felton, who was hired to replace Harrick, had recruited Moses for Western Kentucky. But Moses said the fallout from the Harrick scandal made him realize his future was football.

"He was such a talented player in basketball and he wasn't ready to give it up," Georgia defensive coordinator Willie Martinez said. "When he first came here, you could see his athleticism. But I don't know if you were looking at a football player."

In 2003, Moses played behind Pollack and had 37 tackles and 2½ sacks. He went through Georgia's offseason conditioning program the following winter and has gained about 40 pounds during the last two years. Pollack, the school's all-time sacks leader, and Moses formed a formidable pass rush duo during the 2004 season. Moses had 6½ sacks and 17 quarterback pressures as a sophomore, while Pollack was named All-American for the second time and had 12½ sacks despite being constantly double-teamed.

Last season, after Pollack was drafted by the Cincinnati Bengals in the first round of the 2005 draft, Moses got most of the attention from opposing offenses.

"Quentin started buying into football more and by the end of the 2004 season; you could really see his skills starting to come out," Martinez said. "He's really quick and has the long arms. He can bull rush you and out-quick you. Now, he's learning to play at a high gear."

Moses will have to continue to play well for Georgia, the defending SEC champion, which lost six starters on both offense and defense. Moses said Charles Johnson, the team's other starting defensive end, might be the defense's best player. The 6-2, 275-pound junior had four sacks and 28 quarterback pressures last season.

"I'm just trying to keep up with him," Moses said. "When you break it down on film, Charles Johnson is probably the best defensive end in the SEC, if not the country."

At least Moses knows he himself is a better rebounder.