Stories about why Darren McFadden is the best offensive player in the country or how Michigan's Mike Hart never fumbles or how LSU's Glenn Dorsey is the most dominant defender will dominate preseason looks at the 2007 college football season.

But the high-profile stars aren't the only players being discussed in opponents' scouting reports. There are some special specialists around the nation who might not end up in the highlights, but they often prove to be real difference makers in the fall.

While surfing around the Internet during the offseason, Virginia Tech's Jared Develli clicked on a story about possible NCAA rule changes. One proposal really caught Develli's eye: moving the kickoff back five yards to the 30-yard line. 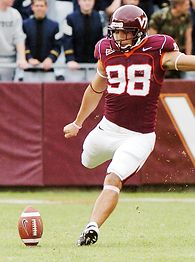 For a guy famous around Virginia for booming kickoffs through the end zone -- he estimates more than half of the 61 percent of his kicks that went for touchbacks went through the end zone -- Develli cringed a little, knowing that more of his boots would get returned in 2007. But then he thought more about it and realized his loss is really Tech's gain because so many other teams won't have guys who can boom it into the end zone any more. Of course, in Develli's case, many of those kicks that went 6 or 7 yards deep probably will be returned, especially since his coverage men will have five more yards to run.

"I'm really not bothered by them moving it back too much," he said. "It shouldn't make much of a difference for me."

The 6-foot, 235-pounder's leg is legendary around Blacksburg, Va. In practice on Wednesday, he nailed a pair of field goals from 70 yards out using a normal three-step setup. A former high school soccer star, Develli says he once scored a goal from 60 yards out. "But I've put on 40 pounds since I last set foot on a soccer field," he said. Develli credits his technique and his flexibility for his power. In the offseason, the Hokies kicker had surgery to repair a hernia, but he says he has regained his flexibility.

His routine is to stretch 15-20 minutes each morning when he wakes up and then twice before practice, warming up his quads and hip flexors. Develli believes his leg has gotten stronger this year, and he's adjusted his steps, going faster and focusing on aiming down the hash because he has a tendency to pull the ball.

Ia Falo walked on to the Boise State football team as a 143-pounder in 2003. Few could've imagined that Falo, now a 5-7, 167-pounder, would emerge as one of the driving forces behind the Broncos' spectacular ride to glory. 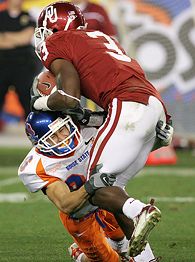 Falo, a former high school wrestler and pole vaulter, was named BSU's most inspirational player after the 2005 season and last year finished with 12 tackles, but that stat hardly tells the impact he has on special teams for the WAC power.

Falo KO'd San Jose State RB Donte Collins with a punishing block on a Boise State kickoff return, although it's his work throwing his body around covering kicks that makes the biggest noise. In last season's ESPN The Magazine college preview issue, an expert calculated that Falo generates the same power as a snowboarder hitting a snowman at 40 mph. No wonder he gets special attention from opponents. Last season, Fresno State even lined up a 245-pound defensive end on the front wall of its kickoff-return unit. As the ball was kicked off, the Fresno defender, rather than retreating to set up a block, raced right toward Falo. However, Falo slipped the block and headed downfield.

In the Fiesta Bowl, Falo made two open-field tackles and almost got a third as the Broncos bottled up a dangerous Oklahoma return game, holding the Sooners to 112 yards on 10 returns.

In addition to Falo's athleticism, Choate says the senior from Idaho is a film junkie. "He spends a tremendous amount of time studying film, scouting the people he's going up against," Choate said. "He really understands return schemes. Plus, he's just got so much flat-out desire and heart." 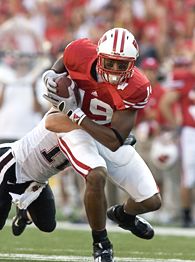 Paul Hubbard had a breakout season in 2006 as a big-play receiver for Wisconsin, catching 38 passes for 627 yards and five touchdowns. Meanwhile, the 6-4, 218-pounder, who joined the team as a walk-on and won the 2003 Big Ten indoor and outdoor championship in the long jump, is a big force in the Badgers' ground game. Last season, Hubbard proved to be the receiver version of Joe Thomas, flattening secondary men and linebackers as he helped pave the way for the Big Ten's leading rusher, freshman P.J. Hill. Todd McShay of Scouts Inc. said Hubbard graded out higher as a blocker than any receiver he's evaluated this summer.

Hubbard's size is only part of the reason he is so effective in the Wisconsin running game, according to Badgers offensive coordinator Paul Chryst.

"Paul's a big guy and he can be really physical," Chryst said. "[Wisconsin wide receivers coach] Henry Mason really hammered it into his head about the importance of being a good blocker and he's really bought into it.

"The other thing that really helps is that he's such a smart guy and he understands what we're trying to do, so whether that means cracking on a safety or reading a coverage, he knows how to put himself in position. And it is something he really does take pride in. When I saw him after the season, I asked, 'What are some things you need to get better at?' The first thing he mentioned was his blocking."

The Best Receiver Going Across the Middle 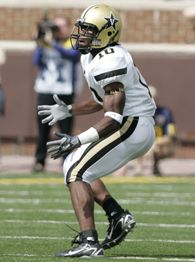 Earl Bennett is predictable. Every defensive coach in the SEC knows what Vanderbilt likes to do with Earl Bennett. He is going to run hooks, find seams in zones and sit down in the middle of the field and outmuscle defenders. The Commodores' bread-and-butter is to run a receiver shallow and sit down to bait the defense, and then throw the ball to Bennett coming behind him. Rival teams know who and what is coming, but Bennett still does his damage.

In two seasons at Vandy, Bennett's numbers are amazing: 161 receptions, 2,022 yards, 15 TDs. He became the first receiver in SEC history to catch at least 75 passes in each of his first two seasons. Bennett says he relishes his role as a go-to guy and has no qualms about going into traffic. "It's just part of being a complete receiver," he said.

"The guy is just a great player," said Ole Miss linebackers coach Dave Corrao. "He's not the biggest player. He's not the fastest player. Yet he just continues to make plays. We all know he's the guy you have gotta stop, and he's still such a productive guy. The key is they really do a good job moving him around well." 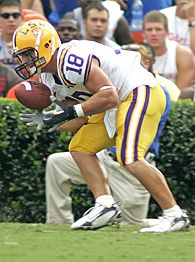 Jacob Hester came to Baton Rouge, La., last year with the fewest accolades of any of LSU's talented backs, but none was more valuable to the Tigers. Hester led the Tigers in yards rushing last season and caught 35 passes, the third-highest total by an LSU running back in school history.

A bull-strong 230-pounder, Hester has always had soft hands. In his senior year at Shreveport powerhouse Evangel Christian, Hester played some at wide receiver (47 receptions, 523 yards, four touchdowns). Texas Tech even recruited him as a slot receiver.

"He's the most complete back in the SEC," said one league coach. "He reminds me a lot of [former Tennessee Titans standout tight end Frank] Wycheck because he's such a natural receiver, and when he gets it, you don't want a guy that size rumbling into your secondary." 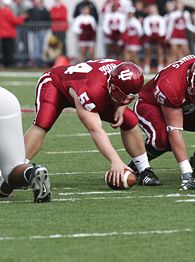 Long-snapper Tim Bugg is perfect, or so say the folks around the Indiana football program. The 6-0, 250-pounder, a fifth-year senior, has gone his entire college career without a single wayward snap. Todd McShay of Scouts Inc. takes the praise even further, identifying Bugg as the country's top long-snapper.

Hoosiers special teams coach Gerald Brown won't argue that point, saying Bugg is as good as he's ever been around in his 22-year coaching career.

"He really puts so much time into it and takes a lot of pride in it," Brown said. "He's so quick and so accurate, and he's not a bad cover guy for us either."

Brown says the benchmark for a good snap back to the punter is eight-tenths of a second. Bugg zings it back there usually in .7 seconds. "I have heard of a couple guys who have been a little faster than that," Brown said. "But those guys are pretty rare."

No defensive coordinator causes more headaches for an opposing quarterback than Georgia Tech's Jon Tenuta, who loves to attack with his myriad of blitz packages. Tenuta has groomed more than his share of standout linebackers. He's got another gem in senior middle linebacker Philip Wheeler. 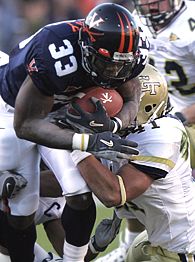 Wheeler, who stands 6-2 and 230 pounds, has played all three linebacker positions for the Yellow Jackets, serving as a free-wheeling force coming off the weakside, tracking tight ends from the strongside and anchoring the middle as he does now.

Wheeler isn't a big talker or an oversized personality, but he is an explosive athlete who has really matured since coming to Tech. Three years ago, he was undisciplined and frequently was caught out of position. Last season, Wheeler became more of a thinking man's linebacker and fit well into this scheme. His timing is often impeccable; Tech loves to get Wheeler matched up on backs after he flies in on a delayed blitz behind stunting Yellow Jackets D-linemen. Last season he notched nine sacks, and the havoc he caused probably led to twice that many.

"He's a freak of an athlete," said a line coach whose team played against Tech last season. "You don't want to have him matched up with your tailback, but [Tenuta] does such a good job with his pressure packages, that's usually what you're stuck with. And then Wheeler just tosses your guy. He's really good with his hands.

"He was the best linebacker we saw last season."

Bruce Feldman is a senior writer with ESPN The Magazine. His new book, "Meat Market: A Season Inside College Football's No. 1 Recruiting Machine," is on sale now.