LOS ANGELES -- Patrick Turner arrived at USC two years ago with the fanfare accorded a top high school recruit. Here came a 6-foot-5 wide receiver from Nashville, Tenn., who -- like the similarly sized Dwayne Jarrett two years before -- would step off the plane and into the starting lineup. Add uniform and stir: instant star. 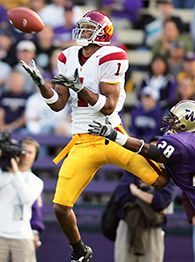 That didn't happen. Life isn't that easy, especially at USC, where the scout team is filled with high school phenoms.

Turner remained an understudy to Jarrett and Steve Smith for two seasons. There's no shame in backing up receivers who became NFL second-round draft picks this past April. But the reality of standing on the sideline for two seasons can grind down any high school stud who has been wooed by the top coaches in the country.

"He had lost some of that self-confidence," offensive coordinator Steve Sarkisian said. "These guys have been making a lot of plays. I think he kind of saw it, well, realistically: 'I'm not going to beat these guys out.' That wasn't the right mentality for him to have, because he's a tremendous competitor. We fought that a little bit with him, to get it back out of him."

Turner had to adjust to being a long way from home. He had to adjust to the speed and complexity of the college game, where 7-yard routes can't be cut off at 5 yards because it's crowded. He had to learn that being the hot receiver didn't mean he caught a lot of passes, but that he better recognize the blitz and look for the ball.

Turner remembered the coaches telling him that being the hot receiver meant he was protecting the quarterback, and thinking, "I'm blocking on this play?"

"You have to be aware every down," Turner said. "When you get out there, and you're playing against somebody, there's people in front of you, there's people flying around. You got to make sure you see that before the play happens."

Sarkisian took some comfort in Turner's performance last season against Washington. With both Jarrett and Smith injured and out of the game, Turner started and caught 12 passes for 116 yards and one touchdown as USC eked out a 26-20 victory. Neither Jarrett nor Smith nor any other Trojan matched that number of catches in a game last season.

Nevertheless, Sarkisian took more comfort this spring, when the spunk that Turner showed in his first couple of weeks as a freshman reappeared, and in a smarter, stronger body.

He's having a great summer. He's taken our young receivers under his wing. He's teaching them. Nobody knows more of the offense after John David Booty and Mark Sanchez than Patrick Turner.

"We really challenged him, and he really had a tremendous spring," Sarkisian said.

"And all he has done is carry that right into the summer. He's having a great summer. He's taken our young receivers under his wing. He's teaching them. Nobody knows more of the offense after John David Booty and [backup quarterback] Mark Sanchez than Patrick Turner. This is his third year. He knows what's going on, and when a guy can coach what we're doing, that generally means he can play what we're doing."

Turner said he learned from Jarrett, Smith and Chris McFoy, a dependable backup who played his senior season a year ago.

"I just soaked everything in I could from those guys, whenever I could," Turner said. "Steve had great routes. He was a smart player. Getting in and out of his break, he was really good at that. He was like a mechanic at his route-running. DJ: catch everything. He'll go up and get the ball, more like my body type. McFoy, he was a great blocker, a tough player."

Now it's Turner's turn. Booty is convinced that Turner, even with a total of one start to his name, will not only fill the position of X receiver but also will be Booty's go-to target.

"Hands down, he's our guy, our playmaker," Booty said. "The thing is, he could have been that for quite some time here. He just happened to have a guy in front of him [Jarrett] that was pretty good, you know?  Anywhere else he would have been a [third]-year starter already. That's kind of the risk you take in coming to SC."

Booty, a redshirt senior from Shreveport, La., and Turner have bonded under the locker-room assault they get because of their Southern accents. Twice Booty found Turner for touchdowns in the Trojans' second preseason scrimmage on Aug. 16. It might have taken two years, but Turner's journey from Tennessee to California is over. More precisely, he has arrived.