Wake Forest, which had won just one ACC title in its first 53 years in the league and never had won more than eight games in a season, finished 11-3, won the ACC championship and became perhaps the most unlikely BCS bowl participant in history.

So what will coach Jim Grobe and his Demon Deacons do for an encore?

Try to win the ACC again, of course.

Grobe's expectations have been curtailed a bit in the seven months since Wake Forest lost to Louisville 24-13 in the FedEx Orange Bowl. All-ACC middle linebacker Jon Abbate, the heart and soul of a defense that ranked 12th nationally in points allowed, left school to enter the NFL draft and went undrafted. Starting safeties Josh Gattis and Patrick Ghee graduated, and junior Eric Berry, the player Grobe expected to replace Abbate, was ruled academically ineligible.

"I still feel pretty good about where we are," Grobe said. "But I'm a little bit anxious because I think we've got an experienced offense and an inexperienced defense. I'd like to have it the other way around."

But it's not as though the Demon Deacons haven't faced similar obstacles before. Wake Forest overcame huge personnel losses in 2006 before putting together one of the most remarkable seasons in college football history.

Somehow, the Demon Deacons were able to pick up the pieces and win nine of their first 10 games. They lost to Virginia Tech 27-6 late in the season but beat Maryland 38-24 to win the ACC's Atlantic Division.

Wake Forest's 9-6 victory over Georgia Tech in the ACC championship game was a microcosm of the team's improbable season. The Demon Deacons played stingy defense, especially in the red zone, and did just enough on offense to win. 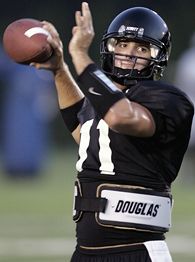 Certainly, the Demon Deacons will face higher expectations in 2007. But Grobe doesn't believe his team will face increased pressure, at least not from the people close to the program.

"The great thing about Wake Forest is that whatever we do, it's appreciated," Grobe said. "We don't have spoiled people at Wake Forest."

But ACC opponents would be naive to think the Demon Deacons are satisfied.

"You look at all the other schools and they're powerhouses," said center Steve Justice, an ESPN.com preseason All-American. "People look at us and think, 'Little old Wake Forest.' I think a lot of people do think we're a one-year wonder. They have a right to think that because if you look at our history, it's not very good. But with the team we've got coming back, I think we can do it again."

But the 2007 Wake Forest team will be markedly different from the one that won 11 games a year ago. With so many holes to fill on defense, the Demon Deacons have to be more efficient and explosive on offense.

Skinner is a more polished passer after finishing 10th in the ACC in total offense last year. He completed 65.8 percent of his passes for 2,051 yards with nine touchdowns and five interceptions last season. Skinner never faced a competition to keep the job this spring after Mauk transferred to Cincinnati.

"When it comes down to close situations in close games, I can be a lot calmer than before," Skinner said. "I have more experience. My film study has been big this summer, and I'm trying to get my eyes right for our passing game. We've been doing a lot better this summer with our offense, but we have a long way to go."

The early reports on Andrews have been encouraging, too. Andrews, the son of former Atlanta Falcons running back William Andrews, is running with confidence after missing spring practice to rehabilitate his knee. Andrews ran for 254 yards in his first of only three starts in 2005, then had 142 yards in last season's opener against Syracuse.

Senior Kenneth Moore, who bounced between tailback and receiver after Andrews was hurt last season, moved back to receiver full time. The Demon Deacons have to replace top wideouts Willie Idlette and Nate Morton.

Wake Forest returns one of the most experienced offensive lines in the ACC, and that figures to be the team's strength. Two of the returning starters -- Justice and left guard Matthew Brim -- have been in the lineup since 2004. Left tackle Louis Frazier started all 14 games last season, and right tackle Jeff Griffin and right guard Chris DeGeare played very well as freshmen.

Defensively, the Demon Deacons have several key players to replace. Along with Abbate and the safeties, defensive end Jyles Tucker and two other starters must be replaced. But Robinson's return should bolster the pass rush; he totaled 72 tackles and 7½ sacks in his first two seasons.

With so much inexperience on defense this season, Grobe said, the team will have to change the way it plays.

"I think we came in last season with the thought that we had the ability to be very productive with our offense, but then we lost Ben Mauk and Micah," Grobe said. "I think the best thing our offensive staff did was take the stance that we aren't going to beat ourselves. So a lot of the things that we could have possibly done on the drawing board -- score points, be more productive yardagewise -- was the kind of risky stuff that gets you beat.

"This year, I would expect us to be more productive offensively, but we still don't want to get to the point that we turn the ball over too many times and beat ourselves."

That was Wake Forest's recipe for success last season. It was so effective that Wake Forest's coaches spent much of the spring revealing their secrets to other coaches from around the country.

"The first few years, you couldn't have found a visiting coach with a search warrant," Grobe said. "Now, it's like a 'Ben-Hur' movie. It's a cast of thousands."

It's that same mix that will prevent Wake from proving itself a one-year wonder in 2007.

"We expect to win every game now," defensive end Jeremy Thompson said. "Some people do think it was a fluke, but we don't."